An enhanced judicial system is the need of the hour: VP Jagdeep Dhankhar 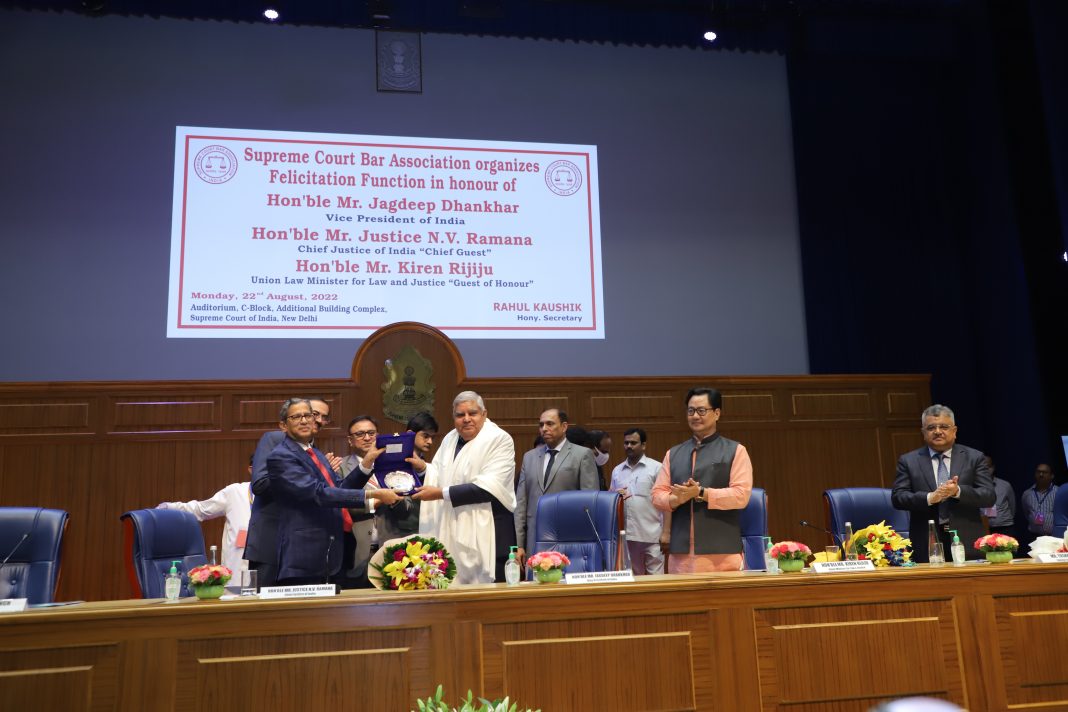 The judicial system of the country needs to be enhanced, to ensure justice for sections of the society, Vice President Jagdeep Dhankhar said on Monday.

Speaking on the occasion, Mr. Dhankhar said he had never thought in his wildest dreams that he would achieve such great heights in his career one day.

He said, “I’m forever indebted to 41st Chief Justice of India R.M. Lodha, along with Supreme Court Judges Justice Dinesh Maheshwari and Justice Ajay Rastogi, for supporting me during my days as a lawyer in the Apex Court.”

He said hard work, honesty and sheer determination made him the person he is today.

Talking about the legal fraternity, the Vice President said he missed the intellectual conversations and discussions with his fellow lawyers.

According to Mr. Dhankhar, both media and the Bar have a great role to play in the development of the country. All institutions need to work in harmony and unison for the growth of the country.

Speaking on the occasion, CJI Ramana said Mr. Dhankhar has always had a deep connect with the people. He has lived shoulder to shoulder with the common man. He had humble beginnings. He is son of a farmer. He used to walk six kilometers from his village to attend his school. All through, he maintained live contact with his roots. Simplicity and hard work, which are synonymous with rural life, are his constant companions.

According to the CJI, “It is on the strength of our democracy that Dhankhar ji could reach the second highest office in the country, in spite of hailing from rural background and without having any political father or Godfather. His elevation is a tribute to our healthy democratic traditions and rich constitutional values.”

He said it was testimony to the fact that the progressive Constitution of the country provides opportunities to all, irrespective of caste, creed, religion, region and financial status.

As per the CJI, “In the Constituent Assembly and in the early days of Parliament, the House was dominated by legal professionals. As a result, we got outstanding Constitution and flawless laws. Now-a-days, the number of lawyers has dwindled and that space is taken by others.

“With Dhankhar ji’s experience and guidance from the Office of Chairman, I hope and believe that the quality of laws would certainly improve,” he added.

The CJI said the legal community has made great contribution in the freedom struggle and in framing of the Constitution.

Speaking on the occasion, Pradeep Rai, Vice-President of the Supreme Court Bar Association (SCBA) Pradeep Rai said Mr. Dhankar was one of the youngest lawyers to join the bar. He always had the mentality of philanthropy. He opened a coaching institute for English in his village and also worked for the upliftment of women in his village.

He further said that Mr. Dhankar was a great personality, who was even liked by opposition members, including West Bengal Chief Minister Mamata Banerjee. Dhankarji even did pro bono cases for journalists. His village has always celebratesd his success, starting from becoming a Judge in the Rajasthan High Court to the Supreme Court, to the second highest power position of the country, added Mr. Rai.

He said, “Sir, you are a great motivatrion for all of us. Like you, I also come from a humble background. We feel proud to welcome a member of our own family here.”

During the felicitation function,the Solicitor General Tushar Mehta said he is glad of the fact and equally proud that Shri Dhankar rose to the highest position of power.
He added that it is a matter of immense pride that Shri Dhankar is the first lawyer to become VP of India. Congratulating the new Vice President he said this should mark as a new beginning for his next innings.

The Union Minister Rijiju in his speech said that he still misses the golden times of Atal Behari Bajpayee era, when the quality of debates were remarkable.
Rijiju said he is sure the times will return and the Rajya Sabha will become more assertive and less noisy which it has turned now, under the guidance of Dhankarji. He added that Dhankarji will be an added asset for the parliament and country.