Judiciary has evolved to give a new direction to India: PM Modi 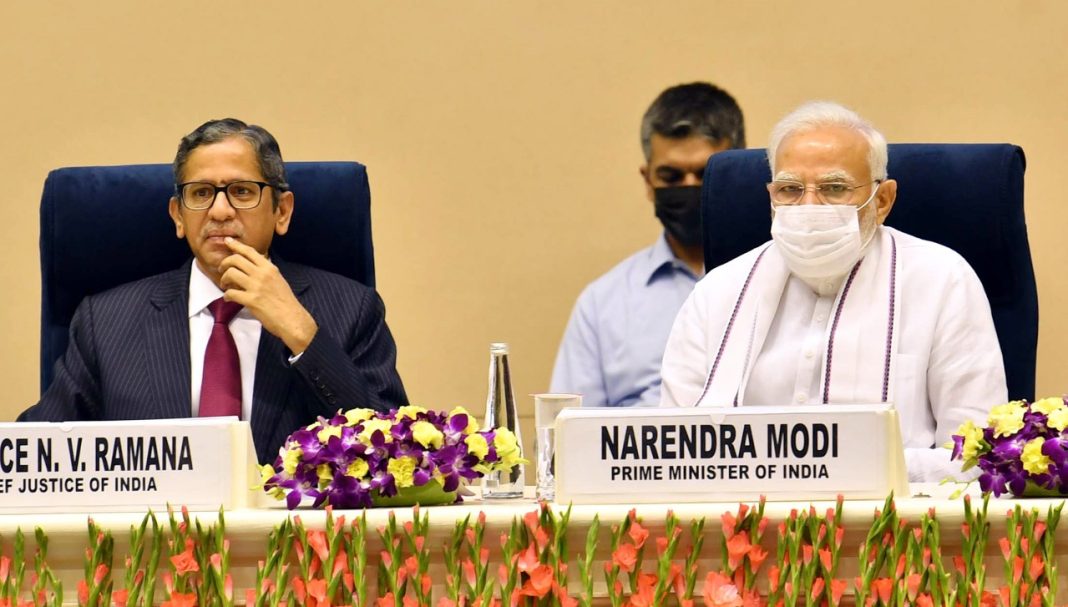 Inaugurating the joint conference of Chief Justices of High courts and Chief Ministers of all the Indian states India, the Prime Minister Narendra Modi said that as India steps into the 75 th year of its Independence , it has been time and again proven how the roles of Judiciary and Executives have evolved to give direction for a new India.

The PM further said that government of India considers the importance of technology in the Judicial system which is an essential part of Digital India Mission.

Addressing the legal luminaries and Chief ministers of different places , he appealed for giving the priority to the undertrial prisoners on basis of humanity and law.

Prime Minister Narendra Modi on Saturday said local languages should be promoted in courts to strengthen the connection between a common citizen and the judicial system as the complexities of the law can be difficult for a common man to understand. Easy and quick availability of justice should be the common goal of the system, he added.

Speaking at the joint conference of Chief Ministers and Chief Justices of High Courts at Vigyan Bhawan in New Delhi, he said,

Talking of the legal education scenario, PM added that subjects like blockchains, electronic discovery, cybersecurity, robotics, AI, and bioethics which are taught in law universities globally, should now be added to the Indian curriculum.
PM Modi added that in 2015, the Union government had identified about 1,800 laws that had become irrelevant, of which 1450 have been abolished by the Centre, but only 75 laws have been abolished by the States.

The Prime Minister said the judiciary is the guardian of the constitution whereas the legislatures represents the aspirations of the citizens. A union of these two can create a roadmap for an effective and time-bound judicial system.

Modi said this calls for an “amrit kal” (golden time) of our vision where “with the help of CMs and CJs we should ensure a justice system that is easy and quick for all”.

The PM posed a question before the gathering. “In 2047, when the country will complete 100 years of its Independence, what kind of judicial system would we like to see in the country?” He said we all need to focus on making our judicial system so capable that it can fulfil the aspirations of the India of 2047.

According to the Prime Minister’s office, the Joint Conference is an occasion for the executive and the judiciary to come together to create frameworks for simple and convenient delivery of justice and to discuss steps required to overcome the challenges facing the justice system. “Since then, the government has taken various initiatives for improving infrastructure and integration of digital technology in court processes under eCourts Mission Mode Project,” reads the official statement.