“Justice Indu Malhotra was both a speaking and a listening judge” 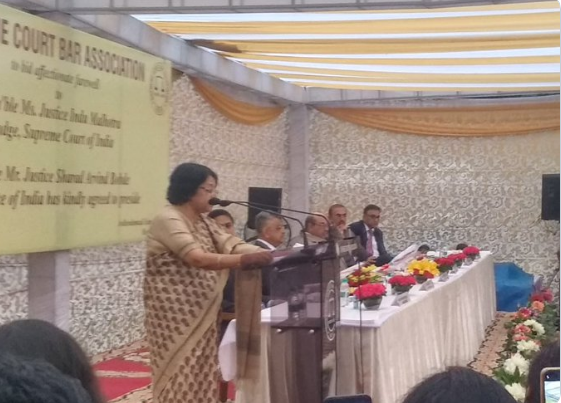 In her remarks to the gathering, Justice Malhotra said, “What I found overwhelming was the volume of cases the judges deal (with) in a week. I used to sit with Justice Nariman and there were 68 matters on a Monday.”

“I have found judgeship to be a great learning experience. However, one learns as he goes, like from the colleagues on the bench and the arguments made by the members of the bar. Within three months, I got a chance to be on a constitutional bench…the moment, when the Section 377 judgment was read out, the emotion that swept through was moving. Parties broke down as it gave legitimacy to their relationships,” Justice Malhotra said.

“My message to the younger members of the bar is to work well. It is necessary to keep yourself apprised with the latest judgments to give your best services to your client. I believe in meaningful gender parity and not merely the symbolic one. I believe that the number of woman judges would grow when more and more women take up a career at the bar. The biggest challenge that women lawyers face are the balance of work and life relationship and especially at the time of childbearing,” she said.

“Being the single woman judge increased my responsibility as it would pave the way for many other woman judges. It is not uncommon for us to have an SLP over a long adjournment in a case by the High Court… Such petitions I think were not that useful and were a mere waste of judicial time.”

Justice Malhotra addressed thanks to the Registrar and other judicial staff. “The Registry staff is a very important part of the judiciary especially at the times of the pandemic. Without them, functioning would have been a tough task,” Justice Malhotra said.

Justice Rohinton Fali Nariman, who addressed the gathering, said he will call Justice Malhotra Indu since he has interacted with her as a counsel, a senior advocate and a judge. “She is a master of arbitration laws along with other laws, and her book is an absolute delight,” he said.

In his address, SCBA Vice President Senior Advocate Pradeep Rai said, “Sometimes, we wish retirement age of Hon’ble Judges should be 70 years, we feel it more when a Judge like Justice Indu Malhotra, who is an icon of our Bar, demits office. On behalf of the members of the Supreme Court Bar and Executive Committee let me express our feelings that we all are certainly going to miss Hon’ble Justice Indu Malhotra.”

“Hon’ble Justice Indu Malhotra’s father Om Prakash Malhotra was a senior advocate in the Supreme Court and an author who brought out the treatise on the Law of Industrial Disputes,” Rai said.

Recounting Justice Malhotra’s achievements, Rai said she was the topper at AOR exams in 1983, and the first judge to be promoted to the Supreme Court directly from the Bar.

She has maintained a bold standard in her judgment and has not got carried away to general norms while passing judgments, he added.

Rai said Justice Indu Malhotra specializes in the law of arbitration, and has appeared in various domestic and international commercial arbitrations. In December 2016, Indu Malhotra was made a member of the High Level Committee (HLC) in the Ministry of Law and Justice to review Institutionalization of the Arbitration Mechanism in India.

“Throughout her tenure as a Supreme Court judge, Justice Indu Malhotra has given exceptional judgments with her expertise and dedication, which has helped in changing the public perception and outlook with advancing times. She has maintained a bold stand with her opinions while delivering judgements. She has never been one to be swayed by varying opinions. Justice Malhotra has made the mark as a judge who has been a stickler for principles of law and not afraid to express her point of view,” he added.

“The Bar greatly appreciates Justice Malhotra as a judge, as she was both a speaking as well as a listening judge. This gave an opportunity to the lawyers to clear points raised by her,” he added.

Rai ended his speech thanking all who participated in the farewell. “Madam, Justice Indu Malhotra, we refuse to accept your retirement. We shall keep you busy in several years to come and I am sure that much more is coming in the kitty of your achievements,” he said.

Solicitor General Tushar Mehta, who addressed the gathering with a welcome note, said, “The unanimous verdict of the Bar is that Your Ladyship would be missed and loved by all. When I think of her Ladyship, I think – Energetic Lawyer, Brilliant Judge, Graceful Lady and Brilliant Human Being.”

“We had good judges, great judges, ones we were fond of, Justice Malhotra didn’t walk the ordinary path, she didn’t only implement the law but also enhanced and upgraded it. Her not so long legal career would have an everlasting impact. We will miss the judge who would feel bad for dismissing a matter without merits,” he said. SG Mehta extended the gratitude on behalf of Government of India, Attorney General to Justice Malhotra.

“Well said by my friend Pradeep Rai, the Bar keeps on judging the judges throughout, however the final judgement comes from the Bar on the day of the judges’ retirement. Unanimous verdict of the Bar is that Your Ladyship would be missed and loved by all,” Mehta said.

It’s almost a year since the SCBA held a physical farewell for a Judge retiring from the Supreme Court, as both the Bench and the Bar were constrained to adopt virtual systems due to the Covid-19 pandemic.