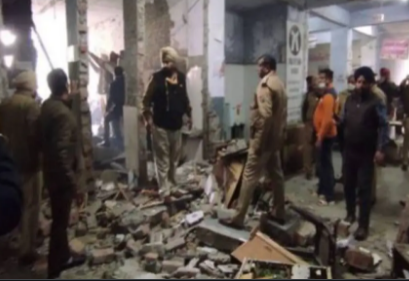 The Chief Justice of India Justice N.V. Ramana expressed deep shock at the blast that occurred in Ludhiana District Court Complex on Thursday in which two persons were killed and several injured.

Expressing his grave concerns at the lack of adequate security in court complexes, he hoped that the law enforcing agencies will pay necessary attention to ensure protection for the court complexes and all the stakeholders.
He observed: “Such incidents occurring in quick succession across the country is a worrisome trend.”
Justice Ramana called upon Chief Justice of Punjab and Haryana High Court Justice Ravi Shankar Jha and enquired about the development.
He also offered condolences to the bereaved members of the family of the deceased and wished speedy recovery of those injured.

The Punjab and Haryana High Court has also taken note of the blast. On the other hand, the Union Home Ministry has also sought a report from the Punjab government on the blast.

Bhullar said the explosion was heard near the Record Room on the second floor of the Ludhiana Court complex. The blast took place around 12.20 pm.

Punjab Chief Minister Charanjit Singh Channi said the state government has been put on alert and he was going to Ludhiana. He said some anti-national elements were doing such acts as Assembly elections are nearing. Those found guilty will not be spared, he said.

The Ludhiana court blast has come at a time when the safety and security of lower courts and judges of subordinate courts is coming under stress. Weeks ago, a mysterious explosion was reported in Delhi’s Rohini court in which Delhi Police this week arrested a DRDO scientist for masterminding the conspiracy to get even with an advocate.

Earlier in September, again in the Rohini court, gunmen in lawyers’ garb shot dead Delhi’s wanted gangster Jitendra Gogi inside the court. The attackers, dressed as lawyers, opened fire on Gogi and killed him on the spot. They were also shot dead by security personnel.

In July, Jharkhand additional district judge Uttam Anand died after he was hit by an autorickshaw in Dhanbad. Later on, the Central Bureau of Investigation has taken over the inquiry.

The matter of security of the judges and the court premises has taken the utmost importance as the Delhi High Court is hearing a petition seeking enhanced security in district courts.

The Supreme Court is also hearing a suo motu case concerning judges safety which it had initiated after the death of Jharkhand judge Uttam Anand. The Jharkhand High Court is now monitoring the probe.