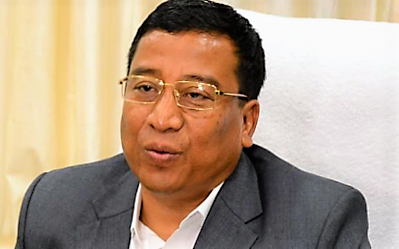 The Speaker of Manipur assembly Y. Khemchand, has disqualified BJP MLA Thounaojam Shyamkumar from being a member of the legislature on the grounds of defection.

The Speaker in his order has clearly mentioned, “it is established beyond doubt that the respondent had voluntarily given up the membership of the Indian National Congress. Hence, this Tribunal came to the conclusion that the respondent had clearly violated the provision of the Tenth Schedule of the Constitution of India and is liable to be punished as per the provision of the Constitution to uphold the dignity of democracy and the mandate of the people. I, therefore, hold that the respondent Shri Thounaojam Shyamkumar, Member of the Manipur Legislative Assembly, 7-Andro Assembly Constituency, Manipur had incurred disqualification for being a member of the Manipur Legislative Assembly”

The matter had earlier come before the Supreme Court, in January, when the court had directed the Speaker to take a decision in the matter within a period of 4 weeks. But on 18th March it was observed by a bench of Justices RF Nariman and Ravindra Bhat that the speaker had not taken any action. They passed an order restraining Shyamkumar from entering the Assembly.

The Manipur Assembly Election of 2017 resulted with the Indian National Congress getting 28 seats and the Bhartiya Janta Party getting 21 seats. The BJP later aligned with the National People’s Party, Naga People’s Front and Lok Janshakti Party along with Shyamkumar crossing over to BJP, to form the Government.