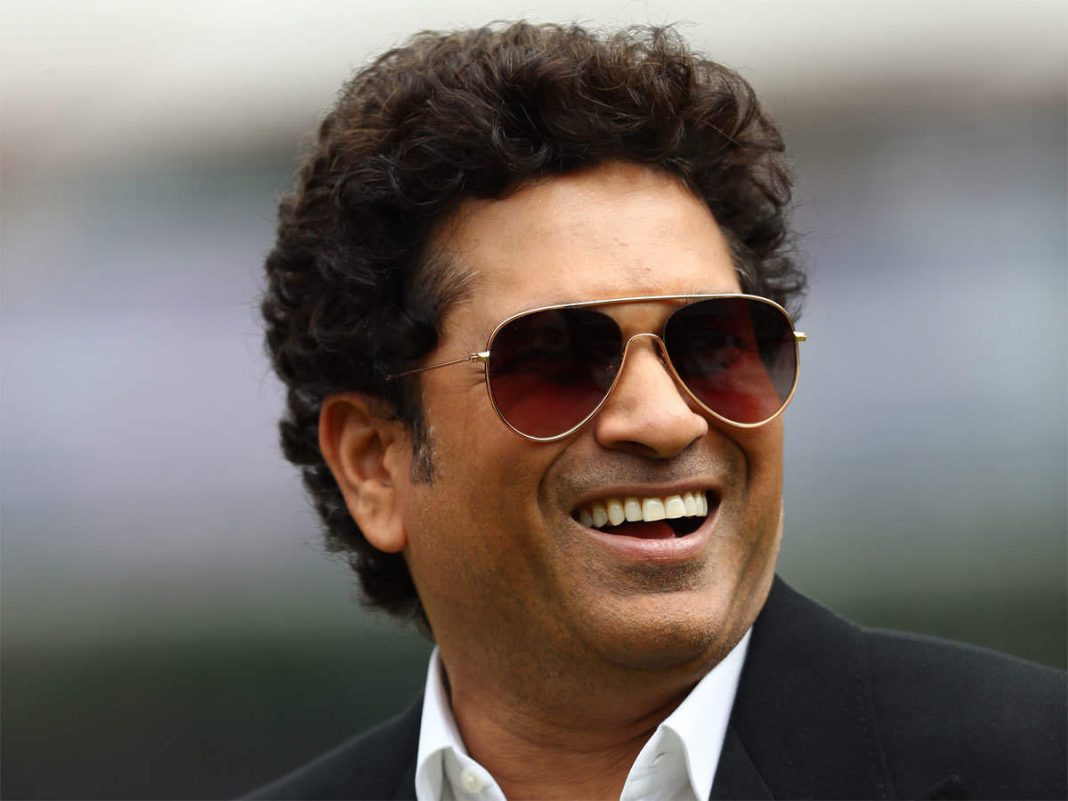 When pacer Mohammad Shami gave away too many runs in the 2021 T20 World Cup match against Pakistan and was trolled mercilessly on communal lines, none of his teammates came out to defend him. That task fell to Sachin Ramesh Tendulkar, and without fail he stood in support of the beleaguered pacer being called names and worse. Once he had done so, others like Virender Sehwag also joined in.

Sachin Tendulkar was born on April 24, 1973 to Rajani and Ramesh Tendulkar. His father was a writer and a college professor, and his mother worked for a life insurance company. On May 24, 1995, Sachin married Anjali Mehta, whom he had first met in 1990. They have a daughter, Sara, and a son, Arjun. With his hard work and dedication on and off the pitch, Sachin Tendulkar has become one of the richest cricketers not just in India, but the whole world with a total worth of more than Rs 1,110 crore.

Sachin Tendulkar was named after his father’s favourite music director, Sachin Dev Burman, but he did not have the inherent gift of singing. Although, he did prove himself to be a standout athlete time and time again.

At the young age of 11, he was given his first cricket bat, and with his impeccable knack for sports, his outstanding journey towards becoming the world’s greatest batsman began.

As a child, Sachin was often labelled notorious and mischievous as he picked fights with other children. It was Sachin’s elder brother, Ajit, who recognized his cricketing ability and introduced him to Cricket in 1984, which also curbed his mischievous tendencies. His brother introduced him to Ramakant Achrekar, a famous cricket coach at Shivaji Park, Dadar.

Achrekar was enthralled with Tendulkar’s flair and talent, and advised him to change schools to Sharadashram Vidyamandir (English) High School, a school at Dadar, which had a strong and leading cricket team, and had created many noteworthy cricketers. After high school, Tendulkar was enrolled in Kirti College, where his father was also a professor.

He was trained under the supervision of Achrekar at Shivaji Park in the mornings and evenings. He would practice for hours on end in the nets. If he ever became weary and tired, his coach would put a one-rupee coin on the top of the stumps, and the bowler who beat Tendulkar would get the coin, and he did so to keep their energy maintained; if Tendulkar went without getting dismissed, the coach would give him the coin. In the present day, Tendulkar claims to consider the 13 coins he won then as some of his most prized possessions.

He was considered a child prodigy, and his reputation was built in the early years circumscribing that.

Sachin Tendulkar, as an epitome of a gentleman, on-field and off the field, has always honoured cricket lovers all over the world with his strokes and has also contributed to society outside his profession.

Sachin Tendulkar has sincerely dedicated himself to many activities of philanthropy during his career and continues to do so after his retirement, as well.

Sachin Ramesh Tendulkar is not only respected and admired for his exceptional work on the cricket field but is also treasured for his values as a human being. While being one of the best-paid cricketers on the planet, the Little Champ also gives back a lot to society. He is truly a hero we can all look up to.

He has made donations for over Rs 4 crore in the past few years in several foundations, associations & trusts like:-

Sachin is a brand ambassador for some major companies, who are playing a key role in filling Sachin’s fortune.

SRT Sports Management Pvt. Ltd. (SRTSM) is an organization run by Sachin Tendulkar and his team. The organisation was founded by him and his wife Dr. Anjali Tendulkar and carries forward commercial and social activities involving the master blaster as a leading face. None other than Sachin has the right to represent the organisation in India and across the world as well. Other entities and individuals have no right or authority to represent this organisation. SRT SPORTS MANAGEMENT PRIVATE LIMITED has an authorized share capital of Rs 1,00,000 and its paid-up capital is Rs 1,00,000.

The main and foremost vision of the organisation is to fulfil the dream of Sachin, transforming the country into a sport playing nation from a sports-loving nation. The main mission of the organisation is to build a positive impact on society through partnerships with brands and by doing social work and to carry forward the legacy of Sachin by inculcating the values of trust, transparency and performance in the youth.

Dr Anjali Tendulkar: Sachin’s wife, she’s a paediatrician and a philanthropist by profession. After putting aside her career in medicine, she helped her husband throughout his career. She is the founding member of the SRT Sports Management Pvt Ltd.

Mrinmoy Mukherjee: He is the director and CEO of the organisation and he possesses immense experience in the business. He has worked with many many reputed firms including Marico, Aditya Group, Star TV, Raymond and Tata housing.)

Venkataraman: He is the general manager and has good experience in understanding consumer behaviour and converting them into actionable insights.

Athul Pillai: He has a vast experience in the brand management and analytical consulting, breaks down complex challenges into simple components to drive favourable outcome for the business.

Minal Vaidya: She is an expert in accounting, taxation and compliance practices. She is working with Tendulkar since 2001.

June Fernandes: An expert in administration, planning and human resources. She has a vast experience in the hospitality field.

To have a meaningful impact on the life of needy people and to raise awareness about issues related to human and environment, some social initiatives are undertaken by the organisation. Some initiatives are-

Sachin had a great career from 1989 to 2013, approximately 24 years. He made his debut against Pakistan and played his last Test match against West Indies in 2013 in Mumbai. His jersey number was 10. He has played under various teams and clubs namely:

He was Rajya Sabha member from 2012 to 2018. He was nominated to the Rajya Sabha from sports. He became the very first to join the honorary rank of Group Captain in Indian Air Force without aviation background. He was included in TIME Magazine’s list of 100 most influential people of the world. In 2019, Sachin was included in the ICC Hall of Fame among other big cricketers.

Some of the great records made by Sachin are in ODI, He was the first cricketer to score double century in GWALIOR against SOUTH AFRICA, scored highest no. of centuries (49), He has scored most centuries in a calendar year (9), most no. of boundaries 2016.

In test cricket he has scored highest no. of centuries (51), he is leading run scorer in test cricket around Fifteen Thousand runs and he has won highest man of the match award in tests which is a record till now.

As being a renowned cricketer and celebrity he endorsed many brands among his first was BOOST (drink) and several other brands like BMW, Castrol India, Sunfeast, Luminous India, Fiat Palio, Britannia, Airtel and many others. His net worth is around 1110 Crore INR, and his salary is around 50 crores. He owns many big luxury cars among them famous are Ferrari360 Modena, Nissan GT-R, BMWi8, Mercedes BENS, BMWM6 and many others. He is fond of many cars like other big celebrities.

He is one of the richest cricketers of India & currently director of many some major companies namely.

Many companies are owned/ operated by Sachin & his wife Anjali in their respective names & some companies in their joint names. They have many other pa

Sachin has many bank accounts in India & Overseas & invest a Financial interest as well. He has an account in KOTAK MAHINDRA BANK&ICICI BANK in his name &KOTAK MAHINDRA BANK, Bank of India, IDBI Bank &HDFC Bank in his wife Anjali Sachin Tendulkar’s name. Moreover, they both have many overseas accounts as well. Sachin has 2 bank accounts in Royal Bank of Scotland Group Coutts & Co.in United Kingdom with an average balance of 20 Lakhs for the financial year 2020-21, he also has 4 Bank Accounts in Standard Chartered Bank (GBP) in Jersey Chanel Island (which is also famous & considered as Tax Haven) with an average balance of 7 crores for the financial year 2020-21& Sachin also has a bank account in Barclays Bank PLC in Isle of Man which was opened in 2016 with a balance of about 14 crores.

Sachin has also invested in several Financial interests like Cricket All-Stars League Pte.Ltd in Singapore, Saas International Limited in the British Virgin Islands, where he has invested a total of around 4 cores, whereas his wife has also has made an investment of about 6.6 crores in the same. (As per “Paradise Papers” British Virgin Islands corruption scandal threatens its dependable tax haven reputation)

Sachin has several properties on his name in Mumbai, Pune & Banglore namely

Meanwhile, there are several other properties in Sachin’s wife Anjali Sachin Tendulkar’s name:-

Sachin is one of the richest cricketers not just in India, but the whole world with a total worth of more than Rs 1,110 crore.

Did you find apk for android? You can find new Free Android Games and apps.
Share
Facebook
Twitter
Pinterest
WhatsApp
Previous articleFinally, Bombay HC grants bail to Aryan Khan, 2 others, they will be let out tomorrow or day after
Next articleSupreme Court adjourns hearing of NGO’s plea challenging 2020 FCRA amendment, SBI rule