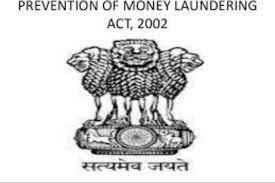 After the Supreme Court upheld the validity of provisions of the Prevention of Money Laundering Act (PMLA), the Mumbai Court ordered an immediate release of two people accused of money laundering accuse as it noted that the investigation into the predicate offence against them had been closed.

MG Deshpande,the Special Judge  said that after the Supreme Court judgement the PMLA court no longer had the jurisdiction to extend judicial custody and because the accused had been discharged in the predicate offences against them.

The Court thus ordered their release upon furnishing bail bond of ₹5 lakh each and condition of co-operating with the probe of the Enforcement Directorate (ED) investigating the case.

The accused named Babulal Verma and Kamalkishor Gupta, for cheating and criminal breach of trust under the Indian Penal Code.

The same year, the ED registered an Enforcement Case Information Report (ECIR) based on this FIR.

The accused stated he has filed a closure report before the concerned Magistrate and that the complainant has also given a no-objection.

In February 2021, the Magistrate took conginzance of the report and accepted closure of the investigation.

Following this, an application came to be filed before the Special Court seeking their release on bail, which the Court rejected and the same was later upheld by the Bombay High Court.

The appeal against the High Court order was pending before the Supreme Court.

The ED arrested the accused in January 2021 and later remanded to judicial custody which was extended from time to time.

The accused moved the present applications opposing the application of ED seeking extension of their judicial custody.

In the interim, the applicants sought for release from judicial custody.

ED counsel has sought time to respond to the plea asked for the judicial custody could be extended as per Section 309(2) of the Code of Criminal Procedure.

The Court, however, noted that no application came to be filed in the present case seeking extension of remand.

The Court has already granted time to Enforcement Directorate to oppose the application, however, to comply with the true spirit of guidelines of the top court, the Court decided to release the accused in the interim till next date of hearing.

After granting the interim relief, the Court posted the matter for hearing on a date as per the convenience of ED