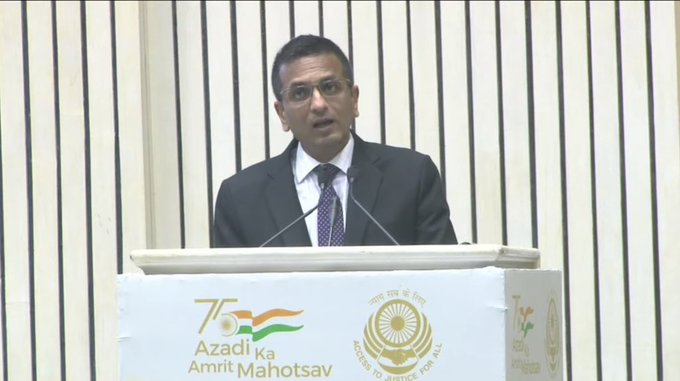 Justice Dhananjaya Y Chandrachud on Saturday said the right to free legal aid is equal to the basic right to equality, which referring to the six-week Pan India Awareness and Outreach Campaign organised by the National Legal Services Authority (NALSA) and launched by President Ram Nath Kovind.

Addressing the august gathering during the launch of six-week Pan India Awareness and Outreach Campaign from October 2 to November 14, Justice Chandrachud said, “We have come a long way since the legal service was embeded in Article 39A. With the SC intervention in Hussainara Khatoon, in 79 to the initiative by NALSA, which is significantly altered by Pandemic is an achievement. NALSA not only seeks to provide free legal aid to poor, but to workers in unorganised sector…Acid attack victims, others.

He said, “Last week, I was dealing with a case where charges in the case were not framed even after 12 years of incarceration of the accused. There is a lack of legal awareness, which is due to less resources, low income for legal service lawyers. Following the judgment in Indira Jaisingh, perhaps the Bar Council of India (BCI) can mandate the need of performing legal aide before reviewing the licence of an Advocate every five years. The provision of legal services aid can be enhanced, if lawyers only take up cases for the cause. Presently, the cases of NALSA are given to emplaned lawyers, who may not have the expertise.

“We don’t have a pattern of recruiting a young lawyers to chambers at all. That is why young lawyers are either going to cooperate sectors or not joining the legal profession. Young Lawyers have to take loan when they study and that doesn’t guarantee a promising future and good job in law chambers thereafter. I request the Bar to have some platform, where they engage young lawyers and from their we can engage them in legal aid. At least the SCBA can persuade as I believe we don’t have the democratise access at the moment.

“The ground reality of free legal service is far from reach. One of our mission is e committees to provide free seva kendra for legal service. The voluteers and lawyers are connected by a mobile app and to involve law students by forming a probono club. The use of AI including chat box is already in use. The different methods are used in different countries and soon to be here,” he added.

The event, which witnessed presence of Chief Justice of India and Patron-in-Chief of NALSA, Justice N.V. Ramana; Union Minister of Law and Justice Kiren Rijiju; Executive Chairman of NALSA Justice U.U. Lalit, Judges of Supreme Court and the High Courts and other esteemed dignitaries, aimed at spreading awareness among the people living in far-flung areas of the country, about the functioning of legal services and institutions, as well as to provide them Pro-Bono services.

Justice Uday Umesh Lalit said, “Legal service needs to be such way, that people should have confidence in it. The confidence when it comes to court based litigation, if good quality assistance of legal aid reaches each and every corner. When good established lawyers will take it as a cause and start doing pro bono, then perhaps we will have confidence in the eyes of people and have element of trust that they can trust the people of this country. We have medical College where internship is a matter of compulsion. But why not in law colleges. Acting as paralegal, perhaps there will be a regular stream of students helping in this cause. Our endeavour will be to leave the footprint in every village. So that legal help will reach to every person.

“Some system should be in place for the poor strata of the society. Another aspect of legal aid is that some kind of assessment should be made for the people stuck in legal system, according to time period. To assist those people, who among them require legal aid to solve their dispute. Meditation is a growing concept. We should analyse how many stages of scrutiny a case may go on. There is huge pendency in cases of agrarian dispute. It can be resolved through mediation process. We have to look at an holistic way to resolve the dispute. Legal awareness must grow…abhi to chalna hai Milo…Mujhe bi chalna hai Milo…”

Attorney General K.K. Venugopal chipped in, “We have 40 million cases pending in the lower courts.”

Senior Advocate and President of the Supreme Court Bar Association (SCBA) Vikas Singh said, “Our mythology teaches us that we have to serve our people. Pro Bono is certainly a ‘Daan’ from us and it should be from our heart and from our early ages. A sense of gratitude should come and then you can give back to the society. A pro bono work should be done with a sense and feeling of gratitude. By doing such work, you will learn the integrity of the profession, which will later help in your development.”

Bar Council of India Chairman Manan Kumar Mishra said, “A pro bono service is a great service to the humanity. The Bar Council of India introduce legal aid program back in 1998. Only 10-15 percent law schools are performing those activities. Pro Bono services will now be a connected to accreditation of law school, to encourage their students understand the value of such services.

Justice Ajay Manikrao Khanwilkar said, “The judiciary, as an institution, has acted upon itself to help those who are unable to receive legal services. Even during the pandemic, the legal service authorities did not stop their work. A study report of 2019 mentions that majority of people in India, eligible and in need to legal aid services, are sceptical about rendering these services. There are only five legal aid lawyers per one lakh population, which means one lawyer for 7736 persons out of 1.8 billion. It is essential to redress this dichotomy, both qualitatively and quantitatively. A humble beginning has started, the roads to be travelled are far and wide.”