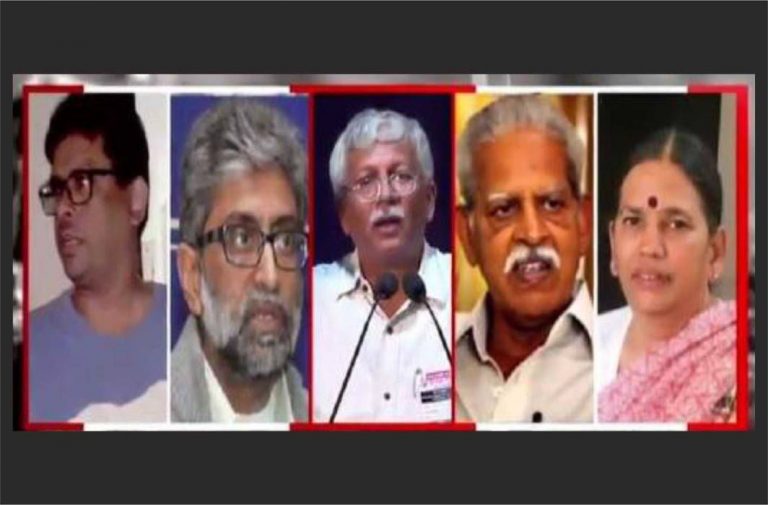 There was widespread condemnation of arrests of the five activists on Thursday, with politicians, civil libertarians and ordinary citizens lashing out at the government and many equated it with a throwback to the emergency. All accused the government of trying to divert public attention from its failures by targeting democratic activists.

“There cannot be a bigger conspiracy than calling those fighting against “fascist policies” conspirators, Leftist poet and writer Varavara Rao, among those arrested and now under house arrest in the alleged violence case, said on Thursday, lashing out at the Centre and Maharashtra police while talking to reporters.

The country had been hit with arrests from different parts of the country with the government alleging that renowned human rights activists were involved with the Maoists, especially with reference to an event in Bima Koregaon. Eminent lawyer and activist Sudha Bharadwaj had also been arrested and is now under house arrest. In total, five activists were arrested by the Pune police on the allegation that they were linked to Maoists who were planning terrorist activities and even make an attempt on the life of the Prime Minister and other senior political figures.

Congress president Rahul Gandhi said in a tweet: “There is only place for one NGO in India and it’s called the RSS. Shut down all other NGOs. Jail all activists and shoot those that complain. Welcome to the new India. #BhimaKoregaon”.

CPM General Secretary Sitaram Yechury was quoted as saying: “This is a brazen attack on democratic rights and liberties.” The BJP government, he said, is “desperately trying to protect the culprits of Koregaon-Bhima violence by harassing civil and human rights activists”. He said the arrests were meant to shield the real culprits involved in the violence. “Ever since the Bhima-Koregaon violence on December 31, the Maharashtra police, along with central agencies have been targeting Dalit rights activists and lawyers who are taking up the case.”

Historian Ramchandra Guha has hit out at the arrests, saying that this was a completely autocratic behaviour of the government and this need to be condemned. He called the actions “chilling.” He said: “As a biographer of Gandhi, I have no doubt that if the Mahatma was alive today, he would don his lawyer’s robes and defend Sudha Bharadwaj in court; that is assuming the Modi Sarkar hadn’t yet detained and arrested him too.”

Author Arundhati Roy said: “The simultaneous state-wide arrests are a dangerous sign of a government that fears it is losing its mandate and is falling into panic. That  lawyers, poets, writers, Dalit rights activists and intellectuals are being arrested on ludicrous charges while those who make up lynch mobs and threaten and murder people in broad daylight roam free, tells us very clearly where India is headed. Murderers are being honoured and protected.” Roy added: “Anybody who speaks up for justice or against Hindu majoritarianism is being made into a criminal. What is happening is absolutely perilous. In the run up to elections, this is an attempted coup against the Indian Constitution and all the freedoms that we cherish.”

Pune Police joint commissioner Shivaji Bhodke has been quoted as saying that they have been “arrested on terror charges”. He added: “Yesterday’s arrests were made after investigation from previous arrests made in June. The arrests and raids were conducted for Maoist activities. Bhima-Koregaon one of the outcomes of their activities.”

The day after the arrests, the Supreme Court on Wednesday ordered that the five activists arrested for their alleged role in Pune’s Bhima-Koregoan violence of December 2017 be kept under house arrest.

The order came during an urgent hearing on a request by historian Romila Thapar and others. A bench of Chief Justice Dipak Misra and Justices A M Khanwilkar and D Y Chandrachud issued notices to the Centre and the Maharashtra government, seeking their response by September 5. Giving the verdict, the SC cautioned the government that “dissent is the safety valve of democracy which will burst if people’s voice is throttled”.

All the five were arrested on Tuesday after several raids across the country under various provisions of the IPC as also under the Unlawful Activities Prevention Act (UAPA). They would now not be sent to jail or police custody. Appearing for Thapar, Senior Advocate Abhishek Manu Singhvi contended the government tried to stifle the activists, just because it did not agree to them.

Additional Solicitor General Tushar Mehta appearing for the State of Maharashtra said that the accused already approached the high court against the arrest. He questioned the maintainability of the petition.

Civil liberties activist Gautam Navlakha, who was among the arrested on Wednesday described the case as a “political ploy” of the government to target dissent. “”This vindictive and cowardly government… is bent upon shielding the real culprits of Bhima-Koregaon and thus divert attention from its own scams and failures which stretch from Kashmir to Kerala,” Navlakha said in a statement.