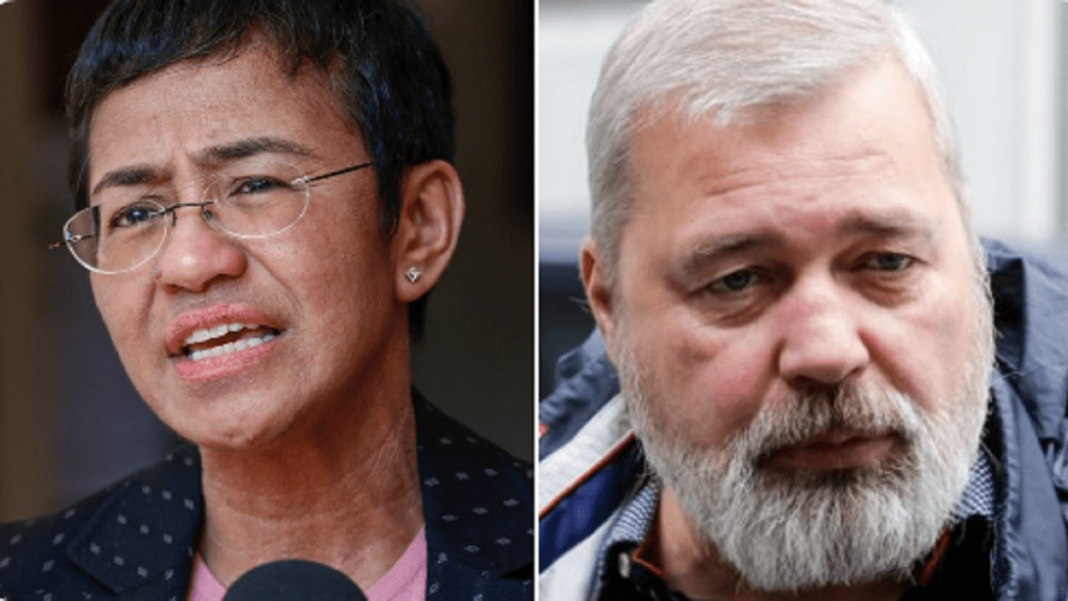 Journalists can do better than a Pulitzer, and the Norwegian Nobel Committee has proved it, may times over. This year, the committee awarded the Peace Prize to two journalists, one from the Philippines – Maria Ressa – and the other from Russia – Dmitry Muratov. With them, so far, eight journalists have won the Peace Prize (on seven occasions), and the fact that these two have won from within two very disturbed, authoritarian regimes, goes a long way in showing how much the media means to the world.

Maybe there is a lesson in that for biased and pathetically subservient Indian media houses, but that is another story.

Announcing the prizes the committee’s chairwoman Berit Reiss-Andersen told reporters: “Ms Ressa and Mr Muratov are receiving the Peace Prize for their courageous fight for freedom of expression in the Philippines and Russia. At the same time, they are representatives of all journalists who stand up for this ideal in a world in which democracy and freedom of the press face increasingly adverse conditions.”

Who are these people? Maria Angelita Ressa, 58, is a Filipino-American journalist and author, the co-founder and CEO of Rappler, an anti-establishment news site (and publication) that the extremely authoritarian regimes of the country have hated. After becoming the first independent Filipino Nobel laureate, Ressa did say that the authorities would not like it. But like it or hate it, Ressa is now too big to ignore. That she has also worked for long as a lead investigative reporter in Southeast Asia for CNN, has always been the flak jacket that has protected her from censure and torture.

Her main action was against the dictatorial moves of President Rodrigo Duterte, whose anti-drug campaign comprised actions that even the Taliban has not been able to emulate. There have been rampant killings, even of drug users, and the world has been up in arms. Journalists too have been targeted; it was extremely creditable for Ressa to have functioned in this atmosphere for so long. She has not escaped, though, having been convicted of cyber-libel by the Filipino government under the controversial Philippine Anti-Cybercrime law.

Ressa was also among Time magazine’s Person of the Year 2018 as one of a collection of journalists from around the world combating fake news.

When we see that it is actually the Indian media – the majority of them – that grows, nurtures and spreads fake news, we realise that the terms “freedom of the media” and “freedom of expression” are only memes in Indian social media, not much else. Also, trolling has existed since time immemorial – in different forms, even before social media and even before the internet – but when it percolates down to mainline news media outlets that croon about “facts”, you realise that the media is not more than a chronicle paper in India today.

Consider the case of the Russian Dmitry Andreyevich Muratov, the other winner of this year’s Peace Nobel. The man who will be 60 at the end of this month is a journalist, a television presenter and the editor-in-chief of the Russian newspaper Novaya Gazeta. Consider that he has been functioning within the repressive regime of Vladimir Putin, within which opposition leader Anatolievich Navalny could barely function, his demonstrations being run down, his Anti-Corruption Foundation being hounded. Consider that even a world renowned figure such as Navalny can only use his six million-plus YouTube subscribers and over two million Twitter followers to publish material about corruption in Russia and organizes political demonstrations.

Realise that Navalny was hospitalized in serious condition after being poisoned with a Novichok nerve agent in August 2020.

Those are Muratov’s and his pro-democracy newspaper Gazeta’s challenges. He did not flinch at publishing strong and critical articles by anti-Putin journalist Anna Stepanovna Politkovskaya, who was first poisoned, than assassinated on October 7, 2006 in the elevator of her block of flats.

THE ROLL OF HONOUR

These two aren’t the first to have earned this huge distinction.

The first Nobel for a journalist was given way back in 1902, when journalist Élie Ducommun of Switzerland was joint winner with academician Charles Albert Gobat. Ducommun won for “his untiring and skilful directorship of the Bern Peace Bureau” and Charles Albert Gobat “for his eminently practical administration of the Inter-Parliamentary Union”.

Five years after that, another journalist was awarded the Peace Nobel. He was Ernesto Teodoro Moneta of Italy. Described as a “militant pacifist”, Moneta was awarded the Nobel “for his work in the press and in peace meetings, both public and private, for an understanding between France and Italy.”

In 1911, the Nobel Peace Prize went to Austrian journalist Alfred Hermann Fried. He was awarded the prize “for his effort to expose and fight what he considers to be the main cause of war, namely, the anarchy in international relations.”

Fried was the founder of Die Friedens Warte (literally, a peace publication). As he moved to Germany, he also co-founded the German Peace Society, though the lion’s share of his time was taken up in publishing and other journalistic endeavours.

The Nobel Peace Prize of 1933 was awarded to Norman Angell, British journalist, author, and economist. He got the prize “for having exposed by his pen the illusion of war and presented a convincing plea for international cooperation and peace.”

Then came the Nobel Peace Prize 1935, received in 1936. It was awarded to Carl von Ossietzky of Germany. This, as some other Peace Prizes, created a great deal of heartburn and controversy. Ossietzky, a journalist, purportedly got the prize “for his burning love for freedom of thought and expression and his valuable contribution to the cause of peace.” Having got this news, Adolf Hitler reacted with fury, prohibiting all Germans from receiving the Nobel Prize. Ossietzky was seriously ill at the time and was refused permission to leave for Norway to accept the distinction. He died in a prison hospital in May 1938.

In 2011, the Nobel Peace Prize was given to journalist Tawakkol Karman of Yemen “for their non-violent struggle for the safety of women and for women’s rights to full participation in peace-building work.” The brave woman journalist co-founded the Women Journalists without Chains in 2005, a tool to fight freedom of expression and democratic rights. The organization produces reports on human rights abuses and attacks against the press in Yemen.

India, for all our chest-thumping, exists in the outback. The media moguls seem to have sold their souls and just a handful of independent minded people still manage to hold out, even as the caustic crudeness closes in.

Did you find apk for android? You can find new Free Android Games and apps.
Share
Facebook
Twitter
Pinterest
WhatsApp
Previous articleSupreme Court lets off man convicted for gang-rape of minor over lack of convincing evidence
Next articleCentre approves appointment of 8 Chief Justices, transfer of 5 Chief Justices to 13 High Courts across the country