In Anomalies in Law and Justice, Justice Raveendran has used simple terms to explain various deficiencies in the law which require to be overcome, so that the common man does not lose faith in the judiciary and the legal system. 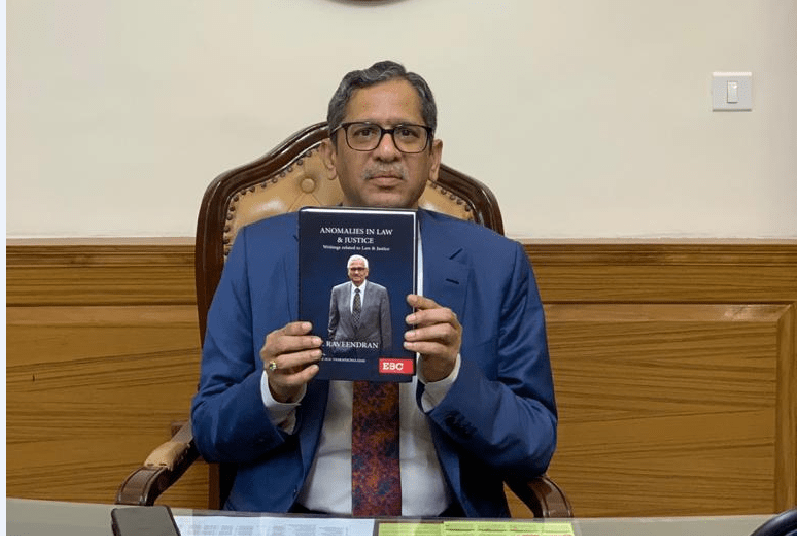 Chief Justice of India Justice NV Ramana on Saturday released former Supreme Court judge RV Raveendran’s book Anomalies in Law and Justice. The CJI spoke on the occasion which was followed by a panel discussion.

Talking about the book Anomalies in Law and Justice in the panel discussion, the CJI said the book is an attempt to explain to the layman that the law and the legal system is still evolving and that it requires more critical thinking to resolve issues which have persisted in the system for a long time. The book covers procedural as well as substantive law relating to civil  procedure, electoral reforms and the alternate dispute resolution mechanism.

Addressing the panellists, CJI Ramana said: “I deem it a matter of great privilege to be part of this book release  function for number of reasons. My association with Justice Raveendran relates back to several years and I am fortunate  enough to have such close acquaintance with him.

Today, I am running the risk of being called a biased judge by  none other than Justice Raveendran. This is what happens when  you speak frankly about a person who is your guide and  inspiration. He is humility personified. I was left with very little choice – when I agreed to be part of this event and speak about  both the book and its author.

Justice Raveendran’s judicial wisdom needs no introduction.  Particularly to this august gathering. He is an amalgam of  unwavering commitment to rule of law, strong believer in the  independence of judiciary, having a deep sense of morality and  scholarship par excellence. His tireless work towards reforming our judiciary has been critical in shaping our jurisprudence.

He came from a humble background, with no family pedigree in  the profession. Trained under S. G. Sundaraswamy, a doyen of  the Karnataka Bar. Justice Raveendran has the ability to relate  to people and issues around him. Justice Raveendran’s  judgments are of great value, not because they are replete with  western jurisprudence or are rich in legal jargon, but because  of their connect with today’s Indian context and its people.  Judgeship was never an office for him. He never tried, or made  an attempt, to project himself as the saviour of the judicial  process. He continued to be humble and believed that the office  which he held did not exist for himself. He discharged his duties  with distinction and commitment to the people.

He believed in  the dictum, as Lord Denning said, “that the best judge is one who is less known and  seen in the media”.  He exemplifies all that is great about our institution. Like many  of my colleagues, past and present, I have always been a great  admirer of his judgments which are of simple language,  intelligible and clear to the common man. Through his  judgments, he has set a standard of excellence which  demonstrates that law can be a force in society, to bring out the  best in the community and make it a better place to live.

Let me turn to the book now. The book titled “Anomalies in  Law and Justice” is an attempt to explain to the lay man that  the law and the legal system is still evolving and that it requires  more critical thinking to resolve issues which have persisted in  the system for a long time. Through this book, Justice Raveendran undertakes to explain in simple terms, various  deficiencies in the law which require to be overcome, so that  common man does not lose faith in the judiciary and the legal  system.

In the foreword, Justice Venkatachallaiah wrote that the book  pre-empt the need for any extraneous foreword, but his  admiration for Justice Raveendran compelled him not to deny  this opportunity to record his tribute to this eminent work.  These words speak volumes about the book as well as the  author. Before I opened the book, I thought I will read the entire  book at some other point of time, leisurely due to paucity of  time. But the moment I started reading the book, I couldn’t  resist myself from completing it. The narration is captivating.

The book is divided into two parts. The first part is addressed  to the common man, along with judges and lawyers. The second  part is specifically addressed to lawyers and judges. This second part is specialized in its outlook and addresses certain  complicated issues which have subsisted for decades. This book covers procedural as well as substantive law relating to civil procedure, electoral reforms and the alternate dispute resolution mechanism. The treatment given in this book is  scholarly, with a mix of both academic and practical knowledge.  It caters to both legal professionals as well as academicians.

The first chapter sets the tone for the entire book, wherein  Justice Raveendran identifies certain existing anomalies in the law. There is no doubt that Indian law is filled with old legislations enacted during the British rule, which have lost  their significance in the contemporary India. One such example  which he highlights, relates to the fines under IPC which have  not been amended since 1860. He concludes the chapter by  noting that there are many such examples which need to be  considered by both a vigilant Bar and the Bench.

One aspect which caught my attention is the part addressing  the ADR mechanism in India. Justice Raveendran has years of  experience in this field. He has the distinction of settling major  contentious arbitrations across India as well as in other  countries.

Recently, In the case of Vidya Drolia,1I had an occasion to deal  with an area of arbitration which has troubled the Indian Courts  since the enactment of the Arbitration Act of 1996. Initially, when the Courts started interpreting the 1996 enactment, it was seen as intervention by Courts at every step of the arbitral  process. Such an approach was detrimental not only to the  autonomy of the parties but was also a reason for increasing  judicial backlog. It was Justice Raveendran who, for the first  time, in the case of Booz Allen, recognized such excessive  intervention as being detrimental to an arbitration friendly  image for India. It is only after his judgment that the Supreme  Court and other High Courts followed the trend to interpret the  law in an arbitration-friendly manner. Ultimately, the noble  intentions laid down in Booz Allen were fully realised through  the recent amendment to the Arbitration Act and subsequent  judicial interpretation. If I may say so, Justice Raveendran played  a significant role through his judicial pronouncements in  helping India realise its true potential in the liberalized  economic environment.

In the final chapter, Justice Raveendran again navigates  through various issues affecting arbitration practice in India.  From the lack of professional vigor to delays, the book addresses  these concerns in great detail, which must be looked into by all  stake-holders so as to achieve the full potential of arbitration in  India. The author lastly concludes that an efficient arbitration  system in India will not only strengthen trade and commerce in  India but also increase the confidence of the international  community in India’s dispute resolution process.

The forethought of Justice Raveendran, to make India  Arbitration friendly, which was against the established  precedents at that time, is commendable. His efforts had the desired impact of enhanced ease of doing business in the  country and tremendously cutting down on litigation time. The  general distrust among the business community regarding litigation was adequately addressed through his various  judgments, which are a testament to Justice Raveendran’s judicial capabilities.

I have no hesitation in describing Justice Raveendran as one of  the legends who have increased the prestige of the Supreme  Court of India. Justice Raveendran increased the public faith in the Judiciary through his air-tight judgements. Even after  concluding his service as a Judge of the highest Court, he  continues to be passionate of serving the public cause. This one  volume, speaks volumes about his life-long efforts for working  towards public interest. For me, it is a great honour to be  considered worthy of releasing this beautiful book which  brilliantly radiates the wisdom of Justice Raveendran.

I congratulate Justice Raveendran for coming out with this book,  which is the need of the hour. I urge him to write more on diverse topics of his expertise and share his immense knowledge with  the world. Before I conclude, I wish to share a message that he sent at the time of my appointment as the Chief Justice of India.

‘Dear Justice Ramana,  Congrats, best wishes and blessings. These are difficult  days. Challenging days. Testing days. Being a Chief  Justice requires courage to act, commitment to the  cause of justice, concern for the common man, tact to  deal with and obtain the cooperation of the brother  judges in addition to the qualities expected of a judge.  You possess all of them in abundance. Let the almighty  lead you to a purposeful, meaningful and successful  tenure.’

I feel that this message is indeed the road map for my journey  as the Chief Justice of India. I shall treasure this message  forever.

I wish him good health and all the best for all his future  endeavors.