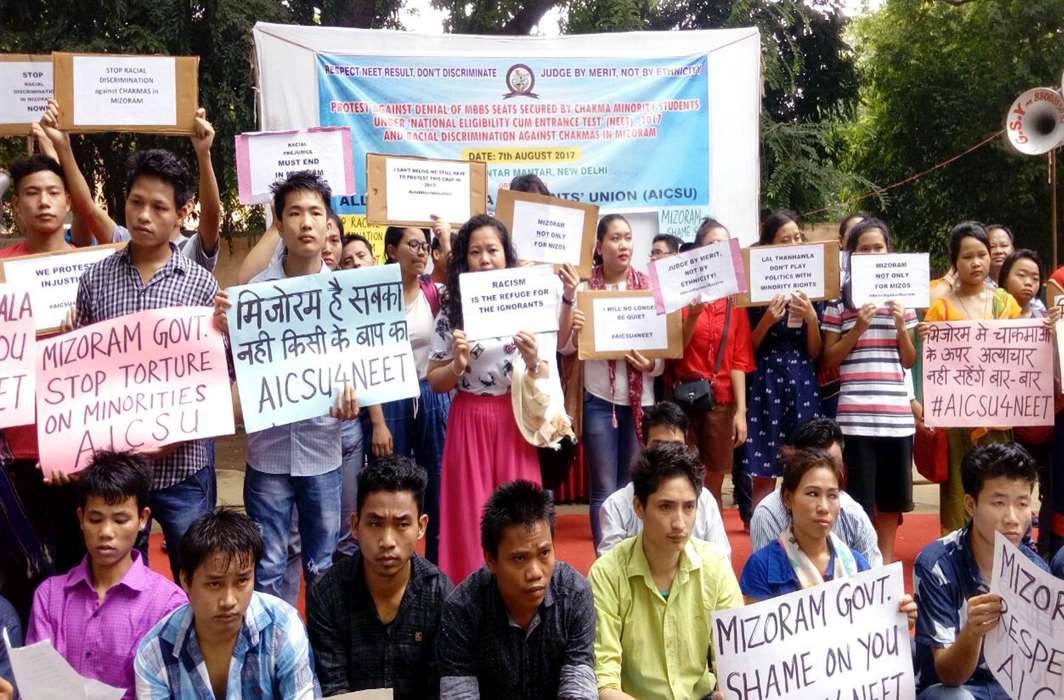 Above: All India Chakma Students’ Union staging a demonstration in New Delhi against oppression and racial discrimination of Chakma refugees. Photo: UNI

Waiting to find the Indian government’s final stand vis-à-vis the Rohingya Muslim refugees from Myanmar—and the Supreme Court’s final decision on that—one finds that an unresolved local issue from way back in the 1960s has presented a strange situation where India does not seem to want Buddhist refugees either.

This is about the Chakma and Hajong tribesmen and women who had crossed over to Arunachal Pradesh from Bangladesh (then East Pakistan) between 1964 and 1969. They had been displaced from the then East Pakistan where the Kapti dam was being built across the Karnaphuli river in the Chittagong hill tracts. They were not compensated and had no option but to flee the state. They are still stateless, despite a Supreme Court directive on that given way back on September 17, 2015.

A closely related case, through an SLP, came to the apex court, which on Tuesday (October 3) granted the time sought by Additional Solicitor General Tushar Mehta— appearing for the Election Commission of India (ECI)—for filing a reply before the court. The court has extended time till the first week of November.

The SLPs was filed by the All Arunachal Pradesh Students Union (AAPSU) against judgments passed by the Gauhati High Court’s Itanagar bench on the AAPSU writ petitions filed as PIL.

The main grievance raised in the PIL relates to the additional directive issued by the ECI in 2005 and 2007 for revision of electoral rolls in respect to areas where there are substantial numbers of Chakmas and Hajongs. This is an issue of granting citizenship to the tribals that the students’ body does not like. AAPSU maintains that the orders of the ECI are discriminatory and also contrary to the Constitutional and statutory provisions.

On that September day in 2015, the apex court had clearly voted for the Committee for appellants Citizenship Rights of Chakmas (CCRC) and had directed the Arunachal Pradesh government to treat all Chakmas who settled in the state between 1964 and 1969 as Indian citizens. The order had come eight years after the petition was filed. The court had also directed Itanagar to enroll 4,677 citizenship-seeking Chakmas in the electoral list within three months.

Yet the issue of their citizenship has remained unresolved. The issue goes back to before the Supreme Court directive, in 2003, when the ECI, after conducting inquiries, had decided that these tribal people should get citizenship.

The ECI had ordered a Special Summary Revision of Electoral Rolls in the state, with January 1, 2003 as the qualifying date, taking note of the 1991-formed CCRC appeal. The organization had complained that the Chakmas, who were eligible to be Indian citizens were not included in the Electoral Rolls of 14-Doimukh (ST), 46-Chowkham (ST), 49-Bordumsa-Diyum and 50-Miao (ST) assembly constituencies. The ECI inquiry verified that Chakmas, who had been settled in various areas in Arunachal Pradesh had not been included in the Electoral Rolls.

However, virtually vetoing the ECI, the state government’s cabinet had arbitrarily resolved that citizenship should be restricted to only those tribal people whose Inner Line Permits were valid for at least another six months. That promptly cut out from the possible electoral list 1,497 claimants.

The ECI took exception to the state cabinet’s decision of rejecting many claims and said the government was interfering with its (the ECI’s) statutory and constitutional powers in the matter relating to preparation of electoral rolls, by imposing conditions on the eligibility of persons for inclusion of names in the electoral rolls. This role, says the ECI, is its exclusive domain and not the government’s.

Things got worse, when despite the ECI directing Electoral Registration Officers (ERO) to review their decisions. However, despite this directive the EROs refused to do so. The EROs had earlier accepted for inclusion, but subsequently rejected because of the cabinet decision.

As a result, the ECI, vide its order dated January 2, 2004, suspended election works including the preparation and revision of electoral rolls in those four assembly constituencies till such time the state cabinet withdrew its resolution dated of May 14, 2003 or amended the same appropriately.

What was working for the ECI was the joint statement issued by the Prime Ministers of India and Bangladesh in February 1972, which said that the Union Government had decided to confer citizenship on the Chakmas under Section 5(1)(a) of the Citizenship Act, 1955.

Even then, the state of Arunachal Pradesh had reservations. The Central government was in favour of dialogue between the state government, the Chakmas and all concerned to resolve the issue of granting citizenship while also/or redressing the genuine grievances of citizens of the state.

The 2015 Supreme Court directive had evinced negative reactions in the state where refugees are not welcome. Locals—and AAPSU is a prominent representative of this view—fear that the “ethnic balance” would be disturbed by refugees. AAPSU had held a protest rally against this.

Meanwhile, Union Minister of State for Home Kiren Rijiju, a native of Arunachal Pradesh, had then added fuel to the fire by saying that the court order will “dilute the constitutional safeguards of the state’s people.”

It has to be seen what position the apex court takes now on this old issue and what repercussions this may have on the Rohingyas.