On Legal Services Day, CJI NV Ramana reminds young lawyers to remain alert of social realities and be aware of their role in responding to it 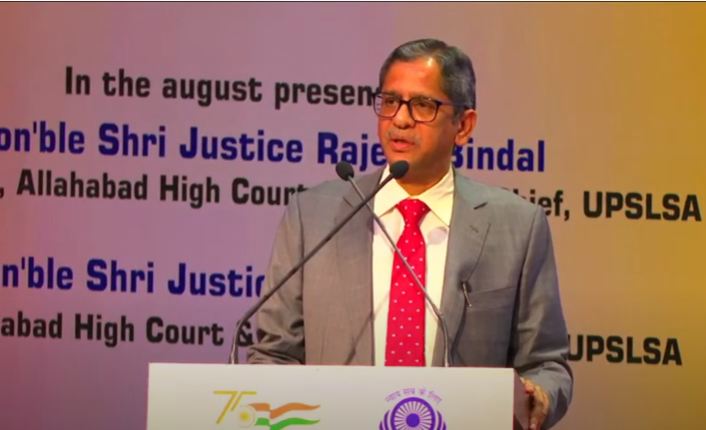 Chief Justice of India N.V. Ramana on Tuesday told young lawyers that it was their duty to remain alert of social realities around them and be mindful about their role in responding to the same.

Speaking on a range of legal issues at the observance of the Legal Services Day at an event in Greater Noida’s Sharda University, CJI Ramana said students here are doubly privileged firstly to be educated in premier institutes, where information is available at their fingertips and secondly, being educated in law to be the voices of those, who have none.

During his speech, Justice Ramana, who is also the Patron-in-Chief of the National Legal Services Authority (NALSA), quoted Swami Vivekananda: “Don’t look back, look forward. “Infinite enthusiasm, infinite daring, infinite patience; then only alone can great deeds be achieved,” the CJI said, again quoting the Swami.

Justice Ramana said it is immensely beneficial for law students that through legal services authorities, they are coming face to face with the grass-root realities of the country. “What I find more beneficial is that these students are becoming major players in the legal aid movement. They are essential for expanding the outreach of legal services to every corner of the country,” he said.

Earlier, the idea of legal aid was to confined to courtrooms but over the course of 26 years, the legal services authorities have broken the traditional notions of legal aid and have given an expanded meaning to access to justice, CJI Ramana said.

“The decision to join the legal aid movement will pave the path for a great career. This will help you inculcate empathy, understanding and a sense of selflessness. Remember, unlike other professions, the legal profession is not about profit maximization, but about service to society,” he said.

Today, the role of legal services authorities is not constrained merely to the provision of court-based legal representation. They also work towards legal awareness, legal literacy, social action litigation, settlement of disputes through Alternate Dispute Resolution Mechanisms, among others, he said.

Recalling the importance of the occasion, Justice Ramana said November 9 is celebrated every year as Legal Services Day. It was first started by the Supreme Court in 1995 to provide help and support to the poor and weaker sections of society and a commitment to justice for all.

Speaking of Union Minister Kiren Rijiju and his contribution to the justice delivery system, Justice Ramana said, “In a general sense, we call fellow judges brothers. He is another brother Justice Rijiju. I want to use Justice Rijiju. I don’t understand the secret of Rijiju’s youth. He is more young and dynamic. He has taken all the interest in resolving so many problems. I thank Rijiju ji for recognizing the hard work and the service of the judiciary and judges and I can see that in recent times you are the only law minister or a politician who recognized our judicial hard work and appreciated us.”

In his speech, Law Minister Rijiju said he had no doubt that the legal aid awareness campaign on from Gandhi Jayanti would reach every nook and corner of the country after its launch by President Ram Nath Kovind, CJI Ramana and Justice Lalit. He commended Justice Ramana for devoting his busy time to ensure legal services get due attention.

“We want to ensure that people do not have to struggle to get the bare minimum justice,” he said.

“I was very happy to see Lok Adalat being conducted and in front of us many cases are disposed of.  Some people from villages will be scared to go to court. They don’t know how a court looks like, you tell an ordinary person to go to High Courts or Supreme Court, they will say “mujhe rehne dijiye, mujhe court nahi jana hai”,” Rijiju said. Dwelling on the pendency of cases, the Minister said more than 4 crore cases are pending in lower courts and that the government is taking steps to ensure proper infrastructure for the subordinate judiciary.

“It is not easy for an ordinary person to get justice. A person may sell off his property but not get a date,” the Minister said speaking of the hardships the poor face.

Rijiju recalled that four years ago Prime Minister Narendra Modi had committed that India must be made an international centre for arbitration. In the same manner, we will make India an attractive destination for mediation also, he said.

Supreme Court judge Justice U.U. Lalit, the Executive Chairman of NALSA, emphasized the importance of expression through art. He spoke of his experience of visiting a painting exhibition curated by the child sexual abuse victims, where he was surprised by the expression of such positivity and praised art as an important form of expression.

Justice Lalit enumerated different modalities such as direct contact, audiovisual method, pamphlets, prabhat pheris to reach each and every Indian, making them aware of their constitutional rights to free legal aid.

Justice Lalit revealed a very intriguing statistic, out of 100 criminal cases listed before the courts, legal aid is provided in only 1% of the cases. He attributed this statistic to a lack of awareness about various mechanisms of legal aid. Highlighting the need for eradicating the darkness of ignorance with the light of awareness, Justice Lalit recited a part of a Sanskrit prayer, from the Brihadaranyaka Upanishad: “Asato Ma Sad Gamaya, Tamaso Ma Jyotir Gamaya, Mrityor Ma Amritam Gamaya.”

Allahabad High Court Chief Justice Rajesh Bindal, also the Patron-in-Chief of the UP State Legal Services Authority (UPSLSA), said the launch of the 6-week nationwide pan-India outreach campaign is one of the examples of CJI Ramana and Justice Lalit’s dedication towards providing free legal aid.

Congratulating the winner and participants of the first moot competition organized by Symbiosis alongside NALSA, Justice Bindal said they are the torchbearers of the future.

Allahabad High Court Justice M.N. Bhandari, the Executive Chairman of the UPSLSA, was also present among the dignitaries.