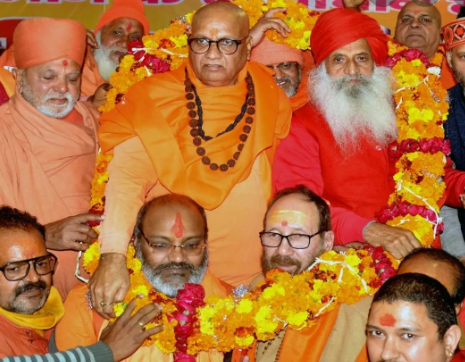 As many as seventy-six lawyers, including a retired High Court judge, have written to the Chief Justice of India Justice N.V. Ramana demanding suo motu action against those who allegedly gave hate speeches against Muslims in Haridwar and in Delhi in the events between December 17 to 19.

Commenting on the speeches made at the events, the letter says that it poses a grave threat not just to the unity and integrity of the country, but also endangers the lives of millions of Muslim citizens. The advocates said in the letter that speeches are provocative of Muslim genocide and urged for an urgent judicial intervention to prevent such events.

The two separate events organised in Delhi (by the Hindu Yuva Vahini) and Haridwar (by Yati Narsinghanand) on December 17, 19 wherein speeches consisting of alleged open calls for genocide were made.

The letter urged CJI Ramana to take suo motu cognisance of the events and requested for issuance of directions for taking action against the guilty persons under Sections 120B, 121A, 124A, 153A, 153B, 295A and 298 of the Indian Penal Code.

At the three-day Dharam Sansad held in Haridwar, provocative speeches were reportedly made by the participants including Yati Narsinghanand. Reportes said, he said: “Arming the Hindu brigade with bigger and better weapons would be the solution against the threat of Muslims.”

The Uttarakhand Police have booked Jitendra Narayan Tyagi, earlier known as Waseem Rizvi, and others for their alleged hate speeches at the Haridwar meet under IPC section 153A, promoting enmity between different groups on grounds of religion, race, place of birth, residence, language.

Sharing the letter on Twitter, Trinamool Congress MP Mahua Moitra urged the Supreme Court to pay heed to the letter and requested it to take suo motu cognisance of the hate speech.