Home Top News of the Day news Palestine to ask India to replace US as sole mediator in negotiations with Israel, says official 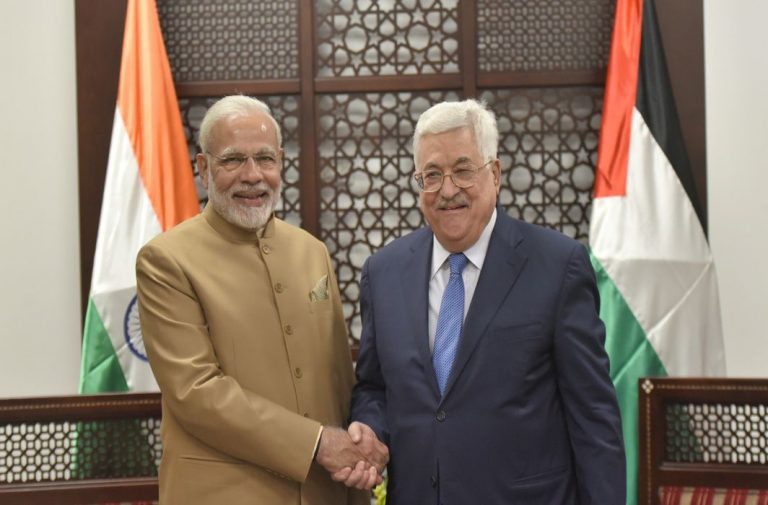 Of the decades of bonhomie between India and the Palestinians, including with the chief of the Palestinian Liberation Organisation Yasser Arafat, and despite India being one of the first nations to recognise the Palestinian area as an autonomous region, virtually a nation, no Indian Prime Minister has even set foot on that soil; neither on the West Bank, nor on the Gaza Strip. Till Saturday (February 10), when Prime Minister Narendra Modi reached Ramallah in the West Bank and held bilateral talks with President Mahmoud Abbas.

India’s idea is to reaffirm India’s support for the Palestinian people, and that is important in the backdrop of the massive Indian relationship
build-up with Israel soon after the BJP dispensation took over the country.

What Palestine expects from India

The influential Arab News daily has quoted a senior official saying that President Abbas will ask Modi to support a multi-country sponsorship that would replace the United States as the sole mediator in future Israeli-Palestinian negotiations.

The daily quoted Palestinian official Nabil Shaath as saying that Modi is to hold talks with Abbas and sign cooperation agreements worth about $50 million.

Abbas has sought European and Arab support for replacing the US as the sole Mideast mediator.

Indian diplomats have been continuing backchannel talks with the Palestinians and each time Modi meets Israeli Prime minister Benjamin Netanyahu, a corresponding talk session with Abbas is organised. Before the recent visit of Netanyahu to India, a visit of Abbas to India was quickly finalised and gone through. The diplomatic balance has been kept, somewhat, though the earlier close friendship with the Palestinians may have eased.

When Modi first visited Israel last year, he did not go to Ramallah. That had created a diplomatic storm and a huge belief that India was abandoning its long-time friend and turning its back on its people. Indian diplomats have almost set this right thereafter Abbas’ recent comment that India can play a major role in the complicated politics of West Asia would certainly precent relations from
de-hinging.

One has to remember that this trip of Modi comes within the confusion that US President Donald Trump has created by unilaterally declaring that it would be shifting its Israeli embassy to Jerusalem, acknowledging the disputed city as Israel’s capital.

India has so far refrained from commenting on this development, and how Modi will be dealing with this if asked a direct question is to be seen.

The basic idea of an Indian trip here – it is the first leg of a three-nation trip, the other countries being the UAE (Riyadh) and Oman (Muscat) – is to stress on India’s de-hyphenating of relationship with Israel and Palestine. India does not want to be burdened with old baggage and wants to start a new process in the region.

The 82-year-old President of Palestine is a respected politician and he has said recently: “We will discuss the recent updates with Prime Minister Modi, and the recent developments in the peace process, the bilateral relations, and the regional situations, and the possible role India can play in enhancing peace in the region, as well as discussing different economical aspects beyond the existing ties we already possess.”

That is easier said than done, because India’s sudden involvement in the area could lead to a deterioration of relations with Israel, especially with several technical (including defence) tie-ups having already been signed. It has also to be understood that India’s position, vis-a-vis the region has undergone a sea change. Palestine is waiting for huge investments in real-estate development, in water resources and energy development, apart from small industries that can provide employment within the regions without their youth having to travel into the walled area of Israel to earn a living.

On his trip Modi will lay a wreath at the Mausoleum of Arafat. During this he will be accompanied by his Palestinian counterpart Rami Hamdallah.

He will also visit the Arafat Museum before being received in a ceremony by President Abbas.

The travel to Ramallah for Modi was not direct. His plane landed in Amman, Jordan, from where he took a helicopter to Ramallah. He will return by the same route before leaving for Riyadh. However, he will not be moving into Jordan on this trip.