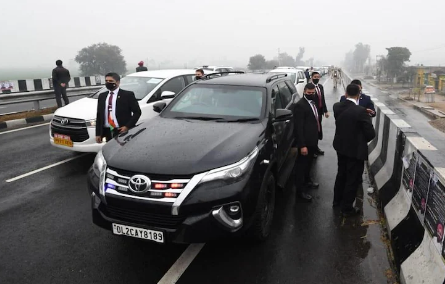 The Supreme Court on Monday directed the constitution of an independent inquiry committee headed by a retired Supreme Court judge to investigate the security breach that occurred during Prime Minister Narendra Modi’s visit to Punjab on January 5. The Supreme Court will release the names of the chairman and other officers in a detailed order.

The bench of Chief Justice of India Justice N.V. Ramana, Justice Surya Kant and Justice Hima Kohli asked the Government of Punjab as well as the Central Government to put the inquiries on hold which were being carried out by the committees formed by them. The PIL, filed by NGO Lawyers Voice, sought action against officials responsible for the security breach.

Today, during the hearing of the case in the Supreme Court, the Chief Justice India said that they have received the documents related to security at 10 am today.

Punjab government counsel Senior Advocate D.S. Patwalia submitted that the Central Government has issued show-cause notices to seven of their officers. Along with this, 24 officers and employees are being questioned, whereas the Supreme Court has already stayed this.

Patwalia said that they are being threatened as to why action should not be taken against them. He said that if Punjab officers are found guilty in this matter, then action should be taken, but not without investigation. “We are also serious about the lapse in the security of the Prime Minister,” he said.

Solicitor General Tushar Mehta, appearing on behalf of the Centre, told the Supreme Court of the various provisions of law giving details of the SPG functioning, in which it was told that the SPG and the security of the Prime Minister is maintained in coordination with the State Police chief, the Director General of Police.

Along with this, the SG also gave security related information in the Blue Book of SPG Act and SPG Security regarding the security of the Prime Minister. He told the court that it consists of inputs from several departments including the Director of Intelligence and the CID, especially when the Prime Minister is involved in programmes organized in public places or in the open.

The SG told the Court that the IGP of Intelligence/Security would be responsible for the lapse in intelligence. He said that there is no doubt that there has been a glitch in following the process of security of the Prime Minister. It is clearly written in the Blue Book that the security arrangements are made by the local police under the supervision of the DGP.

SG Mehta said that there can be no dispute on the fact that there was lapse and negligence in security. He said that before the Prime Minister’s car reached the flyover, there was no information that a large number of people were present on the flyover. The crowd had started gathering since morning. This information should have been given to the DGP. Still no input was received from their side while it was a scheduled trip. He said the Prime Minister was scheduled to travel by air on January 5. All the agencies in the state were told that there could be a weather problem and the prime minister would travel by road as well. It also had rehearsals.

Justice Hima Kohli asked the SG that if the Centre has decided everything on this matter then why is this matter before us?

To which, the SG said that this matter has come due to the filing of the petition in the court.

Justice Suryakant also asked the SG that the petitioner and the Punjab government want a fair investigation? Why are you trying to get in the way of this?

In response, the SG said that whatever action was taken in this matter in the form of notice has been sent as per the rules.

After this, CJI Ramana said that we have taken the matter of Prime Minister’s security seriously.

CJI asked SG if you want to take disciplinary action, then will there be any justification for forming an inquiry committee on behalf of the court? What will the committee do then?

The SG submitted to the CJI that the court should review the report of our committee.

On this, the CJI said, then let the committee of Punjab government also do its work. The SG objected to this and said that there are problems in the Punjab Committee.

Further, Justice Hima Kohli told the Central government that its arguments show that it has already decided everything, then why have you come here in this court?

Justice Kohli asked that when on Friday we had asked to stop the action, on what basis did you send the notice to the officers?

Responding to Justice Kohli, the SG said that the notice had already been sent before the hearing.

The CJI, while expressing dissatisfaction over the action taken by the Centre, said that when you have initiated disciplinary and penal action, what order are you seeking from us now?

Justice Surya Kant said on the notice issued by the Centre’s committee to inquire into the lapses that it is contradictory in itself. Because we have asked both the Centre and the states not to take any action.

He further said that on one hand you are sending notices and on the other side here you are also calling them guilty. “What is the way of all this? Maybe after investigation your things may be correct but how can you say all this right now?”

The Supreme Court directed to constitution of a committee which is to include the DGP of Chandigarh, the Registrar General of the Punjab and Haryana High Court, officers of the NIA and a senior police officer of the Punjab government.