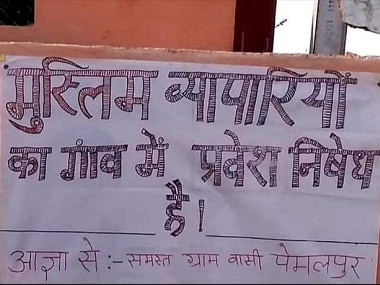 Police in village in Indore district defused a potential tinderbox when they removed a poster that forbid the entry of Muslims traders in the village.

The purported poster, was reportedly signed on behalf of residents of Pemalpur village in Depalpur tehsil located 65 kms away from Indore district headquarter, and displayed a message that traders from a community were banned from entering the village as per the order of villager.

Police said they launched investigation following unconfirmed messages on social media that such poster had been put up , and the poster was removed as soon as the police learnt about it, and a case was registered.

Former CM Madhya Pradesh and Ex General Secretary of All India Congress Committee Digvijay Singh, also condemned the act through his tweets stating that this type of division-scattering in the society is not in the interest of the country. He questioned  Chief Minister Shivraj Chauhan and MP Police, and asked if this act was not against the appeal of Prime Minister Modi ji, and if it’s  not a criminal offense under our law. Later, he also thanked police through a tweet. “Thanks to MP police for taking immediate action. Whipping up communal frenzy won’t help the fight against coronavirus. The virus does not have religion.”

This incident comes after two persons in Karnataka were booked for banning entry of Muslims in a village in the State.

Two persons from Ankanahalli of neighbouring Ramanagaram district had asked the villagers to prevent the entry of Muslims following the outbreak of COVID-19, where reportedly a gram panchayat member had hired an elderly man to alert the villagers against allowing Muslims to enter the village.

A video was recorded and shared on social media where a man while beating a drumhad also allegedly asked the villagers not to employ any Muslims, following which a case was registered by the local police.