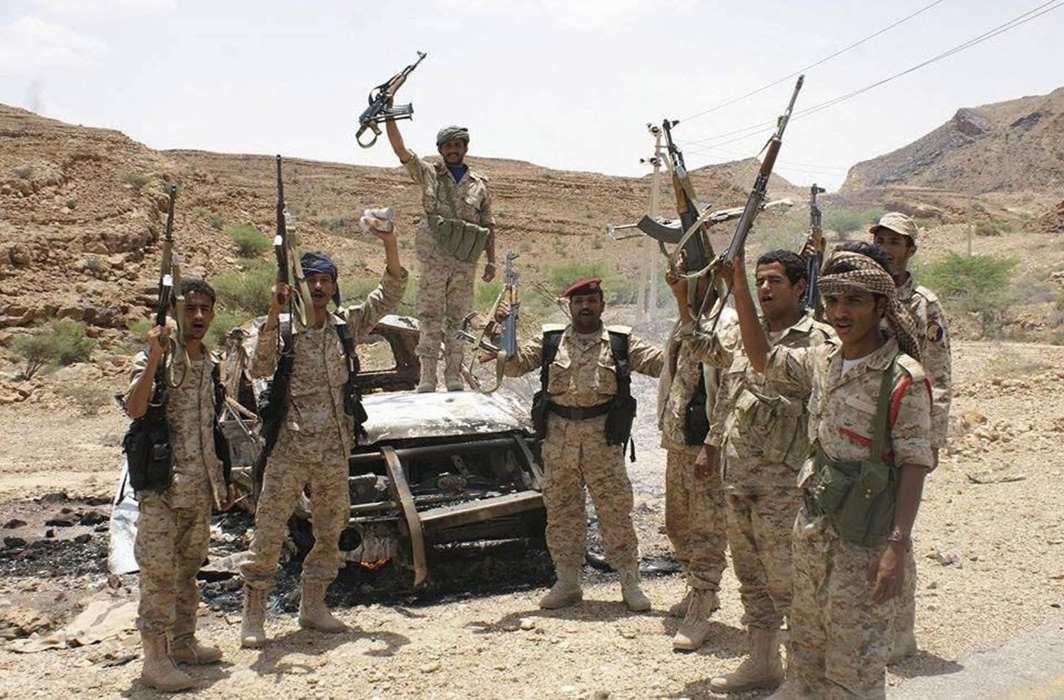 Above:  Army soldiers wave their weapons next to a car belonging to al Qaeda militants, destroyed during fighting, in the southeastern Yemeni province of Abyan in this handout photo provided by Yemen’s defence ministry on May 6, 2014/Photo: UNI

Moving away from its earlier stated policy of not deploying armed forces or to get involved in Saudi Arabia’s conflict with Yemen, Pakistan has now decided to add more forces to its already existing 1,000 troops in Saudi Arabia, involved in various advisory and training roles, say reports quoting officials.

When the conflict broke out in West Asia and Saudi troops got involved, the kingdom had sent a strongly worded letter to the then Nawaz Sharif-led government of Pakistan, saying send troops or face action. Pakistan is heavily indebted to Saudi Arabia, with several of its basic needs being met with funds from the kingdom apart from a huge number of its nationals in work in the kingdom, sending back foreign exchange). Now, with even the US saying that it will not give any more defence-related finds to Pakistan, the country is facing a severe cash crunch. The Saudi order now must be used.

During Sharif’s rule, the proposition was placed before the Pakistani parliament and the proposal was defeated there. Hence Pakistan made it clear to the kingdom that it would not be possible to send troops who could get embroiled in the conflict. Saudi Arabia had not been happy about this.

This policy shift will be under a bilateral security cooperation treaty with the kingdom.

On Friday (February 16), at the army headquarters in Rawalpindi, a meeting was held between Army Chief General Qamar Javed Bajwa and Saudi ambassador to Pakistan Nawaf Saeed Al-Maliki, reports have said. The Pakistani army’s announcement came immediately after that, indicating that the Saudis had put pressure on the Pakistani’s to honour the treaty.

According to reports, the announcement said: “In continuation of ongoing Pak-Saudi bilateral security cooperation, a Pakistan Army contingent is being sent to Kingdom of Saudi Arabia (KSA) on training and advise (sic) mission. These or troops already there will not be employed outside KSA…” The army, it said, “maintains bilateral security cooperation with many other Gulf/regional countries”.

The last part is, of course, a defensive statement that makes no sense in the present context.

The meeting with the Saudi ambassador was also talked about, with the army saying that they discussed matters of mutual interest including regional security situation.

How many troops are being sent? Leading Pakistani daily Dawn, quoting “multiple sources”, said that it might be the size of a composite brigade. Army spokesman Maj Gen Asif Ghafoor, however, told the daily that the number would be lesser than a division.

Pakistan is facing a convoluted situation. While the entire conflict sees four major participants – Saudi Arabia, Russia, the US and Iran – Pakistan’s involvement in the conflict would not only mean involving itself in another regional conflict it cannot afford, but also would align itself against Iran, on who it has to rely to counter India, as well as to keep the trouble-torn Balochistan area under control. These are more serious regional – and close to home – concerns for Pakistan. For Pakistan, Yemen and Syria are faraway places where it can ill afford to go.

Meanwhile Yemen has sort of upped the ante against the Saudis – who have recently made huge arms purchases from the US – with the rebels regularly firing missiles towards the kingdom.

Saudi Arabia had set up an alliance of Muslim nations and its forces were being led by former Pakistan Army chief Raheel Sharif. That has yet to involve itself in the conflict and this recent addition of Pakistani troops could be through an indirect pressure exerted by Raheel Sharif. This has not been confirmed.

That this was developing was clear from Bajwa’s visit to the kingdom earlier this year where he had met officials including Crown Prince Mohammed bin Salman and Commander of Ground Forces Lt Gen Prince Fahd bin Turki bin Abdulaziz during his three-day stay.

As of now Pakistan says that its new batch of forces would be there in an advisory capacity. However, considering the amateurish nature of Saudi forces and its commanders, it is just a matter of time before Pakistani troops go all out into the battlefield. That will open a front far away from home for Pakistan. If the US experience of Pakistan is anything to go by, that involvement will not only result in body bags returning to Pakistan, but also will not add any credibility to an already discredited Pakistani army.

And considering the corrupt nature of the Pakistani army, its generals will benefit hugely (financially) from this deal. The country will remain as impoverished as it has always been.