Sabarimala: Supreme Court to decide on February 10 whether reference can be made at review stage 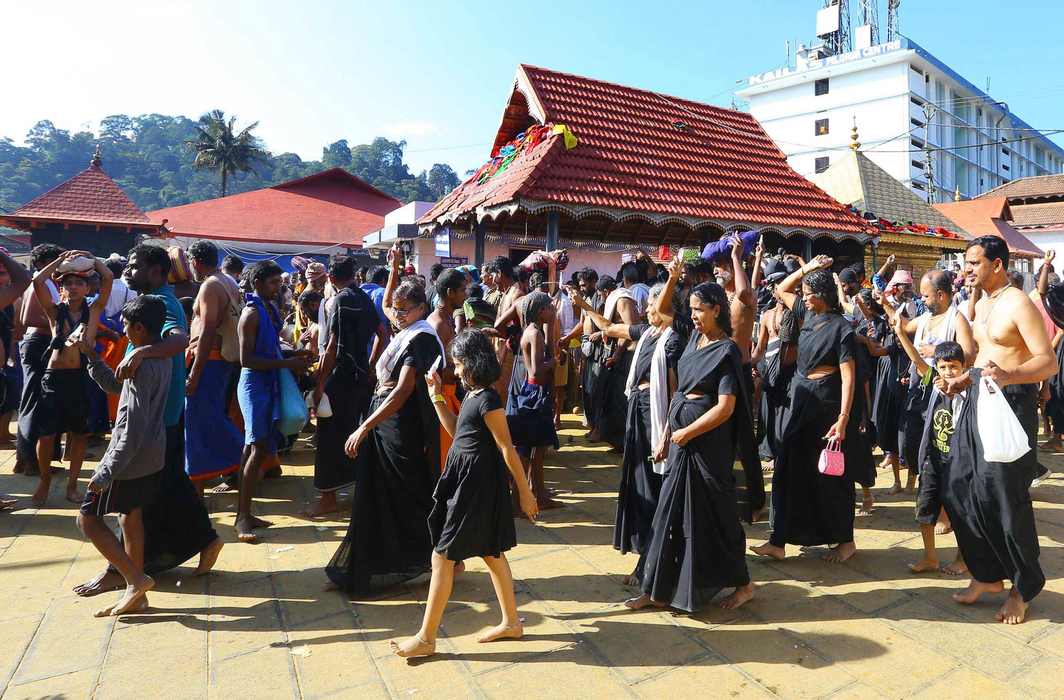 A nine-judge Constitution bench headed by Chief Justice of India SA Bobde on Thursday has commenced hearing the arguments on the issue “Whether the court can refer questions of law to a larger bench in a review petition?”

This follows the order of the nine-judge bench of the Supreme Court on Monday, which said that court will frame issues on discrimination against women at various religious places in view of the Sabarimala temple case and commence hearing of arguments next week.

4:00 pm: The 9-judge bench reserved orders on the preliminary issue of the possibility of reference at the stage of review. Order to be pronounced on February 10.

2:55pm- Singhvi begins his arguments on maintability of the reference order. There is no express bar pointed by the other party to the bench relating to the power of reference. The burden of proof is on the other party.

2:45pm- Divan further says that the issue relating to Female Genital Mutilation, entry of Parsi women and muslim women to place of worship was not before the bench while the reference order was made.

2:32pm- Shyam Devan reads order 47, Rule 1 of Supreme Court Rules, “no application for review will be entertained unless on the grounds mentioned.” He also reads the conditions to Article 145(3) of the constitution.

2:30pm- Senior counsel Shyam Devan starts his submissions. He makes a reference to K.C Kaka case and submits that the case has to be reopened by allowing the review and then a reference can be made.

2:25pm- Sr Adv Jaideep Gupta concludes his argument saying that a review must not be kept pending until the decision of reference.

2:20pm- Hearing resumes, Sr Adv Jaideep Gupta says, it was not within the purview of the review petition to refer the matter. Bobde asks,”Aren’t the Judges entitled to correct an error of law?”

12:57pm- Jaideep Gupta says that a reference cannot be made in a review petition because the nature of review and reference is different and in conflict with each other.

12:55pm- Senior Advocate Rakesh Dwivedi submits that the order of reference does not keep the review pending. He makes a reference to 2004 12(SCC) 713 to point out that Inherent powers cannot be used to expand the scope of review.

12:50pm- There is nobody who said that the order was wrong. There was no error in the Sabrimala judgement and hence the question of review cannot be decided as something that is wrong, says Rajeev Dhavan.

12:48pm- Dhavan continues speaking says Sabarimala is a decided case and is binding on everyone and hence it is a good law and there cannot be an intra court appeal in the matter.

12:45pm- As senior advocate Rajeev Dhavan begins his submissions, Senior Advocate K Parasaran says that he is an intervenor and hence he cannot make submissions on whether the matter should be heard or not.

12:40pm- Jaising says it is for the simple reason that there is a procedure prescribed. Such an exercise is not permissible and I agree with Mr Nariman. Such a reference is without jurisdiction. Jaising concludes by saying that if it is allowed then there is a danger that every review petitioner will say that the matter be referred to larger bench.

12:35pm- CJI refutes her and says why would the court decide at all.

12:30pm- Jaising says that the reference bench should have decided whether the writ petitions were maintainable or not.

12:25pm- Jaising says her submission is that there is no clarity as to whether the order of the court dated 14.11.2019 was passed in review petitions or writ petitions or both…

She further adds, “The scope of a review petition and that of a writ petition are different. The review petition have been simply adjourned without either allowing or dismissing it and the order of the bench is hence erroneous.”

12:20pm- Jaising says, “My first question is under which jurisdiction has the order of reference been passed,” in reference to the judgement rendered by 5 judges in the Sabarimala case.

12:15pm- Senior advocate Indira Jaising seeks permission to speak for a while stating that she supports both Solicitor General Tushar Mehta and Mr Fali S Nariman’s argument and she will state it in her arguments why she claims so.

12:00pm- Nariman refers to cases with respect to review and points out that the power of review is not an inherent power of the court.

11:55am- Bobde says that Nariman is stressing upon the argument that if review petition does not come with the question of reference then the court cannot refer the matter itself. Nariman replies saying that court only moves ahead when a case come before it, it doesn’t move on its own.

11:50am- The President of India only has the power to refer a question of national importance before the Court and none other has such power not even the CJI, says Nariman.

11:45am- Fali S Nariman says that a review petition is usually for correction and the Court cannot exercise its inherent power to unsettle a question which has already been settled.

11:35am- CJI questions Mr Nariman that if a a review has been filed against a judgement will the appeal be considered as reopened. Mr Nariman says that it can be done if the court allows it.

11:30am- Senior Advocate Fali S Nariman, further submits that the Shirur Mutt case was decided by a full court judgment where the interpretation was with respect to article 25. That time strength of Supreme Court was 8.

11:26am- Fali S Nariman refers to the Section 145(3) of the Constitution of India which says maximum number of Judges is five incase of a Constitution Bench.

11:20am- CJI says that the bench would first hear Fali Nariman’s objections and then the bench will hear the reply.

11:20am- Senior Counsel Abhishek Manu Singhvi says that he supports the reference order.

11:15am- No technical fetters prevents your lordship to do complete justice, says the Solicitor General. He concludes by referring to Ramaswamy’s case where also the matter was referred to a larger bench while the matter was pending.

11:10am- Solicitor General refers to Navtej Singh Johar’s case, says that even though the review and curative petition was pending in that case , the issue was referred to a larger bench of 5 Judges. The case was concerning Section 377 of the IPC.

11:05am- Mehta tries to substantiate his point by saying that when a question of law arises even in a curative or a review petition the Court has the power to refer it to a larger bench to decide the issue.

11:00am- “As a custodian of fundamental rights it was duty of court to law down an authoritative pronouncement on these questions of law”, Mehta argues.

10:55am- Rule 2 does not restrict the power of the bench depending upon the nature of the matter. The power of the court is unrestricted, says Solicitor General.

10:47am- The reference is a judicial order and the court while reviewing said that it will decide questions of law and the review petition would be decided later, says Solicitor General Mehta.

10:45am- Tushar Mehta reads the judgment authored by the Hon’ble former Chief Justice Ranjan Gogoi and submits that the matter is not related to review of Sabarimala issue.

10:42am – Solicitor General Tushar Mehta says that the notice was put up on Wednesday regarding the issue whether questions of law can be referred to larger bench. However the reference is not in question.

10:40am- Nine Judges Constitution Bench led by the Chief Justice of India assembles to hear arguments.