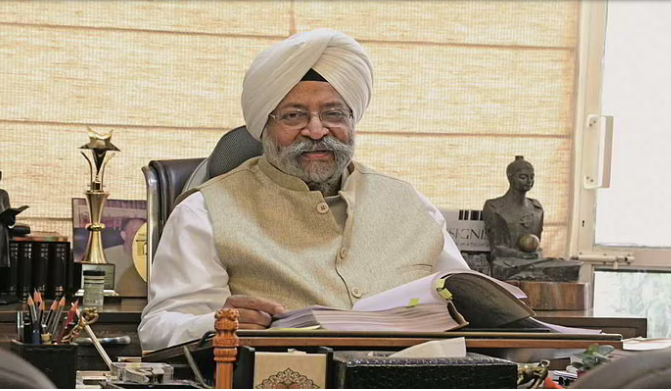 Senior Advocate and Additional Solicitor General of India Rupinder Singh Suri passed away on Monday. He now lives in our memories. Suri was a legend of the bar with over 40 years in the field.

On his passing, Supreme Court Bar Association (SCBA) Vice-President Senior Advocate Pradeep Rai said, “Today, we lost Rupinder Singh Suri ji, who was Additional Solicitor General of India and a president of our Bar. He was a darling of the Bar. Each one of the members who have heard the news of his demise is sad. He was such a loving person. He always used to respond on calls. We have attended several programmes together and on each and every programme, the kind of language, speech and the kind of company he used to give is still memorable. I can’t believe it. May God grant him place in his feet. He was a nice gentleman and we will keep missing him and this loss is not going to be filled in the near future.”

Rupinder Singh Suri also graced APN News’ India Legal show several times and put forth his views on several topics concerning the law. Suri was a key part of the SCBA’s Gur Purab celebrations with him putting in his utmost best to serve the Guru.

He had a wonderful grasp of the intricacies of the law. Suri was immensely popular among lawyers because of his warm and intimate personality.

Rupinder Singh Suri had a degree in Law and a Masters in Economics. He founded the law firm Suri & Co in 1984. Suri was made Senior Advocate in 2009. He has served as the president of both the Supreme Court Bar Association and Supreme Court Advocates on Record Association.

Suri was appointed Additional Solicitor General in June 2020. A trained arbitrator and mediator, Suri was considered an expert in domestic and international arbitration, with a keen hold on commercial issues.

Earlier in the day, Chief Justice of India N.V. Ramanna condoled Suri’s demise as an unfortunate incident. “On behalf of all the judges of the Supreme Court, I express my deepest condolences to the family of Rupinder Suri. A full-court reference will be conducted in due course,” he said.