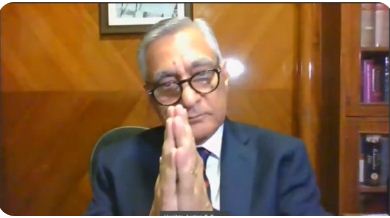 Former Chief Justice of India Justice T.S. Thakur on Sunday said Sir Syed Ahmad Khan dedicated himself for the uplift of Indian society and that his visions were ahead of his time

Speaking at the Sir Syed Commemoration Day organized by the Aligarh Muslim University on its founder’s birth anniversary today, Justice Thakur said a reason for the illiteracy of India is poverty, that poverty not only brings illicit illiteracy but also crimes. He went on to quote a speech of Sir Syed where the AMU founder said, “Ignorance is the mother of poverty when a nation becomes devoid of arts and learning, it invites poverty and when poverty comes it brings in its way thousands of crime.”

Justice Thakur appreciated the efforts of Sir Syed’s crusade against illiteracy and said that it was not only for the benefit of Muslims but for all sections of society.

“AMU campus is like a city in itself, you can see a mini-India here, with dozens of hostels, many departments, thousands of teachers and lakhs of students,” added Justice Thakur.

AMU VC Prof Tariq Mansoor, in his welcome address, thanked former CJI TS Thakur and Prof Francis Christopher Rollin Robinson and Prof Gopichand Narang, recipients of Sir Syed Excellency Award, for their presence. He thanked dignitaries, faculties and presented AMU staff and students on the occasion of the 204th birth anniversary of Sir Syed Ahmad Khan. VC Mansoor appreciated Sir Syed’s advocacy of modern education, equality, rationalism and reforms. He said that AMU’s doors are always open for all, irrespective of caste, creed, gender and religion that it was Sir Syed’s vision that AMU is among the top universities of India. Dr Qaidjoher Ezzuddin was the Guest of Honour.

Sunday marked the 204th birth anniversary of Sir Syed Ahmad Khan, who established the Muhammadan Anglo-Oriental (MAO) College in 1875, the college became what is now the Aligarh Muslim University.