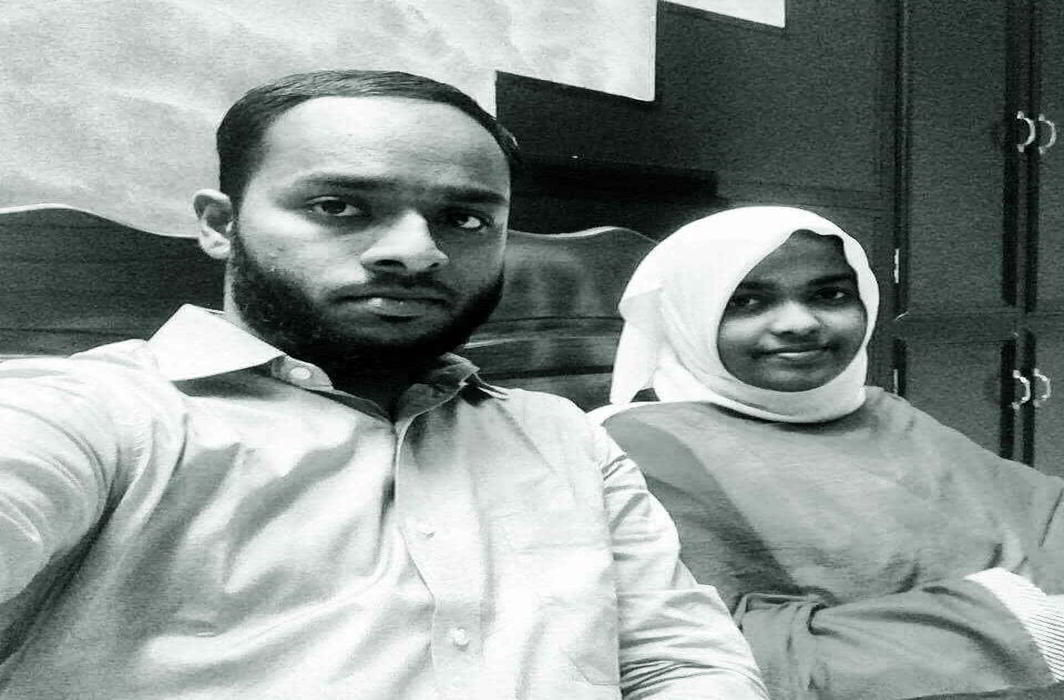 Above: The Kerala High Court had annulled the marriage of Hadiya (right) and Shefin Jahan.

‘Love Jihad’ has been an issue that has been manufactured by extreme right wing activists in the recent past, targeting inter-faith marriages. The target of such fringe hoodlum groups have been to show that Hindu girls (or even Christian girls) are being lured into marriage by Muslim youths, with the idea of involving them in terrorist activities. One such case – commonly known as the Hadiya case – has become famous. This case originated from a division bench of the Kerala High Court.

An almost identical case has arisen in the same court, handled by a different division bench.

Without comment, it would be interesting to see how the two benches have handled the cases.

Hadiya , then K M Akhila, was a homeopathy student in Malappuram before she married Shefin Jahan on December 19 last year. They got introduced through a Muslim matrimonial website in August 2016. Two days after their wedding, Hadiya was asked to appear before the Kerala High Court in a habeas corpus petition filed by her parents. Her parents had approached the court alleging forceful conversion.

The court then granted Hadiya’s custody to her father KM Asokan and also directed the Kottayam district police superintendent to provide them protection. The High Court had annulled the marriage on May 24.

Hadiya, then 25, was not happy. Jahan, 27, challenged the high court verdict in the Supreme Court. On August 10, the Supreme Court asked the National Investigation Agency to look into this. That Supreme Court bench was headed by the then Chief Justice J S Khehar.

The top court also ordered the formation of a committee under the chairmanship of former SC judge Justice RV Raveendran. However, Raveendran had refused to head the committee.

Despite Hadiya being an adult, the high court had maintained that the girl was “weak and vulnerable” and susceptible to exploitation, and that “marriage being the most important decision in her life, can also be taken only with the active involvement of her parents.”

Now the other love jihad case, handled by another division bench of the same court.

On Thursday (October 19) this bench slammed the various religious groups’ campaign against what they call ‘Love Jihad’. The court bench said: “Every case of inter-religious marriage shall not be portrayed on a religious canvas and create fissures in the communal harmony otherwise existing in God’s own country Kerala”.

This division bench, comprising Justices V Chitambaresh and Satish Ninan said this in case – another habeas corpus petition – filed by Anees Hameed, a 25-year-old from Kannur, who was seeking the release of his wife Sruthi Meledath from her family’s custody. This bench ruled that Sruthi be allowed to stay with Hameed and dismissed the woman’s parents’ petitions, as well as a helpline run by a Christian group that wanted to implead itself in the case.

The court said it will “protect the individual liberty of even the lowest citizen of this country and unlock the doors of freedom if there is a faintest doubt that she is unlawfully confined or illegally detained.”

Like Hadiya, Sruthi too had stated in court that after the marriage her family had forcibly kept her away from her husband. Sruthi had been confined to Siva Sakthi Yoga Vidya Kendram near Kochi, which reportedly helps “reconvert” Hindu women who have embraced other religions.

In this case the court’s observations are critical. The bench said: “We are appalled to notice the recent trend in the state to sensationalise every case of inter-religious marriage as either love jihad or ghar wapsi. Disturbing news is coming from several parts of the country that young men and women who undergo inter-caste marriages are threatened with violence or violence is actually committed on them.

“In our opinion, such acts of violence or threats or harassment are wholly illegal and those who commit them must be severely punished. This is a free and democratic country and once a person becomes a major, he or she can marry whosoever he or she likes. If the parents of the boy or girl do not approve of such inter-caste or inter-religious marriage, the maximum they can do is that they can cut off social relations with the son or the daughter. But they cannot give threats or commit or instigate acts of violence, and cannot harass the person who undergoes such inter-caste or inter-religious marriage,’’ the bench said.