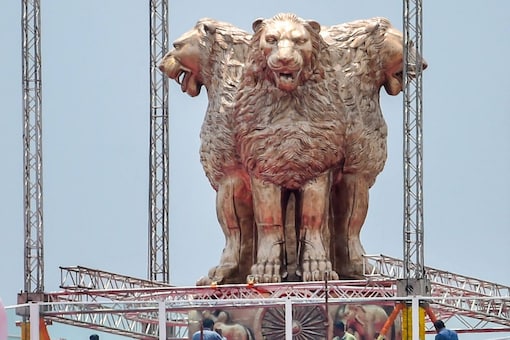 The Supreme Court rejected on Friday a petition filed against installing the State Emblem atop the Central Vista building, claiming that its design was in violation of the State Emblem of India (Prohibition Against Improper Use) Act, 2005.

The Bench of Justice M.R. Shah and Justice Krishna Murari said that they have seen the emblem and found it not violative of the law.

The Court remarked that the impression the emblem gives depends on the mind of the person. It was a matter of perception, not violation.

The Bench said in its order that the Court has gone through the emblem of which grievance is made, and can say that it is not in contravention with the Act.

The petition was filed by Advocates Aldanish Rein and Ramesh Kumar Mishra, who believed that the lions portrayed in the emblem inaugurated by Prime Minister Narendra Modi appear ferocious and aggressive with open mouth and visible canines, in contrast with the State Emblem preserved in the Sarnath Museum, where the lions seem to be calm and composed.

The plea stated that the Central government has violated the sanctity of the state Emblem.

It contended that the state emblem of India was a mark of the identity of the Republic of India, which belongs to ‘We the Indians’. When this identity is interfered with, it hurts the national sentiments of it’s citizens, added the petition.

The State Emblem, cast on the roof of the new Parliament building, was unveiled by the Prime Minister in July.

Opposition parties have been criticising the expression of the four lions depicted in the State Emblem, and alleging that the emblem by Modi government has defaced the real emblem and thus violated the Constitution.

The Central government, however, justified the design, saying that it was made after due diligent research and a thorough procedure.

The petitioners stated that the emblem was visibly different in the design of lions, which depict a changed composure of lions than that of the Lion’s Capital of Ashoka preserved in the Sarnath museum.

The plea also said that the Motto ‘Satyameva Jayate’ written in Devanagari script below the profile of the Lion Capital as envisaged in the Act to be mandatory, also seems missing in the newly installed emblem.

The petitioner said that it completely changed the character and nature of the lions on the emblem and by missing the motto “Satyameva Jayate” written in Devanagari script below the profile of the Lion Capital as envisaged in the Act, was not only changing the basic message the piece of art wanted to convey, but was in fact, a brazen insult to the country’s National Symbol.

The petition also contended that the right to life enshrined under Article 21 of the Constitution has been held to mean a life with dignity.

The petition clearly stated that a dignified life would include the protection of one’s national symbol without alteration.