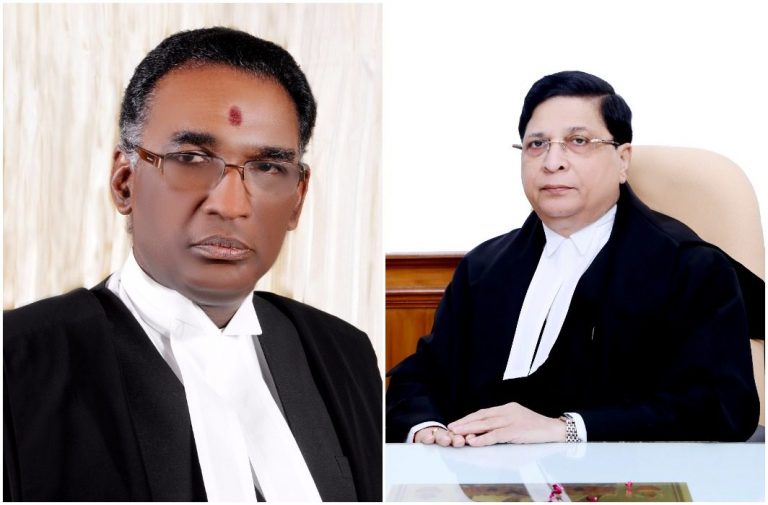 It may be recalled that the Centre had earlier de-registered 46 medical colleges for substandard facilities. Custodians of the Prasad Education Trust in Uttar Pradesh approached the Supreme Court for relief after they were debarred in August 2017 from admitting students for academic years 2017-18 and 2018-19.

Allegations have thereafter been made regarding this bribery possibility.

In the meantime, a Supreme Court bench comprising the CJI, Justice Khanwilkar and Justice Amitava Roy who were hearing the matter, stayed the Medical Council of India’s notification and allowed five medical colleges to admit students. The FIR filed by the CBI on September 19 under the Prevention of Corruption Act alleges that these five colleges then approached former Orissa and Allahabad HC judge, Justice (retd) Ishrat Masroor Quddusi, to supposedly fix the matter. First, they approached (allegedly on the advice of Justice Quddusi) the Allahabad HC, where they got a favourable order.

After that, Prasad Trust’s functionaries approached the Supreme Court and Justice Quddusi allegedly introduced them to Biswanath Agrawal, a resident of Bhubaneswar, Odisha, who claimed he was close to “senior public officials” and would “settle the matter in the apex court”.

On September 20, Quddusi and five others were arrested by the CBI and presented before Tis Hazari Court the next day. Judge Manoj Jain of the special court handling CBI cases sent Quddusi and the others to custody after the CBI said their custodial interrogation was required to unearth the “larger nexus” in the alleged medical college scam.

While hearing Jaiswal’s petition, Justices Chelameswar and Abdul Nazeer decided that the case would be heard by a five-judge constitution bench on Monday (November 13). The judges selected for that bench were Justices Chelameswar, Ranjan Gogoi, Madan Lokur, Kurian Joseph and AK Sikri.

This order was passed by Justices Chelameswar and Nazeer, after hearing senior advocate Dushyant Dave, who pressed for the constitution of a Special Investigation Team (SIT) to probe allegations. Chief Justice Dipak Misra was not included on this bench, just because—as Dave pointed out—the other similar case was being heard by the CJI.

This seemed a flawed decision. The roster of the apex court, including the formation of constitution or special benches is entirely the CJI’s discretion. The No. 2 (officially) of the court will not have this power.

That was what the CJI made clear on Friday. In dealing with the petition of Bhushan, the CJI too formed a constitution bench that did not include judges from the Justice Chelameswar-constituted bench. The CJI’s bench includes the CJI and Justices RK Agrawal, Arun Mishra, Amitava Roy and A M Khanwilkar.

On Friday, however, tempers soared. Advocate Bhushan raised his voice while replying to the CJI. Though he apologized later, he had to be removed by marshals.

Bhushan, screaming at the top of his voice, said: “CJI should not be the member of this bench. He has corruption charges against him.”

A visibly angered CJI replied: “You are not even worth contempt.”

At that SCBA president Sodi said: “The bench can’t bring any favourable order under threat of terrorism.”

Justice Agrawal then told the SCBA president: “This is the duty of bar to take care of lawyers’ conduct. This court is not duty bound to look into lawyers conduct. We are here not here to protect any.”

Justice Amitava Roy got angry and told Bhushan: “Please don’t raise your voice. You are supporting the cause of accusing a sitting Chief Justice on his face.” Another lawyer said: “People are laughing at us.” There was a suggestion that both matters (related) be listed before a full court.

Talk was on, when Bhushan lost his temper and the altercation grew. Lawyers from Prashant Bhushan’s side pleaded: “Please don’t print this in the media. Please don’t allow any media person to publish this on news channels.”

Said the CJI: “There will be no anarchy or chaos. There cannot be an order directing a matter to be placed before a particular bench. If any such order has been passed by any bench, that will not hold the field… So that takes care of Monday’s bench.”

That was the end of the Justice Chelameswar-constituted constitutional bench.

There was trouble among lawyers too. One lawyer was heard saying: “Take our oral contempt petition. He (Prashant Bhushan) pushed us (while he was being escorted by the Marshalls of the court).”

Advocate Kamini Jaiswal said: “This order (of the CJI) may be placed before the other bench. In the last month there have been six matters which were before other bench taken by CJI.”

To that the CJI replied: “Yes. That is my prerogative. The MoP matter ought not to have been heard on the judicial side (hence he took it up and ordered as he did).”

PS Narasimha asked: “Can anyone say, ‘I know someone and can get it done’.  Can this be the basis for contempt?”

Justice Arun Mishra said: “It cannot be read against any judge. Can there be any FIR against a judge?”

Justice Khanwilkar said: “Are we going to put our judiciary at the disposal of an SI?”

There was a suggestion by RS Suri that contempt may be issued against all concerned, including Ms Kamini Jaiswal, Prashant Bhushan, etc.

To that the CJI said: “That’s on contempt. We are on judicial propriety.”

A senior advocate observed: “These petitions have caused a perception that the Supreme Court is worse than a political establishment.”

Asked the CJI: “What is your suggestion?”

Bhan said: “They must explain their conduct.”

CJI, asking Bhushan, who was back: “You say ‘I lost my temper’. You can lose your temper. We cannot.”

CJI asked the opinions of senior advocates present in court. Advocate RP Bhat said: “This is contempt per se. Spoiling the image of the court.”

Things rested at that.