The Feminisation of the Bar 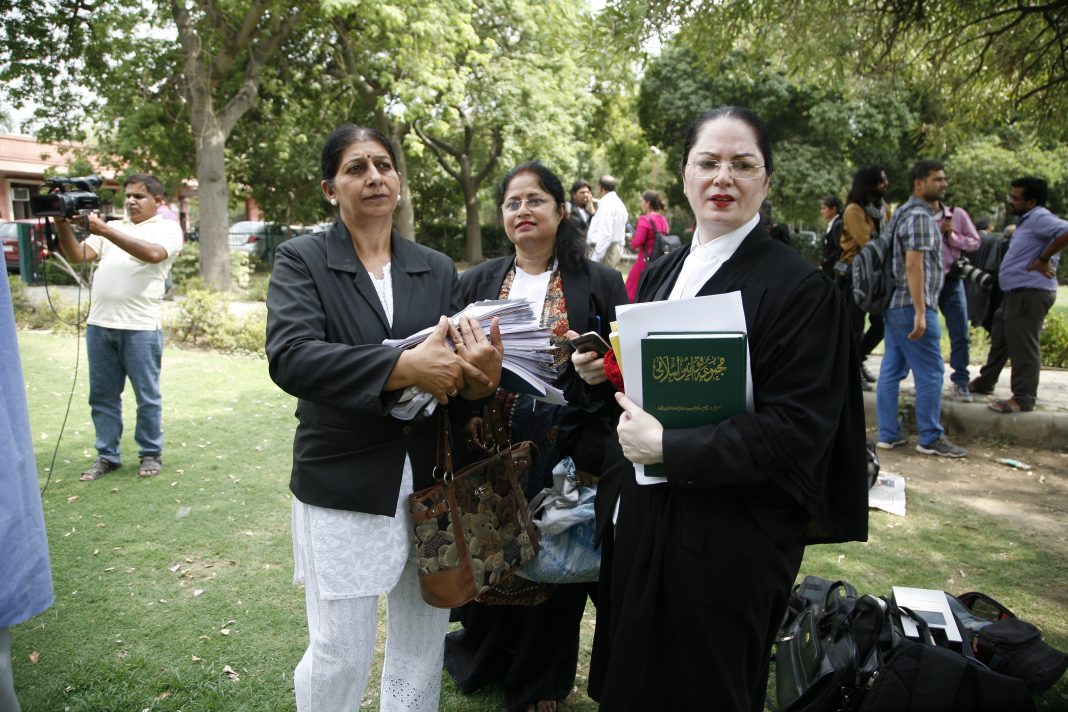 In the 70 years of the republic, women have made contributions in every walk of life. But the struggle for gender equality and justice  continues in the legal profession despite the fundamental right to equality

In my last article, (see Baxi, India Legal, September 21, 2020), while counting the number of lawyers, I was surprised to find that in multiple interim orders of a total 18 pages, as many as eight listed the counsel representing parties and these were an overwhelming number of males. I then passingly used the phrase “feminisation of the bar”; I thank Shobha John, who requested me to develop a full article which has led me to tap some hidden potentialities of the phrase.

The feminisation of the Bar has yet to proceed apace, although we have moved far away from the times when women had to struggle to be counted as “persons”. The great legal dictionary (The General Clauses Act, 1897) ambivalently said that ‘“words importing the masculine gender shall be taken to include female”. The struggle against exclusion from the legal profession led eventually to the Legal Practitioners’ (Women) Act, XXIII of 1923, which abolished this discrimination.

Jhuma Sen has portrayed vividly its prehistory (The Wire, February 13, 2019). Yet, in the 70 years of the republic where women in every walk of life have made notable contributions to public life as proud citizens, the struggle for gender equality and justice still continues in the legal profession (LP).

Justice Dhananjaya Chandrachud cited (in his keynote address at the Harvard Law School Centre on December 11, 2017) that “women in the Indian  LP” remained at only five percent compared to “50 percent in Finland, 30 percent in the United States, and generally between 10 percent and 20 percent in Asian countries”.1 He further continued this sobering tale by speaking of “an abysmal 2 percent” of senior advocates being women.

Similarly, in “the 63-year-old history of the Supreme Court, out of 204 judges, only five have been women”. It is no consolation to know that in 2020 we have two women justices on the Court (now with the recent retirement of Justice Banumathi). There has been no woman Chief Justice of India. (See Upendra Baxi, Women in Judiciary: From Raw Deal to New Deal?, India Legal, November 26, 2018.)

Further, it is well-known that the legal caste is all-male and it does not matter whether the executive or judiciary has a commanding voice in judicial appointments. “As I have observed in 2018, all Union law ministers (from Bhimrao Ramji Ambedkar to Ravi Shankar Prasad) have been male. Not a single woman has adorned the office of the Chair of the National Law Commission and the Bar Council of India (though it is an elective post). No woman has been appointed to the constitutional position of attorney general (though two—Indira Jaising and Pinky Anand have been recently appointed as additional solicitor general). Very few women are the Chairs of national administrative and statutory tribunals. Here, I am not even touching upon the equally dismal experience in various states in India. This, despite the fact that we had a woman president, prime minister, president of the Congress Party and many powerful women chief ministers”.

Indira Jaising and the National Lawyers Campaign for Judicial Transparency and Reforms have argued that putting lawyers into classes violates the fundamental right to equality under the Constitution. And as Professor Shubhankar Dam (writing in qz.com, Nov 08, 2017) reminded us, they constitute an “oligarchy” decreeing that “the legal fraternity in India shall remain divided between a smattering of royals and a sea of plebeian lawyers”. Women faculty and students in India have much more equitable ratio than in the judiciary and LP. This oligarchy at the Bar, of course, reinforces the worst forms of patriarchy. One may go further by listing the stories of discrimination on the ground of sex and even examples of aggravated sexual harassment at the workplace.

We have to carefully notice how small, and giant, steps were taken in incremental changes in law and the Constitution. But I will not go through the many landmark cases filed by a few women lawyers that promoted gender justice in domestic and public life and also male hostility, backlash and aggression. Nor will I go into the history, and the aftermath, of the Mathura Open Letter written by four law teachers which ignited concern about the central reality of violence against women and inaugurated a new era of democratic judicial accountability. Nor may we ever forget the feminisation of the basic structure made in, and developed since Vishaka, which judicially prescribed the law relative to sexual harassment at the workplace.

A second meaning of the “feminisation” of the Bar will take us to the model of liberal liberalism that pursues gender justice through legislative and constitutional change. Here, more work needs to be done to explore the intersectionality between gender justice and other kindred movements such as labour, environmental, indigenous people, Dalits and Bahujan movements, besides the conversations about gender justice among rural and urban women. We also need to ponder effective liberal strategies, besides having more women representation, between the Bar and the Bench and the feminisation of the law and the Constitution. Are they one and the same phenomenon, or two sides of the same coin? Or are they so distinct as to make the available good the enemy of the best? Is it the case that greater women representation on the Bench and the Bar would automatically enhance the quality (and the quantity) of gender justice and equality?

There is little question that all women will be one in decrying sex-based violence, degradation and servitude as preventable moral evils and social harm. But not all women share the central tenant of liberal legalism: the complete equality of sexes in all matters of gender justice; their religious faith, for one thing, and their social location on the other lead them to adjust with a lot of subordination inconsistent with the liberal legalist virtues. Some may debate, and even detest, many a practice of contemporary “feminism” as westtoxification. And even progressive feminists in their own life cycles who “have to deal with massively shifting social perspectives on their life choices” hailed “the cross-generational moment” as a “a passage of legacy, wisdom, memory and yet unanswered questions and resolved conflicts belonging to political and intellectual struggles that are much larger than life and much too important to leave behind”.2

We also learn from experience that far from being a war of sexes, many male justices have engendered legal and constitutional rights and values. Not all males are necessarily patriarchal and contribute a good deal towards women’s emancipation. Only when we recognise the heterogeneity of women and men as moral agents, can we reckon the paradox of why only a handful of women at the Bar, and some progressive Justices, have valiantly paved the way for equality and justice for women, and now for trans-people.

Greater representation of women at the Bar and Bench is, of course, essential and must be accelerated; but we ought also to realise that recognising plurality will bring to the table diverse views, and not always the liberal feminist visions of gender justice.

What Hisham Sharabi now identifies as neo-patriarchy (a “modernized form of traditional culture” 3) is not only a phenomenon of the modern Arab world. It is more widespread globally than is fully realised. The gains of liberal legal feminism seem most imperilled when neo-liberalism becomes structurally complicit as well as compliant with the neo-patriarchies of regressively conservative religious forces. The so-called “moral free zones” of free markets, in which neo-patriarchy is encased may well imperil the present victories of liberal “legal feminism”.

How then can an “overlapping consensus” (as John Rawls declared) be ensured in severely divided societies, crafting a “reasonable pluralism of rights and justice”?

One answer is to return to the basic structure of the Constitution which also includes now Part IV-A. The duties, on the one hand, stress “spirit” of critical enquiry, humanism, social reform, scientific temper and renunciation of all practices “derogatory of dignity of women”, and on the other hand, require us all to “value and cherish the rich heritage of our composite culture”. Do not these constitutional obligations help us in developing reasonable pluralism?

1At a book launch (on December 11, 2017) The Indian Legal Profession in the Age of Globalization: The Rise of the Corporate Legal Sector and its Impact on Lawyers and Society, (Cambridge University Press, 2017) held on December 11, 2017.

Did you find apk for android? You can find new Free Android Games and apps.
Share
Facebook
Twitter
Pinterest
WhatsApp
Previous articleJustice via video conferencing is here to stay
Next articleGovt, DDU College playing the blame game as staff gets no salary, says Delhi High Court