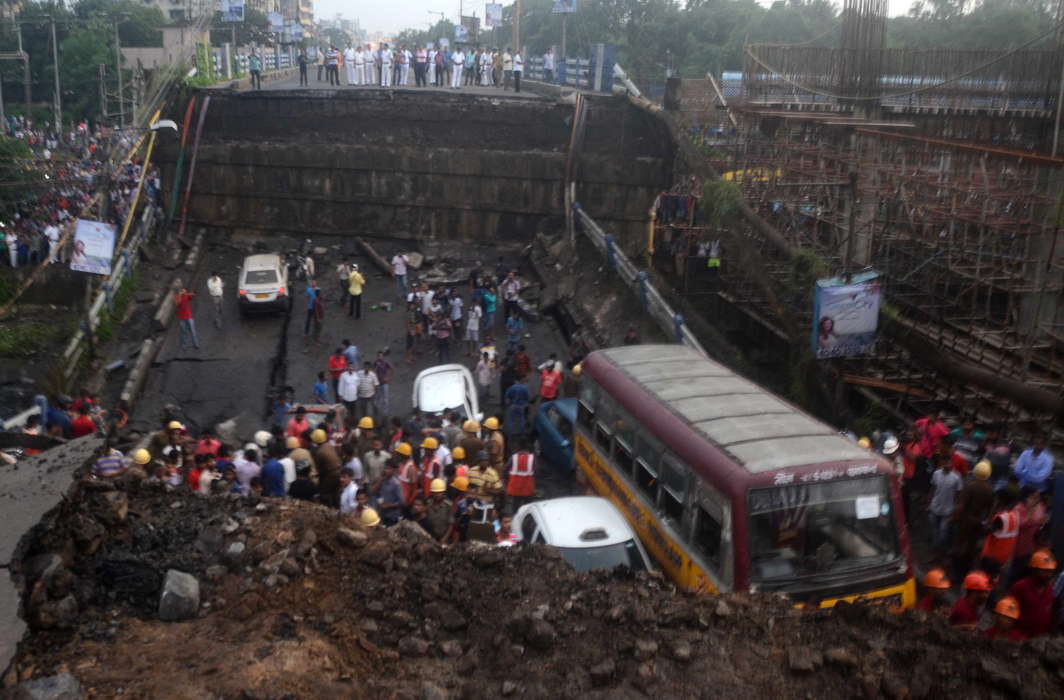 Above: Rescue operation at the flyover collapse site in south Kolkata/Photo: UNI

Building collapses and fires are not the only causes of urban deaths, and these are not confined to Mumbai or Delhi. There are many more reasons and many more cities and towns

Minutes after the bridge collapse in south Kolkata late on September 4, twitterati went into overdrive. The crux of the posts were that all construction in the metropolis is ruled by syndicates or gangs of party cadre, mostly unemployed men, who often change their political colours. From supplying construction material to labour to fixing wages, they take all decisions. No questions are asked, no answers given.

They were merely echoing what the Supreme Court observed recently while hearing the Delhi sealing case concerning illegal construction in the capital. The apex court said: “People are dying in building collapses and fires because corruption has eaten into town planning and grant of building permits across the country.” It added: “In Mumbai, people are dying. Only recently there was a huge fire at Kamala Mills, no lesson was learnt…. How long will this situation continue? How many lives more?… You make laws and then you make a mockery of these laws.”

Building collapses and fires are not the only causes of urban deaths, and these are not confined to Mumbai or Delhi. Mega and ultra-mega construction projects promoted by the government or moneybags block rainwater’s right of way and storage (rivers, streams, canals, tanks, wetlands and other associated common land) leading to massive floods and deluge, resulting in death and destruction.

Then there is pollution—air, water, land. Thirty of the most polluted cities in the world are in India with Delhi being the worst. Air pollution is affecting the respiratory health of people in 102 cities. Water pollution is the cause of exponential increase in gastro problems, particularly among children and infants. All these cause death. More Indians die cleaning sewers than fighting terrorists in Kashmir. Over the last eight years at least, the death toll among sewer workers has started to converge with that of security forces deployed in the beleaguered state. In 2017, India’s sewage system killed 90 people compared to 54 security personnel who died combatting militants. Heaps of waste and garbage adorn the streets and open spaces of most cities and towns, creating a rotten stink.

All this indicates that there is nothing known as urban governance. There was an attempt to set up Urban Local Governments (ULGs) by enacting the Constitution (74th Amendment) Act in 1992 and to empower them to perform the key tasks assigned under the 12th Schedule (Article 243W): Urban planning and development, landuse and construction; economic and social development; roads and bridges; water supply; public health and sanitation conservancy; urban forestry and environment protection; safeguarding interests of weaker and handicapped sections; slum improvement; urban poverty alleviation; provision of urban amenities and promotion of cultural, educational and aesthetic aspects.

But even after decades, there is no trace of such governments in India. Former Prime Minister Manmohan Singh acknowledged this in December 2005 while launching the Jawaharlal Nehru National Urban Renewal Mission (JNNURM): “Urban Local Bodies (ULBs) unfortunately, with some exceptions, have not been enabled to look in­ward and build on their inherent capacities, both financial and technical, and instead are still being seen in many states as ‘wards’ of the state governments. This should and must change.”

To remedy this, the Government of India introduced several reforms in the Rs 1,00,000-crore JNNURM to usher in ULGs in place of ULBs:

Most of these have not come about and India’s metropolises and cities continue to stink and sink. These include Delhi, Mumbai, Chennai, Kolkata, Bengaluru, Kochi, and a host of smaller cities. Uncontro­lled urban sprawl accelerates monsoon disasters. Between the top five metros—Mumbai, Delhi, Kolkata, Chennai and Bengaluru—the population is a whopping 38 crore and climbing. Water­logged roads full of craters and potholes, flood-related deaths and crippled infrastructure, urban displacement and economic loss make wearingly repetitive news every time it rains. India is an urban disaster at a fairly advanced stage.

The reasons for sinking cities vary by location. They are migration, construction of mega buildings, ground sinking naturally in coastal cities built on river deltas, rising sea levels and depleting groundwater. Migration from the countryside into urban areas places stress on natural resources. The weight of huge buildings presses down on earth. Many Indian water bodies have been built over through the process of urbanisation because they are rarely mentioned in the municipal records. Planners only see land, not water. Urban floods are capable of causing major economic, social and environmental losses.

Despite the challenges, urban governance remains dismal, almost non-existent. This is best described by the chaos, multiplicity and duplicity in the “governance” of the Chennai Metropolitan Area which is morphing from metropolis to megapolis. Urban planning, regulation of land use and construction of buildings are dealt with by the Chennai Metropolitan Development Authority, Municipal Corporation of Chennai (MCC) and a host of ULBs. Planning for economic and social development is the responsibility of the Commissioner, municipal administration. Roads and bridges are that of the MCC, ULBs and the highways department. Water supply is under the Chennai Metro Water Supply and Sewerage Board. Public health, sanitation, conservancy and solid waste management are handled by the MCC and ULBs. Fire service is under the Director of Fire Services. Protection of environment and promotion of ecological aspects is under the Department of Environment & Forests and TN Pollution Control Board. Safeguarding the interests of the weaker sections, including the handicapped and mentally retarded, is that of the Department of Social Welfare. Slum improvement and upgradation is under the Tamil Nadu Slum Clearance Board. The Department of Tourism looks after cultural, educational and aesthetic aspects.

The ULBs deal with urban poverty alleviation; amenities and facilities such as parks, gardens, playgrounds; burials and cremations; cattle pounds; prevention of cruelty to animals; public amenities including street lighting, parking lots, bus stops and public conveniences and regulation of slaughterhouses and tanneries. In all this, the role of the elected mayor, supposed to be the head of ULG, is minimal and confined to just a few of the activities listed above. Most of the functions are with parastatal agencies which are under the state government.

The situation is the same elsewhere. The Municipal Corporation of Greater Mumbai is a case in point. Within the framework of the Mumbai Municipal Act, 1888, nine collateral authorities are mandated to be constituted with the more important ones being the Standing Committee, the Improvements Committee, the BEST Committee, the Education Committee, and the Ward Committees, each of which is deliberative in nature. In all this, the role of the mayor is at best decorative.

Every city has a master plan which a legal document is prepared after discussion, debate and deliberation. Develop­ment control rules that regulate zoning and construction are a part of the master plan. These plans have identified development strategies that need to be implemented faithfully. But the plans are literally thrown into the waste paper basket and multi-storeys and skyscrappers—commercial and residential—come up in utter violation. Politicians and plunderers don’t look at plans, they look at hard currency. This is what stares at your face: Corruption. And this leads to disaster, destruction and death.

In the midst of all this lawlessness, greed and corruption, Prime Minister Narendra Modi has grand designs to build 100 futuristic “smart” cities in India which do not address any of these ills but instead pander to the corporate agenda of digitalisation and automation. Smart Cities Mission (SCM) was launched on June 25, 2015 by Modi with the strategic components of city improvement (retrofitting), city renewal (redevelopment) and city extension (greenfield development) plus a pan-city initiative. All these are technology/real estate-oriented, catering to the interests of private property developers with automation to manage them. By operating through Special Purpose Vehicles, the SCM will derail whatever democracy is left in urban governance and replace it with corporatisation.

So, assisted by technology, the urban stink and sink continues unabated. All the strictures, directions and judgments of higher courts are of little avail!