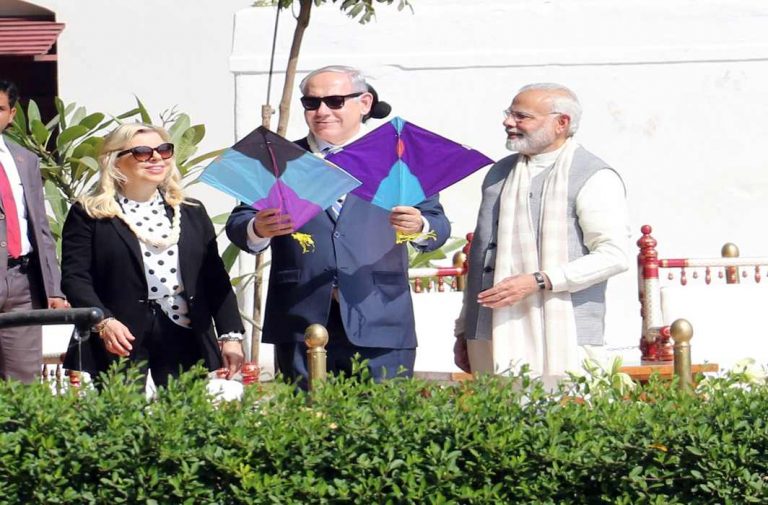 Despite the love-fest between these two countries, their own strategic interests in the Middle East and elsewhere will continue unhampered and guided by the welfare of their own people

Prime Minister Benjamin Netanyahu’s six-day visit to India just months after his Indian counterpart Narendra Modi’s landmark trip to the Jewish state is a celebration of the India-Israel love-fest. The once almost secretive ties were brought out of the closet by Modi. All this was despite Delhi’s UN vote against the US for declaring Jerusalem the capital of Israel, which had sparked international outrage.

While Israel said it was disappointed, one vote would not affect the entire gamut of this relationship. But beyond the high octane compliments Modi and Netanyahu lavished on each other (the visiting dignitary calling Modi a revolutionary leader), India and Israel both accept that they cannot have the kind of strong strategic bonds that Israel has with the US. It certainly does not suit India to go out on a limb for Israel. The bromance notwithstanding, Modi’s visit next month is to Ramallah for a meeting with Palestinian president Mahmoud Abbas. He will also visit Oman. At the same time, Israel has thriving ties with China and is enthusiastic about Presi-dent Xi Jinping’s Belt and Road Initiative. India was the only major country not to send a representative to Beijing for the ancient Silk Route land and sea jamboree in May 2017.

There is much admiration for Israel in India. The BJP-RSS, as well as many hardliners in India are in awe of Israel’s military strength and would like to emulate its aggressive stand against those who hurt its self-interest. Many want India to do the same with Pakistan. However, better sense has guided the leadership of the BJP. Whether it was former Prime Minister Atal Bihari Vajpayee or Modi, India’s self-interest comes before the ideology of their followers.

Egypt and Turkey have had ties with Israel for several decades. Many others have done business away from the public eye because in the bazaars and mohallahs of the Arab world, support for Palestine remains strong. The geo-politics of the Middle East is shifting and the ongoing Sunni-Shia divide is also changing, thanks to Saudi Arabia taking on Qatar. In this flux, the emerging alliance is of Saudi Arabia, the US and Israel ranged against Iran and Syria’s Bashar al-Assad.

The Palestinians and some of the Gulf nations were apprehensive when Modi came to power in 2014. However, he has been active with his Gulf diplomacy and has visited Saudi Arabia, the United Arab Emirates (UAE), Qatar and Iran. The Crown Prince of Abu Dhabi, Sheikh Zayed Al-Nahyan, was the guest of honour at last year’s Republic Day parade. Apart from Palestine, Modi is also set to travel to the UAE and Oman in the second week of February.

Modi is keen that the UAE (his second visit) and Saudi Arabia invest in India. That is crucial to bring in jobs as the BJP prepares for a general election in 2019. Nearly eight million Indians work out of Gulf Cooperation Council (GCC) countries, sending much-needed remittances to families back home. The GCC is among the top three of India’s trade partners. India also buys most of its oil and natural gas from the region. So it is imperative for Delhi to balance its ties with Israel and the Arab and Muslim world.

Moreover, terrorism is now a major concern for Gulf rulers and Saudi Arabia has been cooperating with Delhi on this. It has sent back wanted terror suspects taking refuge in that country. All this is a big plus, considering that in the past, there was little cooperation on this front. Though Saudi Arabia has close ties with Pakistan, its relations with India are picking up pace.

Professor PR Kumaraswamy of Jawaharlal Nehru University, who has written a seminal book on India-Israel relations, told India Legal: “Bilateral issues among countries are never static. India has to react to a changing world environment. In July last year, when the prime minister made a stand-alone visit to Palestine, the issue of Jerusalem was not in the spotlight. When it did come up, India did what it had to by voting against the US. Modi is now going on a trip to Palestine; it is as it should be. India’s foreign policy has to be pro-active, which it has become with Modi.”

Kumaraswamy believes that Modi’s chemistry with Netanyahu and other world leaders is very important, especially during a crisis when he can pick up the phone and talk to them.

India also has historical ties with Iran, a country Israel hates and opposes at every turn. The week be-fore Netanyahu’s Delhi visit, Iran’s Minister of Urban Transport Abbas Ahmad Akhoundi was in Delhi and signed a railway pact with Union Road Transport and Highways Minister Nitin Gadkari to the tune of $2 billion. Of this, $600 million will be used to buy locomotives and freight cars from India. “They will also be used in the Chabahar-Zahedan railroad to accelerate development of Chabahar Port in line with India’s goal to connect to Central Asia and ultimately, Europe,” Gadkari said after the event.

India is hoping to use Chabahar Port for its exports to Afghanistan as Pakistan refuses transit through its territory. India and Iran have worked together with the Northern Alliance against the Taliban when it was in power in Kabul. Delhi will not change this to please Israel.

Yet, this is not to take away from the high-profile visit of Netanyahu. But this is more of a celebratory trip with emphasis on optics. Substantive issues like defence, dry-land agriculture, homeland security and intelligence co-ordination have been dealt with earlier.

What is often termed the tectonic shift in India-Israel relations has already happened. The effort now is to expand co-operation into as many other sectors as possible. Nine MoUs were signed during the Modi-Netanyahu meeting at Hyderabad House, including training in cyber security, petroleum and natural gas, air transport, space as well as co-production in films. The emphasis now is to expand economic ties between the two nations. Netanyahu was accompanied by over 100 Israeli business leaders. Significantly, executives from Israel’s Aeronautics Defence Systems, the country’s drone-makers, also accompanied the prime minister.

At the business summit attended by both leaders, Modi urged Israeli defence companies to manufacture in India. However, despite this, few foreign companies have ventured to take advantage of the offer mainly due to the bureaucratic red tape that continues to hang over these initiatives.

Selling arms and defence equipment to India is much easier than co-production. The visit also revived the deal to buy Spike anti-tank missiles from Israel just weeks after New Delhi had exited the $500-million deal.

India is one of the largest buyers of Israeli defence equipment. Ironically, the process began even before 1992 when Congress Prime Minister PV Narasimha Rao restored full diplomatic ties with Israel. In 1962, during the India-China war, Israel’s prime minister, David Ben Gurion, is said to have offered help to Jawaharlal Nehru.

Golda Meir followed the trend by secretly supplying weapons to India as it prepared for the 1971 Bangladesh liberation war. During the Kargil war in 1999, Israel supplied India with laser-guided missiles.

In geopolitics as the saying goes, there are no permanent friends, just permanent interests. Whether it is India or Israel or any other country, alliances keep shifting with changes in the strategic environment. Israel, on its part, has thriving ties with China, the world’s rising super-power and India’s main challenger in Asia.

Netanyahu, on a visit to China last year, also spoke with flourish about China-Israel ties, dubbing it a “made in heaven” pairing. He has used the same flowery language to describe relations with India. However, in Delhi, he added that the marriage, while made in heaven, is being consummated here.

China also buys arms from Israel. In fact, after Russia, China is Israel’s second largest buyer of arms. Like India, China has no bilateral problems with Israel. The differences arise mainly because of Beijing’s support to Palestine.

India’s relations with Iran or Israel’s with China is a given in international diplomacy. None of this will, however, affect India-Israel ties. Both Modi and Netanyahu know this well.