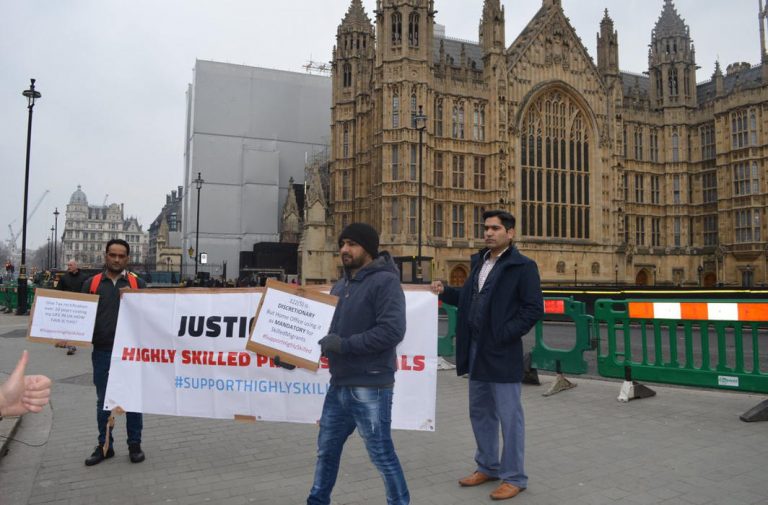 Above: A protest march by Indian-origin British citizens/Photo Courtesy: Twitter/@HighlySkilledUK

Anjali Sharma (name changed on request of anonymity) is a nervous wreck. She jumps every time there is a knock on her door. She is fully packed and waiting for British Home Office officials to come calling anyday and deport her back to India. Sharma has been living and working legally in London for the last six years as an administrator in a National Health Service Trust hospital, but due to one small error in her visa application she has been declared a criminal who should be sent back home.

Sharma is one of about 1,000 highly skilled migrants from South Asia who are wrongly facing deportation due to the ‘‘abuse” of a section of the Immi­gration Act designed to tackle terrorism. Using the controversial Section 322(5) of the Act, which is meant to deal with terrorists or individuals judged to be a threat to national security, the Home Office is refusing Indefi­nite Leave to Remain (ILR) visas to teachers, doctors, lawyers, engineers and IT professionals, accusing them of lying in their applications either by making minor amendments to their tax records or having discrepancies in the declared income.

“Ten members of our group have taken the Home Office to the First-tier Tri­bu­nal over the use of 322(5) in the past six months. Nine of these won their cases, with the appeal judges ruling that the government’s use of Section 322(5) was wrong,” explains Aditi Bhardwaj, an organizer of the Highly Skilled Migrants (HSM) support group. “At best, this suggests that the Home Office is recklessly incompetent in its use of 322(5). At worst, however, the Section is being applied by the Home Office so often and being overturned so frequently when challenged at the highest level, that I ask if there is a blanket policy which the Home Office is using internally, which no one is aware of,” she added.

This is the latest immigration scandal to hit the Home Office which has been following a policy of creating a “hostile environment” for illegal immigrants in the UK such that they would want to leave and return to the country of their origin. The policy was put in place by Prime Minister Theresa May when she was home secretary in her predecessor David Cameron’s cabinet.

From then, May was known to be obsessed with reducing the number of immigrants in the UK. She had touted that the environment should be such that the immigrant should feel “deport first, appeal later”. Advertisements tel­ling immigrants to go home be­fore they are caught were mounted on vehicles and driven around minority ghettoes.

Even as the HSM protested outside Parliament, news came in of hundreds of Indian doctors who had been recruited by the NHS being denied visas to enter the UK. “We are aware of a few hundred doctors, the majority of whom would be Indian, waiting to come to the UK. We are very keen to support the NHS and this is extremely disappointing,” said Dr Ramesh Mehta of the British Association of Physicians of Indian Origin (BAPIO).

The NHS has a huge shortage of doctors and trained medical staff and BAPIO has been helping public body Health Education England in an initiative to bring doctors from the subcontinent. These doctors, mostly from India, Pakistan and Sri Lanka, fill roles, particularly in emergency medicine and care of the elderly where there is a shortage. However, they have come up against this roadblock.

“The Home Office has been absolutely bureaucratic and is stopping these doctors from coming in. They are getting frustrated as they have jobs in India, and some are now saying they don’t want to come,” said Dr Mehta. Even the NHS is upset with the Home Office. “NHS organisations have been unable to obtain the required permits for months for essential medical colleagues, and we have called on the government to urgently address this serious problem,” said Danny Mortimer, chief executive of NHS Employers.

The Evening Standard newspaper, edited by former Conservative Chancellor of the Exchequer George Osborne, pointed the finger directly at his party colleague, the prime minister, claiming that May herself had rejected calls for an easing of the visa rules for non-EU doctors.

An immigration row is also brewing over illegal deportation of foreign students, many of whom are from India. Ever since a BBC investigation in 2014 found evidence of fraud at one English-language testing centre, thousands of students who had got the much-needed English-language qualification to stay in the UK from different test centres, were accused of fraud. “Our strong suspicion is that thousands could have been wrongly deported already or are facing difficulties now,” said Sanam Arora, the chair of the National Indian Students and Alumni Union UK.

She blames the immigration policy of “deport first, appeal later” for the fact that students are left with no recourse but to go home.

Arora argues that the burden of proof and blame were swiftly placed on the students rather than the Home Office-approved system that allowed the fraud to happen. The same applied to the issue of “bogus colleges” where, rather than treating students as victims, they were treated by the government as “bogus students” and deported. All these revelations came in the wake of an im­migration crisis that had already been brewing for the May government. It claimed Home Secretary Amber Rudd’s job. On April 30, Rudd was forced to resign when details of the de­nial of rights and mistreatment of des­­cendants of Caribbean and other Com­­monwealth countries became public.

Known as the Windrush generation, after the boat, Empire Windrush, that brought the first 492 Jamaicans to Britain in 1948, Commonwealth citizens and their families were encouraged to move here. This was to help meet acute labour shortages in the NHS, factories, transport system, and so on, caused by fatalities in World War II. Many people from India, Pakistan, Africa and the Caribbean settled in the UK in the 1950s and 1960s without any documentation as it was not required then. Any Commonwealth citizen who came before 1973 had automatic right of settlement.

Under May’s new immigration rules, the Windrush generation has been penalized and wrongly treated as undocumented illegal immigrants. Over the last month, horror stories have been heard of people in their 70s and 80s, who have lived in Britain for the last 50 years and contributed to the society, suddenly finding themselves declared illegal, denied life-saving treatment, unable to return home from holidays abroad or families being separated. There was public outcry and a massive backlash against the government for a policy that conflicted with the high ideals of equality of treatment, opportunity and justice regardless of race, religion and colour that the British pride themselves on.

The stories centred on migrants from the Caribbean, but Diane Abbott, Labour Party spokesperson on home affairs, said: “The scandal also includes those who came from many other Commonwealth countries, including India, Pakistan, Bangladesh and countries in West Africa.”

Rudd paid the price for May’s policy when papers proved that deportation targets had been set by the Home Office and people at the very top were aware of it. Rudd became May’s fall guy and resigned.

Ironically, the immigration policy will now be decided by the new home secretary, Sajid Javid, the son of immigrants who were part of the Windrush generation.

May’s government has apologised for the treatment of the Windrush generation and promised action, including compensation, but has attempted to call it an aberration that had no connection with wider immigration policies. “Measures over many years to tackle illegal immigration are of course a good thing and we stand by those measures,” Javid told parliament on his first outing as home secretary.

However, he did point out: “Like the Caribbean Windrush generation, my parents came to this country from the Commonwealth in the 1960s… I thought that it could be my mum, my brother, my uncle or even me” who could be denied their rights and have to prove their status in Britain despite having lived here for 70 years. Javid, who becomes the first-ever ethnic minority member to hold one of the three most important portfolios in the cabinet, has promised that he will create a “compliant environment” for immigrants.

The biggest irony of all is that now Indian immigrants will have to repose all their faith in a Pakistani-origin immigrant’s son to ensure that their future in Britain is secured. Many recent immigrants from India are supporters of Prime Minister Narendra Modi and have been very keen to ensure that in surveys they are not all tagged under the “Asian” label, along with Pakistanis and Bangladeshis. They are unlike the older immigrants who didn’t mind the bonhomie of all Asians together. They may be forced to change their mind when Javid, a Pakistani-Brit, becomes their saviour!