Do our public institutions have the courage to stand up to the Executive?

Public, constitutional, statutory or private institutions, having voluntary membership, play a great part in the functioning of a constitutional democracy. Institutions that are organs of the State are assigned specific functions by the constitution. They have to be independent and yet are subject to the limitations laid down by the constitution. Their internal strength is one of the guarantees of their independence. They must be strong enough to defend themselves from interference by other State institutions. There is an inherent tendency in the Executive to grab as much power as it can, and for that purpose, encroach upon areas of operation of other institutions by influencing them politically. A survey of the public institutions in India would be instructive to all those who care for a constitutional and democratic political order.

In 2005, Devesh Kapur and Pratap Bhanu Mehta edited and published a few essays about public institutions under the title Public Institutions in India: Performance and Design. A decade has already passed since the publication of that volume and the events that have happened thereafter have greatly affected some of these institutions. Both the original editors, joined by Milan Vaishnav, have now come up with a revised survey of public institutions. This volume contains some scholarly essays, giving an insight into the state of our public institutions and naturally, its effects on governance.

Basically, the writers of these essays have dealt with the structural aspect of the institutions under survey. Some essays also emphasise the procedure adopted by these institutions in their functioning. Facts leading to the growth and decline of these institutions have, naturally, been elucidated where necessary. There are occasions when procedures will have to be brushed aside and constitutional duty will have to be performed independent of it in order to do justice to the purpose of the provisions. We find such an instance in the presidential order dated January 1, 2017, when President Pranab Mukherjee commuted the death sentences of four convicts without following the advice of the home ministry. Powers like pardoning are not strictly an Executive function. The advice of the ministers will weigh, but there would be cases wherein the constitutional functionary should exercise his own discretion according to his conscience.

Madhav Khosla and Anant Padmanabhan have rightly highlighted the legal developments that took place in the seventies. By inventing the doctrine of the Basic Structure, the Supreme Court circumscribed the power of parliament to amend the constitution. By a liberal reading of the Fundamental Rights in the light of the Preamble and the Directive Principles enshrined in the constitution, the Supreme Court gave a wider meaning to the Right to Life under Article 21. These are the two important contributions of the Supreme Court of which a proper note has been taken.

While dealing with the civil services, KP Krishnan and TV Somnathan have rightly pointed out the most important cause of their poor performance. According to them: “The biggest single weakness of the civil service today is its perceived inability to function with integrity and political neutrality. Political interference has become very common over the last three or four decades.”

The morale of public institutions is an indicator of the democratic functioning of the country as a whole. The Central Bureau of Investigation has already been a subject of public criticism and is often dubbed as a tool in the hands of people in power. Its highest officials have come under a cloud.

This, in contrast to contemporary happenings in the US, where the Department of Justice is able to appoint an independent counsel for an inquiry which might embarrass some persons in power, is sad. Political parties have no respect for institutions like the Comptroller and Auditor General and the Central Vigilance Commission. They praise them and underline their usefulness when these authorities for internal accountability exonerate them and criticise them when a finger is pointed at them.

Examples are cited of similar institutions in other countries where the government has a right to appoint judges to the highest court of that country. The right to appoint will not always be material. While making any appointment, if merit of the person to be appointed is the only criterion before the government, the problem does not arise. But what is important is what is the expectation of the state government after such an appointment? Should it be expected that the appointee should toe its line or be allowed to exercise his function independently?

An anecdote is quoted by Peter Irons in his book A People’s History of the Supreme Court. President Eisenhower of the United States was once asked if he had made any mistakes as President. “Yes, two”, he replied, “and they are both sitting on the Supreme Court.” The President was referring to Chief Justice Earl Warren and Justice William Brennan, Justices of the Supreme Court appointed by him but whose opinions were normally not to Eisenhower’s liking. 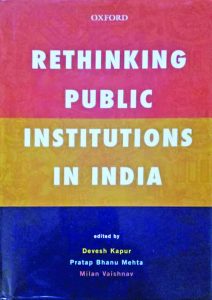