Indian Judiciary works tirelessly, henceforth, direction(s) provided by the courts, influence of the learned senior counsels, the solace brought by judgments on high profile crimes cannot be denied. The author of the book called “Electionomics” elaborated about the judiciary and democratic system of India.

The Author has done a commendable job in blending the Court Judgments, Law from the books, actions and inactions of the Election Commission, Statistics and events in the conversation between the Mythological Characters, the blind king of Hastinapur, Maharaja Dhritrashtra and his charioteer Sanjay. The King speaks and demonstrates the ancient thought process, whereas his charioteer Sanjay, who has the boon of divine eyesight, understands and expresses in the contemporary language. This conversation induces satirical tickling to the readers and brings out many revelations of the democratic system.

Furthermore, the Author has elaborated about the democratic system of India, wherein author deals with many modern scholars who felt that India democracy will not survive because of being civilized but it did since the constitution of India and Representation of the people act, 1951 are the law books fostering democracy. At last, the book leaves one spellbound with its simplicity, completeness, structure, legal nitty-gritties, statistics, and tussle of election commission, chicanery of politicians and dilemma of voters.

Opinion(s) of notable luminaries, over the said book,

Dr. Justice D.Y. Chandrachud, Hon’ble Judge, Supreme Court of India opined that the author has written on diverse aspects of law and society. The effort of the author in researching for this work deserves to be complimented.

Mr. Justice Dipak Misra, Former Chief Justice of India opined that the Arjuna was fortunate that he had the guidance of Lord Krishna but, as the author would suggest, present generation does not have a guide like Arjuna. There is no theorization in the Book. That’s the best part and I must congratulate author for the Principles to think as citizens.

Mr. Justice Siddharth Mridul, Hon’ble Judge, Delhi High Court opined that the said book is well written, well researched and well presented. And I am sure that this will become a go-to Book for those who would like to acquaint themselves with the process and the law on elections in India. It’s a wonderful book written by Author. Thank you dear author for lighting the way, it’s a path all of us can walk down.

Mr. Tusar Mehata, Solicitor General of India opined that there are several books on Election law giving judgments, statutory provisions, constitutional provisions but this it is a first book of its kind which has fusion of Mythology and core election law (Including Constitutional Law and statutory provisions and statistics) and is a book of creative value and so interesting that the reader is induced to read it. I had the privilege of reading the Book prior to its official or formal launch and therefore I had gone through the Book. 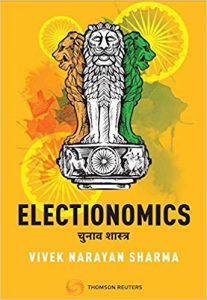