A Personal Army for Feudal Lords?

Aggrieved over the close links between the political class and the police, Chief Justice of India NV Ramana hit out at officers who wanted to be in the good books of the ruling party and misused the rule of law. 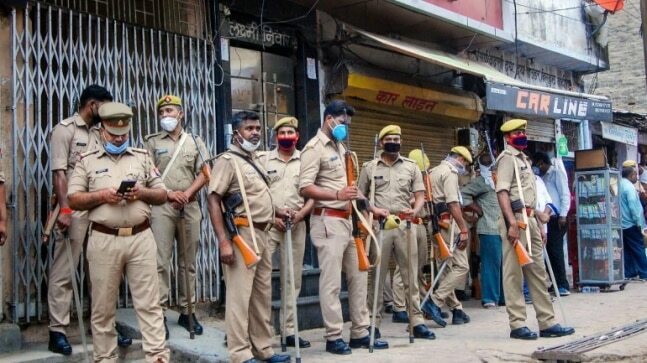 An IAS trainee posted as sub-divisional magistrate in Haryana commanded the police force on duty and told them to smash the heads of agitating farmers at Bastara in Karnal district. This is just a symptom of a chronic disease—politicians using the police force to suit their ends and the police bending over to please them in return for lure, postings, promotions and survival.

In addition, a commission looking into the Vikas Dubey encounter case of UP said recently that it was the police who should be held responsible for the trend. But besides the police, many other departments patronise and side with the powers that be, it said.

Illegal activities of politicians, such as mining, drugs, liquor cartels, transport, licences, real estate and industry subsidies cannot be carried out smoothly without the collusion of a willing police force.

The apex court observation about the police took place while hearing a petition of Gurjinder Pal Singh, a 1994 batch IPS officer, who had requested it to cancel FIRs charging him with corruption and conspiracy against the Chhattisgarh government. He alleged that the state’s Congress government was hounding him as he was seen to be close to the previous BJP-led administration. It’s not uncommon to find such cases in almost every set up in the country. It is no wonder that Shankar Sen, Director, Human Rights Commission of India, said that the police and politicians work with “bunker mentality” protecting one another.

India Legal spoke to a cross-section of judges, police officials, politicians and journalists for their views on this contentious topic:

The necessity of separation of powers in a polity was propounded long time back and read into our Constitution. The exercise of legislative, executive and judicial powers operates in separate orbits but what happens if the trajectory goes awry with the executive and the legislative wings colluding with each other, and the judiciary is a mute spectator? Rule of law would become the first casualty. If the law is not to become a tyrant, it would largely depend on the effective functioning of all the three wings autonomously.

The police being a part of the executive is expected to have a certain degree of autonomy, much like the judiciary and if compromised, it is likely to set in motion decadence which is incapable of reversal. Any institution survives on perception and if corroded, will erode the confidence of the people. It is men with flesh and blood who operate the system and their vices are likely to find reflection therein. Failure of these men to uphold the values expected of them would lead to loss of perception among the public. A police personnel is uniformed and identifiable and symbolises a dignified authority who can protect people, but if the perception gains ground that this authority buckles before the political class, then it will cause a dent in that image alone and none other because the political class is always viewed with scepticism.

The adage “who will police the police” implies that it is the institution and the men within who have to allay the apprehensions of the people. If they fail, then the blame rests squarely at the doors of the police itself. The recommendations of the Prakash Singh Committee and the directions of the Supreme Court in this regard need to be implemented if an effort has to be made to reform the police structure.

Once we acknowledge the necessity of reforms, it signifies that decay has set in and unless addressed, can lead to a collapse. The Supreme Court is, therefore, right in putting the onus on the police, for it is only they who have to rise to resist the unreasonableness of the political class, which wishes to use them as tools of oppression. One doesn’t have to go far to understand the semantics behind selective raids invoking draconian provisions of law. This destroys the harmonious balance that the rule of law seeks to enforce and converts law into a tyranny, and a democratic polity into a police state, which no one desires, except the ruling class which stands to gain from it.

Complicit policing is not new in the Indian scenario. The lure of money and political patronage has proved to be too tempting for the average police functionary. Being a yes man to an individual politician or displaying loyalty towards the ruling dispensation has become the norm now. The 2006 Prakash Singh judgement tried to insulate policing from politics but failed owing to stiff opposition from the political executive.

One way to translate the chief justice’s resolve to see police officers stick to the rule of law would be to galvanise local magistrates and judges into ensuring procedural integrity during various stages of investigations.

Ours is not a constitutional police but a colonial police. It is the duty of the police to adhere to constitutional values and up­hold the rule of law. They have no option but to discharge their functions in a free, fair and impartial manner. This is precisely the reason safeguards have been prescribed under Article 311 of the Constitution—to protect them against any arbitrary punishment. A functional democracy like India governed by the rule of law cannot afford its police behaving like the personal army of feudal lords. The law is the master of the police. The police should be held accountable for each act of omission and commission and be punished severely.

The police-politician nexus encompasses money and muscle power and has grown stronger over the decades. Policemen depend on politicians, right from recruitment to their postings later on as their careers progress. This vice like grip needs to be broken. The level of politics has reached the gutter-level. Politicians need the police to strengthen their control over voters, and money and muscle power come into play there.

In the eighties, political meddling in routine policing was limited to serving the chief minister’s crucial political interests like moving Jarnail Singh Bhindranwale safely out of Chando Kalan in Haryana in 1981 when the Punjab police was chasing him. Two decades later, this deteriorated to SPs seeking the chief minister’s directions on how far they should let protesters proceed towards their destination and how much force to use if needed. Now even cronies of powerful politicians are interfering. Misuse of the police to harass political opponents of ruling politicians too has followed a similar graph.

A criminal in a former political outfit becomes a saint in a new avatar if his defection has served the objectives for which he has been lured over. As a result, whether it is the judiciary, the executive or the media, all are witnessing constant erosion of moral values with upright, honest and rational people getting increasingly silenced. The nexus between politicians and each pillar of democracy has become stronger day by day.

Recently, I was astonished to read in the newspaper that 15 percent MPs and MLAs had been convicted in criminal cases in 2019-2021 and about 233 MPs and MLAs are muscle powered goons. The question that arises is: what should the police force do to deal with such elements?

The Supreme Court should ensure that the public is confident that the process of law is available to all equitably and special late night/ emergency hearings are open to all irrespective of the aggrieved party lawyer’s status be it Kapil Sibal, Abhishek Manu Singhvi or anyone else.

The Supreme Court’s observation should make all right-thinking people think of cleansing the malaise and breaking the unholy nexus between the ruling party dispensation and the police force at their command.

—The writer is a retired IPS officer of Haryana cadre and a practising advocate. He is also a columnist and a commentator