Articles 226 and 32 initiate a dual system of justice that is often counterproductive. This system was abolished in England in 1875, having proved to be counterproductive. Already established routes need to be used judiciously, instead of always opting for a shortcut, just because it exists. 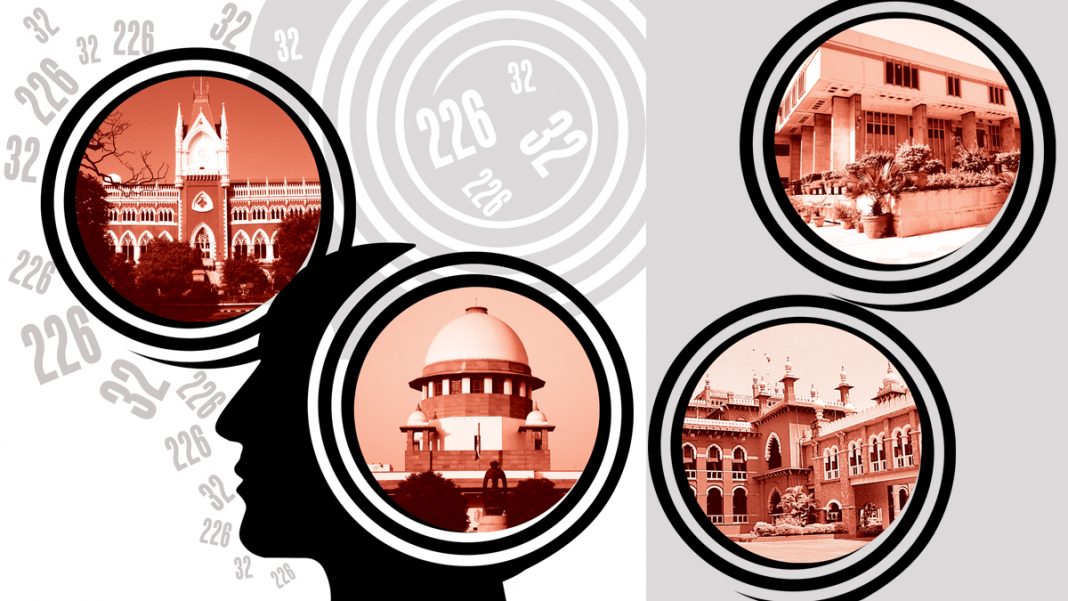 The perception of the common man on powers of the courts of the country in getting justice delivered seems a bit removed from ground realities. The common man is often reassured by news reports where the High Courts, under Article 226 (power of High Courts to issue certain writs) and even the Supreme Court under Article 32 (remedies for enforcement of rights conferred by this part) have come to the rescue of the commoner who has been denied justice by the government and its allied organisations. As they read news reports of people apparently being granted instant and hassle free justice, they, too, want to have writ petitions instituted when they face similar injustice.

There is a stellar example of the Kerala High Court, where relief under the writ jurisdiction is granted without being confronted by questions as to the maintainability of the petition for the petitioner not having exhausted the “alternative remedies”. Elsewhere, though, the reality differs from the commoner’s perception. In the High Courts of Bombay, Delhi, Madras, Punjab and Haryana and Gujarat, with which this writer is fairly familiar, the majority of the writ petitions are dismissed in limine (on the threshold itself) on the ground of non-exhaustion of alternative remedy.

In the backdrop of such a reality, this writer has often found lawyers, instead of advising their client to institute a civil suit, challenge the order of the High Court in the Supreme Court under Article 136 (Special leave to appeal by the Supreme Court) instead. One may point out that the Civil Court, as the court of plenary jurisdiction, is competent, empowered and duty bound to adjudicate any dispute under the sun of a civil nature, unless barred, or where forums like the DRT, NCLT, Provident Fund Tribunal, etc. have been created in substitution of the Civil Court.

What happens is that these ill-advised SLPs are dismissed by one-line orders. In the process, this exercise would have cost the litigant enormously, and many simply give up their pursuit for justice. The few who have still kept their hopes in the judiciary, then would have to institute a suit or approach the forum created in substitution of the Civil Court.

What happens next is that their plea for interim injunction or other protective orders are rejected on the premise that their plea before the High Court and the Supreme Court was lost. The fact that the High Court or the Supreme Court did not adjudicate the case and, therefore, there is no case res judicata (a matter that has been adjudicated by a competent court and therefore may not be pursued further by the same parties) or estoppel (the principle which precludes a person from asserting something contrary to what is implied by a previous action or statement of that person or by a previous pertinent judicial determination) is lost sight of.

In some cases, the judgment of the High Court dismissing the plea for want of maintainability is voluminous, giving the impression that the Court has decided the case on its merits. Often a very meritorious case can, thus, be lost solely because the litigant had an “alternative remedy” which he had not exhausted before he approached the High Court.

Most lawyers would advise the litigant to invoke Article 226, because it is a common practice to file writ petitions involving disputed questions of fact. Invariably, in all cases, a suit will lie and where a suit will not lie, an action will lie before the tribunal/forum created in substitution of the Civil Court. A situation where instead of a writ, no suit will lie or an action will not lie in a tribunal/forum created in substitution of the Civil Court does not exist. This availability of option is always there, but sometimes even litigants insist that a writ be filed instead of instituting a suit or appropriate proceedings in the tribunal or forum.

Why do they do that? This is because of a misconception created in the minds of the common man that the sky is the limit of the jurisdiction of the High Court under Article 226 and that the long arm of justice will reach out to remove injustice wherever it is. But the reality is different. Most often, the judges on their own dismiss petitions in liminie, namely, without issuing notice to the opposite party, on the ground of non-exhaustion of “alternative remedy”. In other cases, it is dismissed when the opposite party raises the plea of non-exhaustion of the alternate remedy.

Sometimes an additional plea that no writ will lie, because the respondent is not a state or its instrumentality, is raised. In short, justice is denied because the litigant had approached the wrong forum, taking us back to the pre-1875 era where a common law court would decline injunction, specific performance, etc., because such remedy could be sought in the Chancery Court and where a Court of Equity would deny damages because such remedies would lie only in the common law courts.

As mentioned before, it is difficult to imagine a case for which where there does not exist an alternate forum, often incorrectly termed as remedy. Therefore, whether to admit a writ petition or grant relief, despite the existence of an “alternative remedy” falls under the discretion of the judge. And the unsavoury truth is that except in cases where the litigants are represented by lawyers who enjoy great “face value”, writ petitions are dismissed almost mercilessly on the ground that the party has an “equally efficacious alternative remedy”. Sometimes the respondent is not a state or instrumentality of the state and, therefore, no writ will lie.

The net outcome is that, except in a few cases where the writ petitions are entertained and relief is granted, in a majority of cases—at least in the major High Courts which face a great influx of petitions—the litigant who had approached the Court placing unstinted faith in it, is denied justice. This denial of justice to individual litigants remains as their personal grief. Unlike governmental decisions which affect the public at large, where any injustice would lead to protest, the injustice at the hands of the judiciary remains to be the sorrow of individual litigants. Article 226 has unwittingly become an instrument of denial of justice. It is not clear how many lawyers or judges have noticed this unfortunate truth.

The terms “forum” and “remedy” are well defined in law. Forum means the court or tribunal where an aggrieved party can seek justice and enforce the remedies the law will provide him where his rights are infringed. The word “remedy” in juris­prudence would mean common law, equitable and declaratory remedies.

Having gone through a large number of judgments from the 1950s till date, one finds that most, in categorical terms, declare that the jurisdiction under Article 226 is equitable and discretionary, and that the existence of an efficacious alternative remedy would be a ground for declining the jurisdiction. Invariably, all—even the most eminent of judges—have used the terminology “alternative remedy”, while what they have meant is an alternative forum, a civil court or a tribunal, where the writ petitioner could have instituted a suit or initiated an action.

To understand this one needs to trace the English legal history. The Chancery jurisdiction, nay the Chancery Court came into existence as a parallel system of administration of justice, particularly since the 16th century because the common law courts were too bound by precedents and procedures, leading to people complaining to the king. Initially, the king personally heard their grievances and interfered with the decrees of the common law courts. The king himself deciding was disapproved. Chief Justice Coke, quoting Bracton, asserted that the king is under no man, but under God and the law. In the turf war between the common law courts and the chancery courts, the latter gained predominance.

It was said that the Chancellor shall not know the common law, and was not bound by its procedures. The Chancellor was often a bishop who decided based on the concepts of justice, equity and good conscience. The Chancellor gave reliefs like injunction, specific performance, set off, counter claim, etc. Its procedures were simple: no specific relief was even required to be sought. The Chancellor could mould the reliefs. The two streams of justice administration ran parallel without its waters ever getting mixed.

Parliamentarians/reformers like Bentham believed that two systems of courts is counterproductive and would lead to injustice and delay. As a result of their efforts, the Common Law Procedure Act of 1854 and the Chancery Amendment Act of 1958 were enacted and as a result thereof, the court of equity could grant the remedies which common law courts alone could have granted and vice versa.

The Judicature Acts of 1873-5 brought an end to the dual system. Thereafter, there remained only one stream of administration of justice which could grant all remedies, common law, equitable and declaratory. Even before the two systems were fused into one in England, by virtue of the Code of Civil Procedure of 1859, one single system of administration of justice came to be introduced for the dominion of India. However, there was an aberration.

The Supreme Courts of Calcutta, Madras and Bombay were established in the years 1774, 1800 and 1823, respectively. The Supreme Courts were vested of jurisdiction akin to the king’s bench in England, namely, empowered to issue various writs like certiorari, quo warranto, etc. In England, the High Courts, namely, the Chancery courts, Kings bench, etc. vested of civil jurisdiction, capable of granting common law, equitable and declaratory remedies was established only in 1875 by the Judicature Acts of 1873 and 1875. However, in India, with the enactment of the Code of Civil Procedure of 1859, the Civil Courts came to be vested of the jurisdiction to grant common law, equitable and declaratory remedies, all.

However, few possibly realised that to enact Articles 226 and 32 would mean to reintroduce the dual stream of justice which was abolished by the Judicature Act of 1875 in England, it having been found to be counter-productive. Nobody then, ever thought that it would lead to forum shopping, in as much as that it is open to a litigant, to decide for himself, whether to institute a suit, often in a subordinate Civil Court, or to institute a writ in the High Court, or that a wealthy litigant would engage a lawyer who manifestly commands greater “face value”.

The founding fathers cannot be blamed for that, for it is humanly impossible to foresee everything about the future.

—The writer is a lawyer practising in the Bombay High Court, both on the original and appellate side

Did you find apk for android? You can find new Free Android Games and apps.
Share
Facebook
Twitter
Pinterest
WhatsApp
Previous articleIn-depth: Deepika Padukone, a profile of the actor and her highs in a sparkling career
Next articleHow to Buy Ethereum: Instructions