India will soon start a bad bank to deal with stressed assets in the banking system. But if it is incapable of preserving a healthy balance between assets and liabilities, it will be a disastrous move. 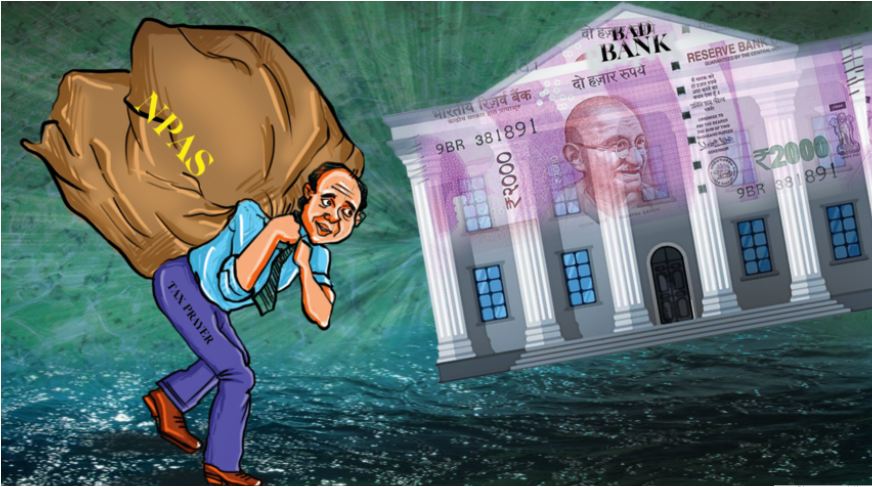 In November 2021, Finance Minister Nirmala Sitharaman had declared the creation of India’s first-ever “Bad Bank”. Now in January 2022, the RBI has finally given the bad bank the green signal. Many banks had experienced a progressive increase in their loans’ portfolio since the international financial disaster of 2008-2009. In India, since 2016, the level of non-performing assets (NPAs) or bad loans had climbed steeply. Largely, this was because the RBI wants banks to precisely identify the bad loans and record them in their books of accounts. Thus, there is now no probability of receiving payment of that amount and banks must make provision for the sick days ahead.

Moreover, the troublesome fact is that a vast share of NPAs is with the public sector banks (PSBs), which are managed by the government. The government must recapitalise them to keep them in business. To do this, the government has no option but to use the taxpayers’ money to improve the financial health of PSBs so that they can carry out the function of advancing and financing economic activity. Therefore, due to the increase in NPAs, talks of establishing a bad bank gained momentum.

To solve the mega problem of NPAs, the National Asset Reconstruction Company Limited (NARCL) has already been incorporated under the Companies Act and India Debt Resolution Company Limited (IDRCL). The NARCL will procure strained assets worth approximately Rs 2 lakh crore from different commercial banks in various stages while the IDRCL will attempt to dispose of the strained assets in the market. However, ultimate approvals and ownership for the resolution shall lie with NARCL as the principal. The state-owned banks hold a bulk share in NARCL while private-sector banks possess a majority stake in the IDRCL. The previous composition—an asset reconstruction company (ARC) working in tandem with an asset management company (AMC) was stated in the Union Budget for 2021-22, but the regulator had shown its reluctance.

So what is a bad bank? It is an organisation that acquires all the NPAs of a bank at a price that is below its book price. It then works to recuperate and turn around the assets by way of expert management, sale or restructuring. The sellers of these bad credits can clear their balance sheets and hold only the good assets after cancelling the bad ones. The main advantage of forming a bad bank is asset monetisation. Bad assets will remain the risky zone, while the good ones stay in the other category, saving them from mixing. With this, investors are confident of its fiscal health and could pour in more funds.

The US, Malaysia, Ireland, Nigeria, Sweden and Finland have used bad banks to put an end to their financial crisis. A noticeable instance of a bad bank is Portugal’s Novo Banco. Novo Banco was started by the government of Portugal in August 2014 as part of a rescue of the dwindling Banco Espirito Santo BES. BES was split into a good bank covering its good assets and a bad bank (Novo Banco), comprising all the difficult to recover loans. One more illustration is Grant Street National Bank. This institution was established in 1988 to accommodate the bad assets of Mellon Bank. In January 2017, the idea of setting up a bad bank attained popularity in India when then RBI deputy governor Viral Acharya recommended two models—Private Asset Management Company and the National Asset Management Company to resolve the concerns of strained assets.

According to the chairman of SBI, Dinesh Kumar Khara, the asset resolution will be implemented in a phased style. Already, a total of 38 accounts totalling Rs 82,845 crore have been recognised for transfer to NARCL. In the first stage, a minimum of 15 accounts worth Rs 50,335 crore will be transferred to the intended bad bank by March 31, 2022. Although an assessed Rs 2 lakh crore worth of bad assets was planned to be transferred, some of these accounts have already been settled and additional resolutions will happen as and when they are referred to the bad bank. The SBI also mentioned in a press statement that the IDRCL is expected to bring in superior resolution techniques, preserve the value, showcase brownfield assets, attract national as well as overseas investors and Alternate Investment Funds, which will free up capital for further bank advancing.

The NARCL will acquire bad loans through a 15:85 structure, where it will disburse 15% of the sale consideration in cash and issue security receipts (SRs) for the remaining 85%. The SRs will be guaranteed by the government. The government guarantee will fundamentally cover the gulf between the face value of the SRs and the realised worth of the assets when finally sold to the potential purchasers. The government has favoured a five-year guarantee of up to Rs 30,600 crore for SRs to be distributed by NARCL as non-cash consideration on the transfer of NPAs. This will address banks or RBI concerns about incremental provisioning.

As India gets ready to operationalise a bad bank, China is struggling with one of its biggest bad banks, the China Huarong Asset Management Co. Ltd. (Huarong). The Hong Kong-listed company, which counts the Chinese government as a chief stakeholder, recently stoked financial stability worries when it skirted a potential bond default. Therefore, the Chinese experience should inform Indian policy thinking on bad banks.

The Chinese experience holds four important lessons for India. First, a centralised bad bank like NARCL should ideally have a finite tenure. Such an institution is typically a swift response to an abrupt economic shock and has a temporary purpose, and need not exist in perpetuity. Second, a bad bank must have a precise, thin directive with unambiguously outlined goals. Transferring NPAs to a bad bank is not a remedy in itself. There must be a clear resolution plan. Third, in a steady state, the resolution of bad loans should happen through a market mechanism and not through a multitude of bad banks.

Now the question is whether the idea of a bad bank will help solve the mega problem of NPAs. From the viewpoint of a bank burdened with extreme NPA levels, it will help. The bad bank will assist the banks to erase all its lethal assets which were damaging their profitability in one quick attempt. Additionally, the bank’s position will develop when the recovery money is paid back. The NARCL will be assessed on how rapidly and efficiently it can settle the stressed assets that it takes over. That will depend on what type of conditions it is capable of providing to the banks whose NPAs it is procuring.

However, from the viewpoint of the government and the taxpayer, the scenario is more confused because whether it is recapitalising PSBs loaded with bad loans or providing guarantees for security receipts, the funds are coming from the taxpayers’ pocket. Such actions of the government are habitually termed as “reforms”. The only justifiable remedy is to develop the advancing operation in PSBs. Importantly, the strategy of bailing out banks will crumble if the bad bank cannot sell such diminished assets in the market. If that occurs, guess who will have to bail out the bad bank itself? Indeed, the taxpayer.

Now a bad bank is on the pathway and the fundamental job before the government is to guarantee that it attains a reasonable level of success in accomplishing the duty allocated. If a bad bank turns out to be a problematic establishment that is incapable of preserving a healthy balance between its assets and liabilities, it will be extremely disastrous. The government must implement measures to ensure that the governing system permits a bad bank to carry out its tasks with rapidity and at a manageable cost to itself. Then only the bad bank will become a successful venture.

The government has chosen the first move towards this by introducing the Insolvency and Bankruptcy Code (IBC) which aims to resolve the problems of NPAs. Up to now, it has done well but there are miles to go. The resolution procedures should be condensed and it has to assure that appeals to higher authorities are not employed as an adjourning trick by the accused parties. The government should immediately fill the many positions on the tribunals that are the medium for the resolution procedure to be carried out.

The people who will manage the bad bank should be autonomous experts so that they can perform a good job of locating buyers with some logic and not at throwaway prices. The concept of the bad bank should not become a case of old wine in a new bottle. It is also crucial that the bank be capable of retrieving efficient resolution professionals who are already aiding the IBC process.

As a final point, the government should have a clear notion that a bad bank once established, should not go on endlessly. The global experience is that a bank is established after a financial system becomes laden with NPAs. It brings in remarkable macroeconomic changes, then it does its job with some achievement and subsequently, it is wound up. Also, the government must alter the manner it manages the financial institutions or banks it possesses. If huge credits are granted on the basis of phone calls from politicians and civil servants whose gestures senior managers follow for the good of their careers, then there will be no faith.