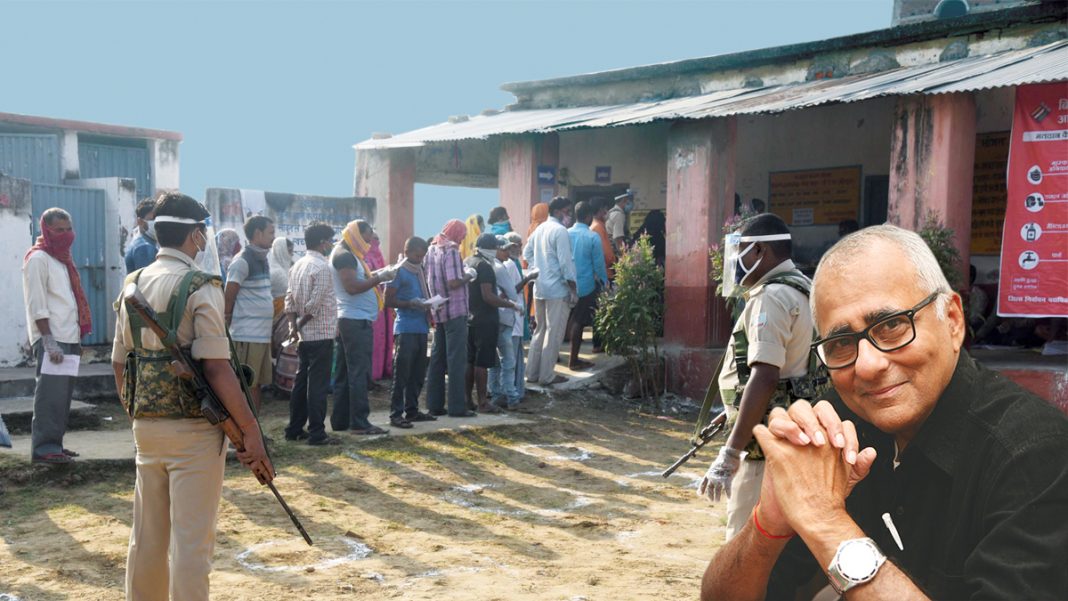 In an extraordinarily timely story, this week’s India Legal returns once again to the subject of criminals in politics. This subject has been discussed ad nauseam for decades. Recommendations are made, detailed reports such as that of the NN Vohra Committee are circulated and legislative remedies are proposed to ensure that people with criminal records and backgrounds are kept out of the nation’s electoral politics, but the more things appear to change, the more they remain the same. After the tut-tutting and hand-wringing cease, it’s back to familiar turf.

Nothing illustrates this point better than the fact that despite the Supreme Court order on criminal candidates, Bihar’s Phase 1 elections on October 28 alone saw 328 candidates contesting with tainted, murky records. Despite the new election protocols dictated by the coronavirus pandemic, Bihar’s “notorious and perennial problem of legislators with criminal records continues”, writes correspondent Sambhav Sharma.

These figures have emerged in the joint report of the Bihar Election Watch (BEW) and the Association for Democratic Reforms (ADR). Of the 328 candidates with criminal records, the Rashtriya Janata Dal (RJD) has the highest number of 30, the BJP has 21, the Lok Janshakti Party (LJP) has 24, the Congress has 12, the Janata Dal (United) has 15 and the Bahujan Samaj Party (BSP) has eight.

It is again moot to note that just this February, the Supreme Court directed political parties to state reasons for the selection of candidates with pending criminal cases by posting them on their websites. The bench of Justices RF Nariman and S Ravindra Bhat asked the parties to also list why they could not select other candidates without criminal antecedents.

The judgment (Rambabu Singh Thakur versus Sunil Arora {Chief Election Commissioner} & Ors.) said if a political party fails to comply with the order’s directions, it would be seen as being in contempt. While this was expected to demotivate candidates with a criminal background from entering the fray, the data from BEW-ADR above indicates that it has not stopped the malpractice. The ball, as directed by the Supreme Court’s February 2020 order, is very clearly in the Election Commission’s court.

Sambhav Sharma spoke with several senior officials including former Chief Election Commissioner TS Krishnamurthy. The latter opined that making voters aware of candidates with criminal antecedents has its limitations. He said most leaders with criminal records enjoy judicial delays which have an adverse impact on democracy. “Such people continue to use their muscle power to overrule the voice of the people. Political parties seem to be less serious about it,” he said. Here are some salient features from Sambhav Sharma’s report that merit attention:

Justice Nariman, who wrote the judgment, was brutally frank in his assessment and analysis. He wrote: Over the last four general elections there has been an alarming increase in criminals in politics. In 2004, 24 percent of the members of Parliament had criminal cases pending against them; in 2009 that went up to 30 percent; in 2014 to 34 percent; and in 2019 as many as 43 percent of MPs had criminal cases pending against them.

He referred to an earlier Constitution Bench judgment (Public Interest Foundation vs Union of India) in which “this Court was cognisant of the increasing criminalisation of politics in India and the lack of information about such criminalisation amongst the citizenry.

In order to remedy this information gap, the Court issued the following directions:

“Keeping the aforesaid in view, we think it appropriate to issue the following directions which are in accord with the decisions of this Court: 1. Each contesting candidate shall fill up the form as provided by the Election Commission and the form must contain all the particulars as required therein. 2. It shall state, in bold letters, with regard to the criminal cases pending against the candidate. 3. If a candidate is contesting an election on the ticket of a particular party, he/she is required to inform the party about the criminal cases pending against him/her. 4. The political party concerned shall be obligated to put up on its website the aforesaid information pertaining to candidates having criminal antecedents. 5. The candidate as well as the political party concerned shall issue a declaration in the widely circulated newspapers in the locality about the antecedents of the candidate and also give wide publicity in the electronic media. When we say wide publicity, we mean that the same shall be done at least thrice after filing of the nomination papers.”

Justice Nariman, in the February judgment remarked: “We have also noted that the political parties offer no explanation as to why candidates with pending criminal cases are selected as candidates in the first place. We therefore issue the following directions in exercise of our constitutional powers under Articles 129 and 142 of the Constitution of India:

“1) It shall be mandatory for political parties [at the Central and State election level] to upload on their website detailed information regarding individuals with pending criminal cases (including the nature of the offences, and relevant particulars such as whether charges have been framed, the concerned Court, the case number etc.) who have been selected as candidates, along with the reasons for such selection, as also as to why other individuals without criminal antecedents could not be selected as candidates.

“2) The reasons as to selection shall be with reference to the qualifications, achievements and merit of the candidate concerned, and not mere ‘winna­bility’ at the polls.

“3) This information shall also be published in: (a) One local vernacular newspaper and one national newspaper; (b) On the official social media platforms of the political party, including Facebook & Twitter.

“4) These details shall be published within 48 hours of the selection of the candidate or not less than two weeks before the first date for filing of nominations, whichever is earlier.

“5) The political party concerned shall then submit a report of compliance with these directions with the Election Commission within 72 hours of the selection of the said candidate.

“6) If a political party fails to submit such compliance report with the Election Commission, the Election Commission shall bring such non-compliance by the political party concerned to the notice of the Supreme Court as being in contempt of this Court’s orders/ directions.” Have any of the directions issued earlier by the Constitution bench and then reinforced by the February judgment been followed or implemented before and during the Bihar assembly elections? If not, then the officials responsible will have to answer to the highest court of this land for contempt. If guilty, they should not be let off with a one-rupee token fine.