The emergence of new variants has made vaccination and Covid-appropriate behaviour all the more imperative. The second wave will be more transmissible than the first, but may not last long. 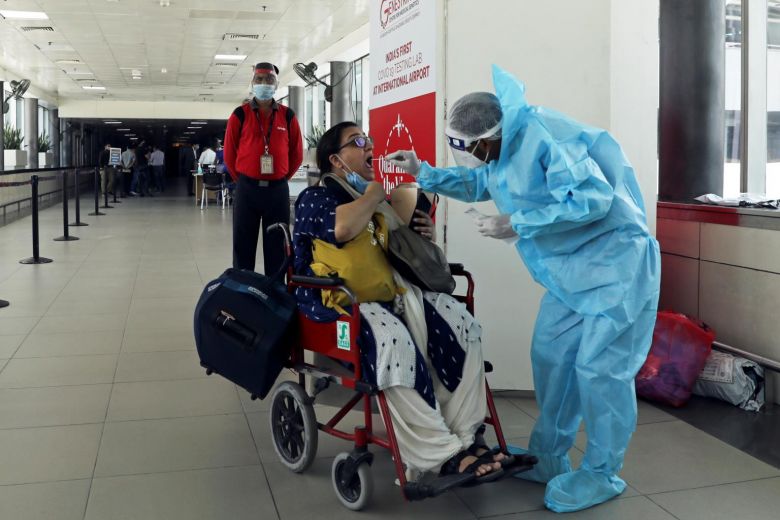 It has been more than a year that a country wide lockdown was imposed. After a brief respite in early February 2021 when the number of new cases had significantly come down, there is again a sharp spike in infections. The numbers are escalating at an alarming pace. India is facing a second wave of the Covid-19 pandemic. The wave is stronger, earlier and likely to cross the first wave in numbers, but is expected to have half the mortality.

Genome sequencing has revealed a new “double mutant” variant of the coronavirus in Maharashtra, in addition to other “variants of concern” that have been found outside India. About 795 cases of the UK, South Africa and Brazil variants of the SARS-CoV-2 virus have been detected in the country. But the new double mutant strain has been detected in only 206 samples, whereas 700 samples sequenced in Maharashtra have shown the UK variant; in Punjab too, 81% of samples (326 out of 401 samples) collected between February 1 and March 10 tested positive for the UK strain, making it the dominant strain in the state. In Delhi, 75 samples have shown the presence of the UK variant.

The mutations have also altered the presentation of the infection. Besides the routine clinical presentation of Covid-19, newer patients are younger and in Bengaluru, even younger than 10 years. While the new double mutant variant is a cause for concern, it is not likely to be a cause for panic.

The double mutant variant carries the E484Q and L452R mutations in the receptor-binding motif (RBM) part of the spike protein of the SARS-CoV-2 virus. These are substitution mutations and the E484Q mutation resembles the South Africa and Brazil strains, while the L452R mutation is comparable to the California strain. Since these mutations are in the RBM, they are more contagious. No deletion mutation has been detected. So it will spread very rapidly and cause a spurt in the number of cases, but may remain localised and not spread globally. Testing, tracking, isolation and treatment remain the mainstay of management for the new variant/s and are similar to the strategy adopted for the currently circulating strains of the virus.

The original virus from Wuhan was soon replaced by a new variant called D614G; it began spreading in Europe in early February and has now become the dominant strain worldwide. More new strains emerged later: the UK strain (B.1.1.7), South Africa strain (B.1.351) and the Brazil (P.1) strain.

These three variants have been labelled as “variants of concern” due to evidence of increased transmissibility and potential for more severe disease and reduced effectiveness of vaccines or other treatments. The UK strain has spread to more than 70 countries and is 30-70% more lethal than the original wild-type strains. It is associated with an increased risk of death compared to other variants. It also affects the younger age group.

In India, the N440K has been detected in Andhra Pradesh, Karnataka, Maharashtra and Telangana. It has also been reported from 16 other countries, including the UK, Denmark, Singapore, Japan and Australia. Two more mutations–C1240Y and P84T–have been seen in Kerala.

A faster-spreading new mutation may be one reason for the acceleration in the number of Covid-19 cases. Non-adherence to Covid-appropriate behaviour has also been cited as a key driver of the second wave. After a year of restrictions, a sense of fatigue has crept in and people are becoming complacent. Life seems to be back on track.

Given the highly infectious nature of the new variants, all of us should strictly adhere to Covid-appropriate behaviour such as:

·       Correct consistent and continuous use of face masks

Viruses keep on mutating as they spread from one person to another. RNA viruses undergo mutations more commonly than DNA viruses. The SARS-CoV-2 virus is an RNA virus. Some mutations may persist and become “variants of interest” or “variants of concern”, while others may die out. Some mutations make the virus more transmissible so that it spreads more easily and more rapidly. The resulting increase in the number of infected persons strains the already overwhelmed public health measures in place to control an outbreak.

Variants initially do not come under control, but in due course, the attack rate comes down. The second wave will be faster and stronger than the first wave, but may not last long.

The SARS-CoV-2 is a new virus and it has only been a year since it was first identified. We do not know how it will evolve in future, but it is very likely that it will mutate again. Will the new variants make the vaccine less effective? We do not know yet. But this is the right time to take the vaccine. Everyone eligible to take the vaccine must take it because only then can we hope to break the chain of infection transmission. Speeding up vaccination is the answer before the virus mutates further.

Did you find apk for android? You can find new Free Android Games and apps.
Share
Facebook
Twitter
Pinterest
WhatsApp
Previous articleUttarakhand HC directs State to maintain status quo on Shailesh Matiyani award for 2018, seeks reply in 4 weeks
Next articleJustice Surinder Singh Nijjar: A star of the bar and bench