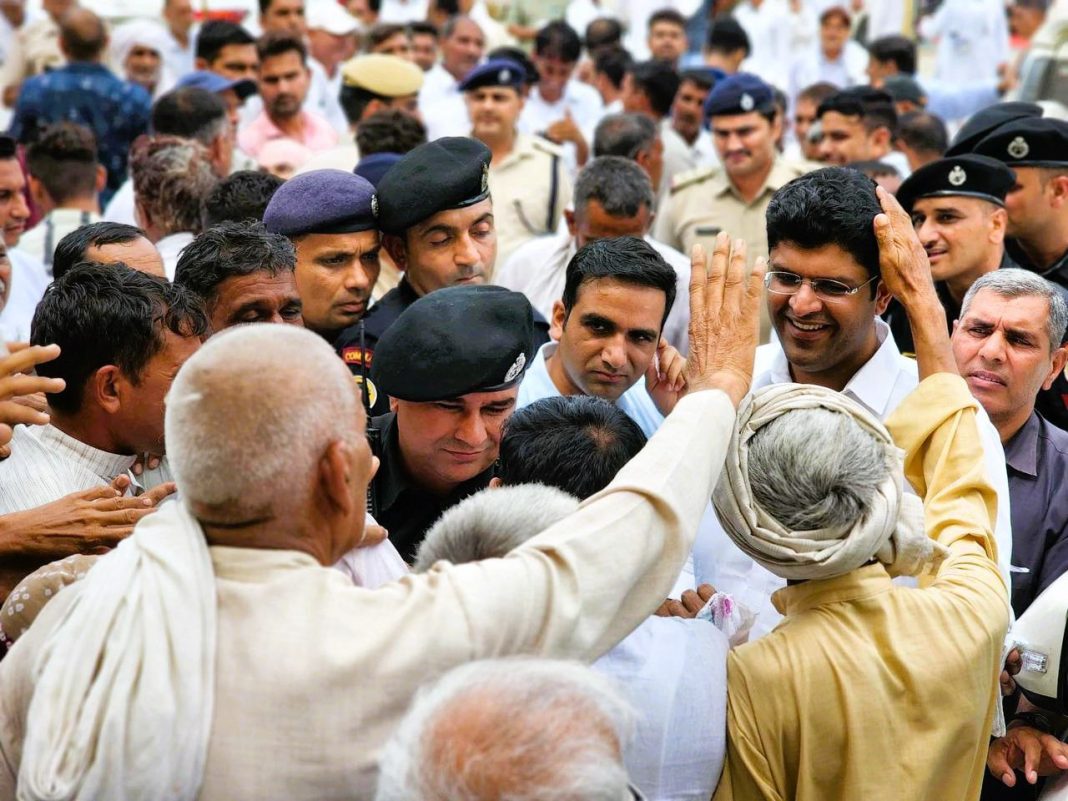 Dushyant Chautala, popularly known as the people’s Deputy CM, emerged tall after the astonishing debut of his political party in 2019, securing 18% votes with 10 legislators and consequently became a king-maker in the formation of the government in Haryana. Many thought he had achieved his goal but for Chautala, it was just a beginning.

The political journey of the youth icon-turned-politician has indeed been meteoric.

In 2014, Parliament witnessed the arrival of its youngest-ever member who defeated heavyweight Kuldeep Bishnoi (several term MP and son of former Haryana CM Bhajan Lal) from Hisar Lok Sabha constituency. At 25, he became the youngest member of Parliament not only in India but in the whole of Asia.

While Dushyant Chautala was learning the dynamics of national politics in Parliament, he was strengthening the student wing of his party, the Indian National Student Organization (INSO) too. It was under his initiative that in those times, the largest blood donation and tree plantation drives were taken up by the youth of Haryana. While his father Ajay Chautala was imprisoned in a job scam which he says was a conspiracy of state congress leaders, Dushyant along with his uncle Abhay Chautala was looking after the INLD. His personal style of functioning was different from his uncle whose arrogance and association with musclemen was not liked by Dushyant. Apart from this, Dushyant’s acceptance among the masses and his rising popularity became a worrying factor for his uncle and his two sons.

Dushyant, along with his brother Digvijay Chautala and mother Naina Chautala, MLA from Dabwali, were expelled from INLD in 2018, just 11 months before scheduled state elections. Dushyant wasted no time and rather than contesting the ownership of INLD, he formed his own party, the Jannayak Janta Party (JJP). This decision surprised many state leaders who termed it as a “move of a novice” and outfit of a “bunch of boys” but Dushyant could see what no one else could.

In that year, the JJP won 10 seats in the Assembly and ate into heavyweight candidates’ constituency in Haryana, making it the king-maker in the state.
Dushyant cobbled a coalition with the BJP and became Deputy CM taking charge of 10 important ministries. In all, JJP bagged the post of Deputy CM, a cabinet minister and one state minister. The Deputy CM kothi in Chandigarh became Janta Darbar Kothi where people from various parts of Haryana come and meet Dushyant directly. This darbar keeps his Z-category security personnel on their toes but Dushyant remains among his people, making the security forces’ job difficult.

Dushyant travels extensively through all the districts of Haryana talking to, shaking hands with and mingling with people, emulating the trademark style of his great grandfather Tau Devi Lal, former Deputy Prime Minister of India. Recently, while touring Hisar District his convoy was stopped by farmers as they faced the problem of waterlogged fields and possible damage to crops due to rains. Dushyant acted swiftly and directed local SDM who was with him in his protocol to immediately visit the spot and resolve the issue. He sensed the urgency and magnitude of the problem and the same evening, senior officials of irrigation department, Deputy Commissioner, Superintendent of Police and other officials were summoned for emergency meeting at his Hisar residence. Emergency fund was released for purchasing of equipment and the matter was resolved the very next day.

A born leader, Dushyant’s rise in 8 years is a story to tell and as he says, “The woods are lovely, dark and deep. But I have promises to keep, and miles to go before I sleep.”

Did you find apk for android? You can find new Free Android Games and apps.
Share
Facebook
Twitter
Pinterest
WhatsApp
Previous articleSupreme Court reduces the term of an old illiterate rural woman who was in possession of Cannabis
Next articleWoman moves Delhi High Court to stop friend from going to Europe for euthanasia