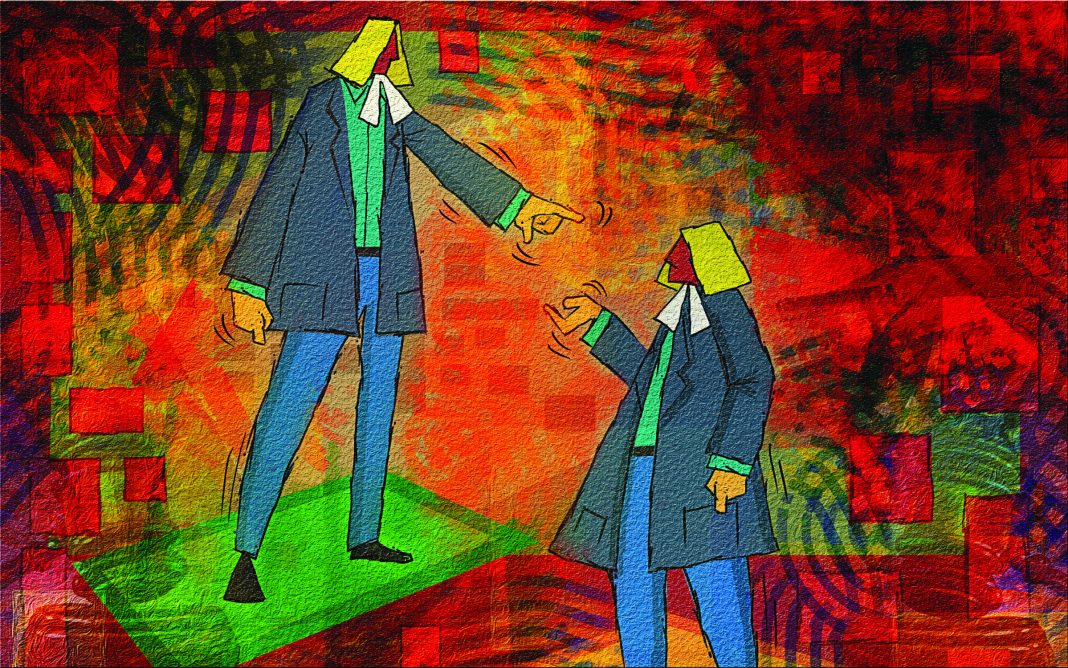 Dr Lokendra Malik in his recent article, “A Feudal Mindset”, gives a very detailed overview of Justice Dr DY Chandrachud’s speech at a conference on Mediation and Information Technology, organised by the High Court of Gujarat. Here, Justice Chandrachud said: “We all know Indian judiciary even today is essentially feudal. These feudal practices are evident to us by the element of subordination between practice amongst judges of the district judiciary judges being made to wait when a judge of the higher court is coming to the district, at the border of it. Judges of the district judiciary are not allowed to sit when they talk to High Court judges or even higher. These are some of the symbols of the subordination of the district judiciary.” Malik also referred to the views recently expressed by Professor Upendra Baxi and Justice Sanjib Banerjee on the subject of judicial feudalism. This article may be considered an extension to what Malik has very ably written.

Calling the judicial system feudal may sound too sweeping a statement, but it shows the judge’s extreme anguish at the state of affairs. Is the judiciary really feudal, across the length and breadth of India, from the metropolitan cities to the small towns, and the over six lakh villages where 840 million people live and real poverty resides? Or only a negligible number of members of the judiciary display some feudal tendencies, while most are well trained and well educated, modern in approach, rational in thinking and balanced in their views? And in those who are intrinsically feudal, is feudalism a part of their genetic make up which has robbed them of republican and secular values? Did such judges learn feudal ways while growing up, which even their training did not make them shed? How is it that a feudal mindset went undetected during the recruitment process, instead of getting identified and eliminated?

In the context of the judiciary, feudalism may be defined as the tendency of the judge to be arrogant, self-centered and haughty, who unceremoniously orders people without showing respect and concern for human dignity. And while judging a cause, he has pre-conceived notions and is not open to conviction because the feudal mind is closed. But the feudal judge always shows utmost subservience, servility and obedience to people above his rank.

Our republican Constitution is admired worldwide. Open the Constitution, its illustrations bring out our mythology, heritage and culture, making it a balanced mix of tradition and modern constitutional thought. This is what we gave to ourselves in 1950. We can be forgiven to overlook that in not such a remote past, we had allowed the British Emperor to rule over us, his British-Indian subjects, since 1858, and impose upon us laws passed by the British Parliament. But the Emperor’s subjects did not include about 560 big and small princely states and estates, covering nearly a quarter of the Indian population. The states had their own rulers and subjects, their own feudal system of justice, which functioned outside the jurisdiction of the High Courts of Madras, Bombay, Calcutta, Allahabad, Mysore, Patna, Assam and Lahore (included here because it extended up to New Delhi and beyond).

Before 1858, India was under the rule of the East India Company whose first ship docked at Surat for spice trade in 1608, during the reign of Jehangir. The company slowly expanded its business and also acquired a vast army. The turning point came when the company under Robert Clive defeated Siraj-ud-Daula, the Governor of Bengal at Plassey in June 1757. This was followed by taking over the governance (Diwani) of Bengal from Shah Alam 15 years later. Finally, the Company’s forces defeated Bahadur Shah in 1857, to take over the entire Mughal Empire. The Mughal dynasty had been ruling over large parts of India since Babur’s invasion in 1526. But princely India had always managed to negotiate treaties with the central power, first with the Mughals, then with the Marathas and finally with the E.I. Company.

Earlier, our society was stratified into a strict system of caste which was neither egalitarian nor democratic, but may have helped to maintain peace, defeat the enemies and give prosperity to the people. The four castes were the four limbs of the feudal order: administration, military, commerce and labour. Should one cavil against such feudalism because a benevolent king would be considered a good king, brave, popular and loved? But it is no surprise that one of the lasting outcomes of feudalism has been our deeply entrenched caste system, which has nurtured a deep feudal conservatism. No discussion on feudalism in judiciary can be complete without a brief overview of the above historical and social background.

The district judiciary carries the burden of first instance litigation, which is essentially civil and criminal. The High Courts and the Supreme Court step in only at the appellate or revision stage or when constitutional jurisdiction is invoked. The distribution of jurisdictions must be properly understood by the ministers of law and justice, for improvement of the district judiciary.

The plaintiff in a civil case is asking for return of his money or land and also a quick decision, one way or the other. The plaintiff feels the preponderance of evidence favours him. The accused in a criminal case is asking for acquittal because he feels he is innocent as the charges against him cannot be established beyond reasonable doubt. There is a third category of cases where the judge requires clear and convincing evidence before giving his verdict in favour of the applicant.

The subordinate courts are day-in and day-out engaged in this gigantic intellectual exercise from 9 am to 5 pm. Is there a preponderance of evidence in favour of the plaintiff? Is the evidence led by the prosecution sufficient to record conviction? Has the applicant produced clear and convincing evidence to get an order in his favour? Within these parameters, it is the duty of the head of judiciary to streamline the system.

Technology can improve the basic day-to-day business of judging. Everyday there must be literally millions of plaintiffs pursuing their civil claims and millions more defending their innocence. In such a scenario, technology can help to manage cause lists, maintain files in an orderly way, perform ministerial tasks and monitor performance indicators.

The laws which concern the district judiciary are CPC, CrPC, IPC, Evidence Act and Contract Act, which are British-era laws, designed for the colonial project and did so admirably well. One could say that in the 21st century judiciary, administering colonial era laws is an anachronism. It may be re-called that a fourth of India was princely India, outside the pale of the colonial judicial system, and out and out feudal till 1950. The ruling prince was the final word in civil and criminal cases.

One of the main reforms we need is complete and all embracing separation of the Judiciary from the Executive, right across the board. Why this did not happen in the early years in spite of Article 50 of the Constitution is a mystery worthy of study by scholars. Separation of powers is a basic doctrine of constitutional governance all over the world. But in the early years, the Executive was wary of the Judiciary, fearing its populist policies on land reforms getting upset by the courts. This is well documented by Dr Tripurdaman Singh in “Sixteen Stormy Days” (Penguin Random House 2020). Although there was separation of the Executive from the Judiciary under Government of India Act, 1935, and technically the separation is also a part of our Constitution, there are still many ways in which the Executive controls the Judiciary in the matter of filling posts, providing infrastructure and disregarding well settled jurisprudence.

In the field of personal liberty covered by CrPC 1898 and now by CrPC 1973, the Executive (read the politician and the police) has many ways of influencing decisions on whom to prosecute. These decisions are not taken by independent, well-trained and experienced prosecutors but by police-dominated prosecutors who are completely under the Executive. This used to be the feudal practice and is insidiously still prevalent because district judiciary under the sessions judge, with the power to hang men, is not treated as supreme in criminal matters; police officers are supposed to know better .

Technology must be used to purposefully monitor the case load before individual judges. Advanced software can inform him of the kind of civil suits pending before him, whether at the stage of service, pleadings or evidence. Similarly, he can study stages of the criminal trials in his court. Going into even greater detail, policy makers can discover the nature of say environment related cases or cases relating to women and children or weaker sections to decide if some amendment in the laws is needed to improve them.

Reform measures can be quickly introduced by research and analysis of the case load in the district judiciary. The scope of using technology is enormous for assessing the performance of individual judges to guide them in their work and remove weaknesses, improve working conditions and infrastructure.

Under Section 224 of the Government of India Act, 1935, the High Court in British India exercised only “superintendence” over all courts in India which were subject to their appellate jurisdiction. District and sessions judges were considered very senior in judicial matters, way above district magistrates and superintendents of police whose confidential reports were written by them. This is not so any more. District magistrates (or deputy commissioners) and senior superintendents of police are strong centres of power and influence, while district and sessions judges are “subordinate” and under the “control” of the High Court.

It is the judiciary itself which has weakened the district judiciary, much to the delight of the powerful political masters. The time has come to undo self-defeating measures and go back to the times when district and sessions judges were strong, powerful and respected, but never feudal in thought and practice.

Did you find apk for android? You can find new Free Android Games and apps.
Share
Facebook
Twitter
Pinterest
WhatsApp
Previous articleSupreme upholds the constitutional validity of MPID in Financial Establishment Act
Next articleSupreme Court dismisses Hyundai appeal in case of airbags not deploying in Creta