New tax rules proposed by G-7 are intended to lead to tax equality and could end the practice of global companies raking in billions but looking for loopholes when paying taxes. They could benefit India as well. 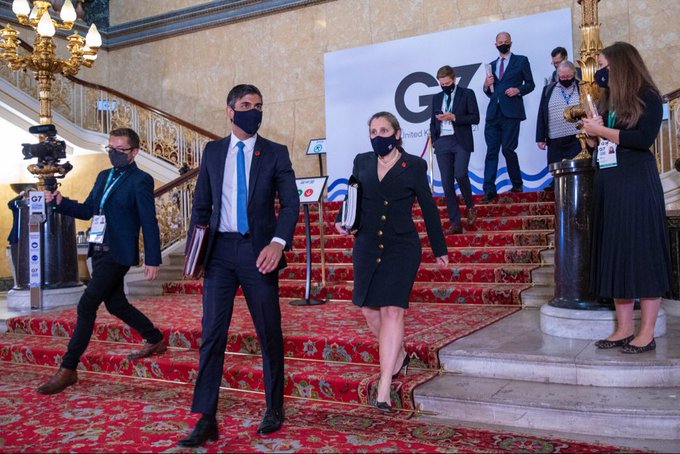 The agreement on a minimum global tax, as proposed by the G-7 summit held from June 11 to June 13 to which India was invited as a guest, is being celebrated as an epochal agreement. Yet there are many hurdles as the G20 meeting scheduled for October 30 in Rome is likely to raise more concerns about such a tax regime. Tax haven countries such as Ireland, Bahamas and Switzerland have expressed reservations and objections, while India has begun digital taxation based on revenue rather than profit.

However, if India agrees, there will be temporary difficulties and economic turbulence. Given India’s size and the trillions of dollars in digital opportunities, India can still gain benefits out of the new rules and continue to offer its exemptions (zero percent tax) for specialised economic zones, sectors and small businesses. The new tax rules may benefit India if multinational corporations market and sell their products here.

The issue of tax justice and equality has become one of the most pressing issues in the global economy since corporations are shifting their profits to countries with the lowest tax rates. The Bahamas is made up of 700 islands along the Caribbean coast, with sunbathers strolling along the sandy beaches and the colourful and popular Junkanoo carnival held in July and August. They are a little paradise—in tax matters—for many. Since the island nation became independent in 1973, it has survived on luxury, tourism, customs duties and on its reputation as a tax haven. There is no income or corporation tax here and tax evasion is not a criminal offence.

That could soon be over. The Bahamas is also one of the 139 countries that have committed themselves to the so-called BEPS project under the umbrella of the OECD. BEPS (Base Erosion and Profit Shifting) wants to combat tax evasion and prevent the relocation of profits by multinational corporations abroad. The project is the backbone of global minimum tax, the implementation of which received a strong boost during the G-7 meeting of finance ministers of the seven leading western countries. It should be at least 15 percent worldwide and will thus prevent tax dumping in many countries. At the same time, companies should in future, not only be taxable where they are based, but also wherever they sell their goods or services.

It would be a small revolution: a lower tax limit that applies almost all over the world. So far, each state has decided for itself how much (and whether at all, as in the case of the Bahamas, where a tax rate of zero percent applies to companies) to tax corporations and which criteria to apply. Therefore, many countries compete to attract companies around the globe.

Such an agreement has consequences for all exporting nations such as Germany and India. Car manufacturers in Germany, for example, sell a growing proportion of their products in China, India and the US, but pay their taxes mainly in their home country, Germany. If taxation rights are shifted to the countries of sale in future, Germany could lose tax revenue.

India would earn more tax benefits for their sales here. India markets itself as a manufacturing country for many products, including pharmaceutical and chemical products, computers and mobiles and service industries like IT-related services. If a multinational corporation comes to India and invests with the intention of marketing its products here and in South Asia, which is generally regarded as a huge market, the tax percentage of its turnover and profit will be India’s revenue in future.

An India-registered company is taxed on 30 percent of its global income as an India-based tax unit. In 2019, the government declared a massive tax cut, lowering it to 22 percent and 15 percent from 25 percent for new manufacturing units subject to certain conditions, as amended by the Taxation Laws (Amendment) Act, 2019, and introducing a new Section (115BAA) to the Income-Tax Act, 1961. This brought the tax rate in line with the average rate in Asian countries, which is 23 percent. China and South Korea have a tax rate of 25 percent, Malaysia, 24 percent, Vietnam, 20 percent, Thailand, 20 percent and Singapore, 17 percent. The effective tax rate for Indian domestic companies, including surcharge and duties, is approximately 25.17 percent.

If India signs this agreement, an Indian company, which has a global reach and a profit of more than 10 percent globally, needs to pay only 15 percent of its global profit to the Indian government. This is also beneficial to India in terms of attracting more FDI for the simple reason of global taxation equality. Foreign companies can plan their taxation strategies accordingly. There will be no cases of tax evasion on Indian soil because a global network of taxation will be in place to know “what is what” and “who is who” in respective countries.

Though taxation is a sovereign subject, India can proactively engage with G-7 countries with a view to multiplying its efforts to plug the loopholes in its taxation system. This will allow it to zero in on tax evaders who flee the country as they can be easily located and brought back. India, in all likelihood, may generate more tax revenue if it decides to implement the new rules.

India has already unearthed myriad opportunities in IT and related sectors to promote its unique potential—its human resource. The Indian government is aiming at creating a trillion-dollar digital opportunity. In the end, it all depends on the design of the reform. Many compromises are likely to come from G-7 and G-20 countries.

In order that this historical agreement works, many interests have to be brought under one roof. In smaller countries, the project is a source of joy. In Ireland, for example, companies only pay 12.5 percent in taxes, which is why Apple and Google have a presence there. But with the minimum tax rate of 15 percent likely now, there is a question mark about whether the tech giants will continue to settle on the green island.

The Amazon case in particular raises questions of whether the reform will actually be as effective as it has been described. The agreement of G-7 states that the reform should only affect very large companies that have a profit margin of at least 10 percent. However, Amazon only gives its overall margin as 3 percent and should get away with a final agreement on this rate largely unscathed—unless the more lucrative business areas are taxed separately. But that raises questions of tax equity and equality and could trigger even more bureaucracy.

It has been criticised that the minimum tax rate of 15 percent is too low as this would lower tax levels worldwide rather than increase it. In any case, it is “absurd” for some countries that the G-7 wanted to reform the tax system by setting up a worldwide minimum tax that is similar to the low tax rates in tax havens like Ireland, Switzerland or Singapore. Meanwhile, potential losers will do everything possible not to lose their advantage entirely. Until the rules come into force, many yachts will moor in Bahamas’ capital, Nassau.

The agreement is intended to end the practice where companies like Amazon, Facebook and Google rake in billions in profits worldwide, but look for loopholes when paying taxes, which is peanuts for tax authorities. But the plan is far from dry. In October, finance ministers of the 20 most important industrialised and emerging countries (G-20) meet in Venice, where they are supposed to approve the agreement. This can be difficult.

While Europeans (Germans, French, British and Italians), Americans, Canadians and Japanese have similar interests in the G-7 body, preferences in the G-20, which include China, Brazil and Russia, are less homogeneous. India has not yet made its stand clear. It is unclear whether they will come to an agreement in the end. Finally, all 139 BEPS states under the OECD umbrella would have to agree to the proposal.