Parliament’s Standing Committee on Defence has noted IAF’s squadron strength dropping to 30. “Make in India” and involving the private sector should be considered to secure our borders. 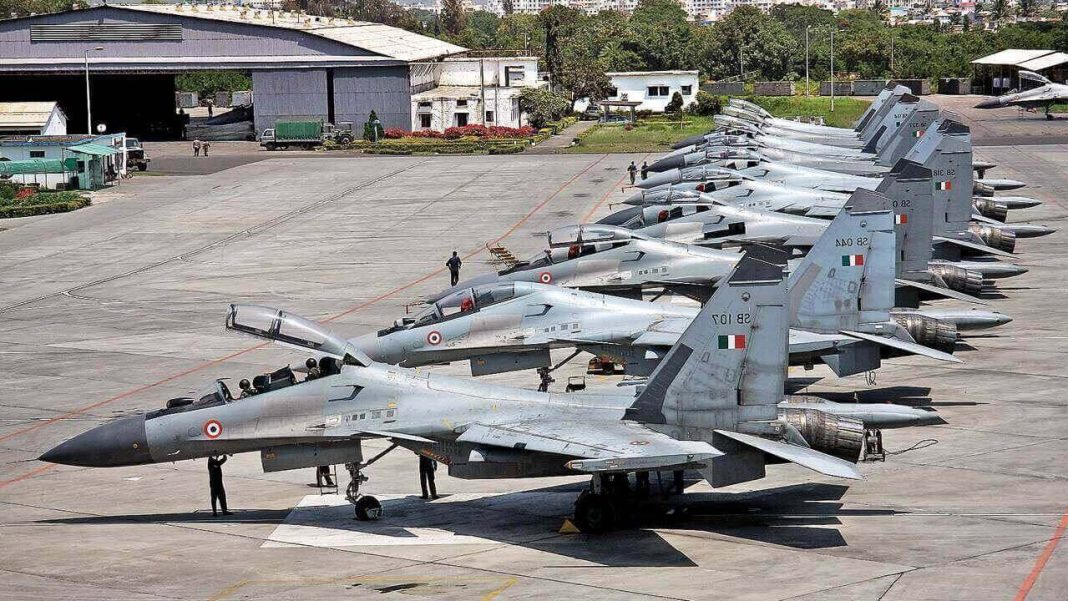 It is an unchallenged dictum during war that the success of any fighting service, whether on land, sea or air, depends largely on its capability to effectively attack the enemy, along­side a successful defensive mechanism.

India is currently facing a combined threat on the east and North East by China and in the west by Pakistan. This, along with a Parliamentary Committee report that the fighting strength of the IAF fighter squadrons had dropped from 42 to 30 is ominous. The report stated that this situation developed due to the phasing out of old fighter aircraft, along with a serious lack of capability to indigenously manufacture them. In the absence of timely replacement of these important fighting machines, this problem has become more worrisome.

This would create a difficult situation for ground forces needing fighter support. The air defence sector too would be exposed to unwelcome danger from attacking enemy aircraft and missiles. Also, enemy air fields and other strategic locations would no longer be under our threat because of our missing fighter aircraft, allowing the adversary air superiority. This would, naturally, be a serious threat to our national security.

Aviation, especially military aviation, is a very costly and technology intensive sector, with the involvement of industrial, technical and scientific support systems. This aspect has to be supported by right defence policies and doctrines to get a meaningful outcome. Right from 1947 onwards, there was progress in some aspects, but this was not sufficient to support a modern military aviation field.

Coming to doctrines, it was felt for a very long time that India, being a peace-loving country, should not pay much attention to violent thoughts of war or even manufacture and export fighting material. This policy slowly changed, but somehow real effort and zeal was missing.

Let’s take the development of a fighter aircraft called HF-24 Marut. In the late fifties and early sixties, the Indian government agreed to develop this aircraft with HAL with famous German designer Kurt Tank as lead.

The lack of high technology led to our failure to develop the right engine for the aircraft. Also, reluctance to pursue the matter with foreign developers resulted in the project going for an underpowered propulsion system. In spite of getting inducted in 1967 and showing good results during the 1971 war, the aircraft was left with improper engines and grounded under pressure from foreign suppliers who were keen to induct their own machines. This is a classic case of lack of proper defence policy and home technology.

Presently, the IAF is one of the leading air forces of the world but is still dependent on foreign suppliers to maintain its fighter, transport and helicopter fleet. We are predominantly dependent on Russian suppliers to provide us with SU-30 MKI and MiG 29s, and before that the MiG 21s, MiG 23s and MiG 27s. The MiG 21 came to us in 1963 and was also supplied to the Chinese. The Chinese reversed engineered it to make their own F7-MS and supplied it to Pakistan and other countries as F7Ps. Meanwhile, we in India have had no political impetus to develop it ourselves. Hence, the majority of our fighter fleet consisting of MiG 21s have started getting old, with serious technical problems, and are getting retired. This was the case with MiG 23s and MiG 27s too.

Similarly, British-supplied Jaguar, Canberra and Hunter fighter jets too started getting old, and over a period, had to be retired. Gradually, the Indian government realised this problem, but had little option except to depend on foreign suppliers. India was dependent on the Russians for MiG-29s and latter on, for the Sukhois 30s in the nineties.

The French Mirages inducted in 1985 are still with us and give good performance. However, by the late 90s, it was decided to go for more advanced fighter aircraft and French Rafale jets were selected for inductions. After much political debating, the government ordered these aircraft. They started arriving from 2020 onwards and are making close to three squadrons, located strategically against the enemy across the border.

It was to due to some right thinking minds in the 70s that it was decided once again to go for indigenous development of light combat aircraft. However, after much procrastination, development did start. Again, the old problem of engine started. The home-built Kaveri engine could not be developed due to various technical shortcomings which still persist. The aircraft did fly in the early 2000s and is now equipped with an American GE 404 engine which is being used in two squadrons of the IAF fleet.

Prime Minister Narendra Modi has gave the signal for induction of 83 Tejas MKIA last year at a cost of Rs 48,000 crore, and the second LCA plant was inaugurated in Bengaluru last year. This change in policy and planning augurs well for India, but a great amount of work has to be done still in home technology to wean us away from foreign dependency.

Steps to be taken to replenish the depleting fighter squadron strength are:

The writer is a defence and military analyst.

Did you find apk for android? You can find new Free Android Games and apps.
Share
Facebook
Twitter
Pinterest
WhatsApp
Previous articleRajasthan High Court disposes of PIL on using both sides of A4 paper in the court proceedings
Next articleAnything for a Clean Sweep