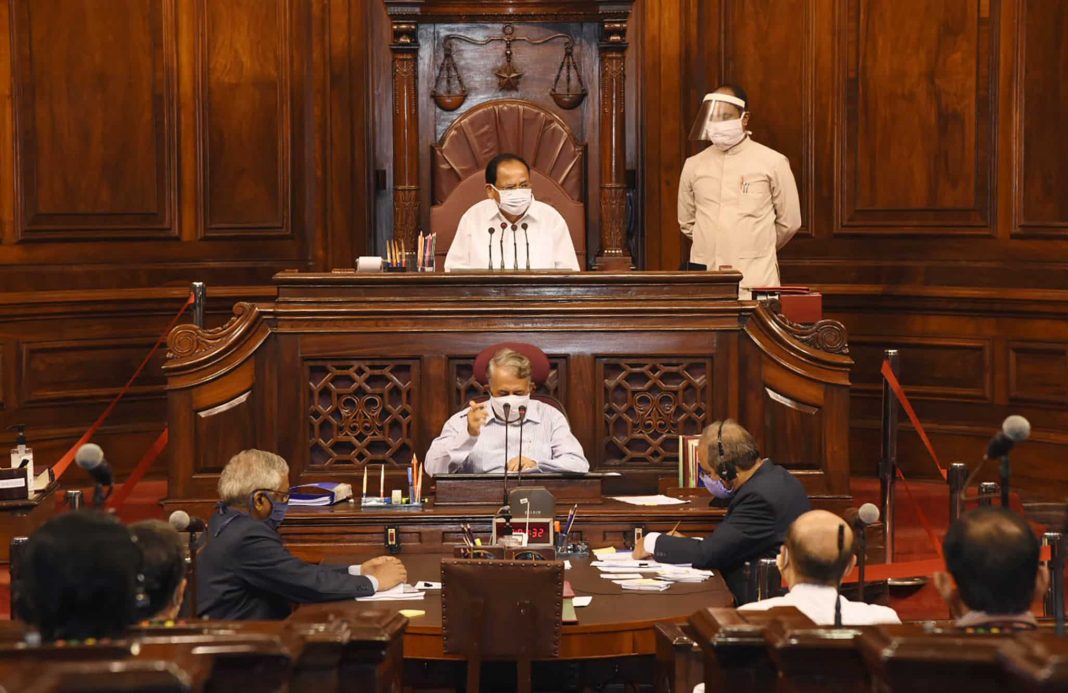 The Lok Sabha has been without a Deputy Speaker for 15 months despite a mandate given by Article 93. The Speaker has to fix a date for the election but, intriguingly, Om Birla said it was not his job to do so.

ON September 14, the first day of an unusual corona compliant Monsoon Session, Rajya Sabha member Harivansh Narayan Singh was re-elected Deputy Chairman of the House in somewhat unspectacular fashion through a voice vote in a two-way contest. After his election, he was escorted to his temporary seat by the Leader of the House and the Leader of the Opposition and felicitated by the Chairman, the prime minister and leaders of several political parties.

The post had remained vacant for a little over five months since Singh automatically demitted office on April 9, 2020, upon completion of his six-year term as Rajya Sabha member. He had earlier served as Deputy Chairman from August 9, 2018, till his retirement.

The Rules of Procedure and Conduct of Business of the two Houses have identical provisions relating to their respective deputies. Sub-rule (1) of Rule 8 of the Lok Sabha Rules clearly states that the election of the Deputy Speaker shall be held on such date as the Speaker may fix.  Sub-rule (1) of Rule 7 of the Rajya Sabha Rules, relating to “Election of Deputy Chairman”, is also similarly worded. Thus, there is no ambiguity about who has to initiate the process for electing the two deputies.

Further, the Rules also provide that after the date of election has been decided by the Chairman, Rajya Sabha, or the Speaker, Lok Sabha, as the case may be, any member of the concerned House may give notice in writing of a motion that another member may be chosen as the Deputy Chairman of the Rajya Sabha/ Deputy Speaker, Lok Sabha. The notice shall be seconded by another member and it shall enclose a statement by the member proposed that he is willing to serve as such.

On the appointed day, all valid motions are put to vote, one by one, in the order in which they have been moved, and are decided, if necessary, by division. If any motion is carried, the presiding officer shall declare that the member proposed in that motion has been chosen. The remaining motions shall not be taken up. The election of the deputies is normally held on the first day of the session following the arising of the vacancy.

There are constitutional provisions too for the two deputies. Article 89 provides that the Council of States (Rajya Sabha) shall, as soon as may be, choose a member of the Council to be the Deputy Chairman. Similarly, Article 93 mandates that the House of the People (Lok Sabha) shall, as soon as may be, choose two members of the House to be Speaker and Deputy Speaker, respectively.  Articles 90 and 94 make provision for the vacation and resignation of, and removal from, the offices of Deputy Chairman and Speaker and Deputy Speaker. Further, Articles 91 and 95 provide that in the absence (caused by illness, resignation, death or otherwise) of the respective presiding officers, the Deputy Chairman and the Deputy Speaker shall perform their duties.

In the day-to-day working of the two Houses, some of the important duties that the two deputies may be required to perform in the absence of their presiding officers include regulating the discussion in the House and maintaining order; suspending a sitting member for obstructing the business of the House, or adjourning the House in case of  major disorder. The presiding officer, or in his absence his deputy, is also the chair of the Business Advisory Committee, which is responsible for deciding the business of the House and allocating time for various items on the agenda. He also chairs the General Purposes Committee and the Rules Committee of the House and appoints the chairpersons of other committees from amongst its members. He also nominates a panel of the members of the House (six Vice-Chairmen in the case of the Rajya Sabha and ten chairpersons in the case of the Lok Sabha) to assist him in conducting the proceedings of the House. As per Article 100 of the Constitution, the Chairman or Speaker, or a person acting as such, shall not vote in the first instance. However, in case there is an equality of votes, he shall exercise his casting vote.

In spite of these similarities in the election process and the basic role of the two deputies in terms of the Rules of the two Houses, there is an important difference in their overall duties and responsibilities on account of the dissimilarity in the status of their respective heads. The Speaker of the Lok Sabha, to whom the Deputy Speaker reports, is a member of the Lok Sabha. The Chairman of the Rajya Sabha, on the other hand, is the Vice-President of India; he is not a member of either of the two Houses of Parliament. As a matter of fact, he is elected by the members of both Houses, voting together.

As the Chairman of the Rajya Sabha is the Vice-President, he has multifarious functions to perform in his primary role. He has to act as president and discharge his functions during casual vacancy in that office or during the latter’s absence (Article 65). Even otherwise, he assists the president in his manifold duties and responsibilities. He meets foreign delegations that come to India and also leads goodwill delegations abroad. He is the chancellor of certain universities such as the Universities of Delhi, Punjab and Pondicherry. He is the president of the Indian Institute of Public Administration and the Indian Council of World Affairs.  He also attends a variety of functions and events.

In such a situation, during the Parliament session, as Chairman of the Rajya Sabha, he sits in the House mostly during the forenoon and other important sittings such as those relating to discussion on and passage of major bills. The Deputy Chairman of the Rajya Sabha, therefore, has more onerous responsibilities to discharge in the day-to day working of the House than the Deputy Speaker of the Lok Sabha.

A Joint Sitting of the two Houses is presided over by the Speaker of the Lok Sabha. In his absence, the Deputy Speaker presides. In the eventuality of both being absent, the Deputy Chairman, Rajya Sabha, presides according to Rule 5 of the Houses of Parliament Joint Sittings and Communication Rules, 1952. The Rajya Sabha can thus ill afford to keep the post of Deputy Chairman vacant for any period of time; the Lok Sabha perhaps can since it has a full-time presiding officer.

Article 93, as mentioned above, mandates that the Lok Sabha shall, “as soon as may be”, choose a member to be Deputy Speaker. For the Lok Sabha to do so, the Speaker has to fix the date for the election under Rule 8 of the Lok Sabha Rules. Are 15 months not “soon” enough for this process to be rolled out? That is the question.