“NEET Not a Holy Cow”

The Tamil Nadu government and the governor seem to be headed on a collision course over this crucial medical exam as the former has passed the NEET Exemption Bill in contravention of the apex court’s opinion. 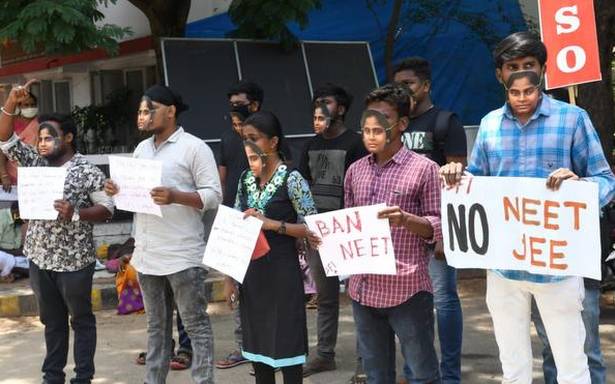 The Tamil Nadu assembly passed the NEET Exemption Bill once again without accepting the suggestions offered by Governor RN Ravi a few weeks ago. The governor had returned the Bill to the assembly for its reconsideration after keeping it pending for around four months. Even the Supreme Court had held the NEET scheme to be in complete conformity with the Constitution as it addresses the issues of social justice.

The DMK government had declared in its manifesto that it would scrap NEET. After coming to power, it constituted a committee and passed the bill to abolish NEET based on a report of the AK Rajan Committee. The governor did not find the report convincing and asked the Speaker to present the Bill for reconsideration in the assembly exercising his powers under Article 200 of the Constitution.

In his communication to the Speaker, the governor reportedly said: “When the Supreme Court has found the NEET to be in the national interest and also for the protection of the weaker section of the society, will it be open for the State Government to seek an exemption from NEET, particularly since the same has been held to be mandatory and applicable across the country? The Supreme Court has held the NEET scheme to be in complete conformity with the constitutional scheme. Article 46 and 47, referred to by the Supreme Court, address the issues of social justice at large and particularly concerning the scheduled castes, scheduled tribes, and weaker sections. Public health is also a major component of the same.”

It is noteworthy that the assembly acted with rocket speed by calling a special session and passed the Bill in the original form without accepting the suggestions of the governor. The assembly has sent a strong message to the governor that it is constitutionally competent to enact the law to scrap NEET and will not give up the issue.

In an article titled “NEET, is discriminatory, against social justice”, published by The Hindu on February 9, 2022, Tamil Nadu Chief Minister MK Stalin defended the NEET Exemption Bill in these words:

“NEET is not a system established by the Constitution. It was not made a part of the Constitution. The Medical Council of India mandated the creation of NEET. When such an examination was proposed in 2010, Muthamizharinar Kalaignar, the then Chief Minister of Tamil Nadu, vehemently opposed it. It was also opposed by a number of Indian states. This examination has been challenged in 115 cases across India. Tamil Nadu is the state that is leading the charge in this direction…. Private training institutes benefit from NEET. The NEET exemption Bill is being introduced for the benefit of those who cannot afford to pay for so much for training. NEET is an impediment to the entitlement of the poor and needy children to education. In their dream of becoming doctors, a barrier wall has been placed in the name of NEET. ‘You cannot be a doctor,’ says NEET. ‘You do not deserve it,’ it says, halting one’s progress. That is why the NEET Exemption Bill has been introduced. I do not think I need to go into great detail about the abnormalities in that exam at this assembly. So, to summarise, NEET is not a holy cow. It attempts to marginalise students from low-income families in the guise of merit. As a result, we oppose the examination and demand an exemption.”

The governor does have many options and will have to clear the Bill as per the constitutional scheme in Article 200. He is bound to give his consent to the Bill if he returns it to the assembly for reconsideration and the assembly passes the Bill again, with or without accepting his suggestions.

In certain situations, the governor has more options. If the assembly passes any Bill that undermines the powers and position of the High Court, the governor is bound to reserve such a Bill for the president’s consideration. However, the governor’s occasional use of discretion to examine the constitutional validity or desirability of a Bill passed by the legislature and asking for a reconsideration is now a matter of constitutional practice in many states.

The governor is a nominee of the president, whose paramount duty is to preserve, protect and defend the Constitution and laws. He cannot be a mute spectator if the state government plays with the Constitution or the laws. The Tamil Nadu governor has rightly intervened in the NEET Bill case. But now he should clear it and send it to the president as the Bill relates to medical education that falls within the Concurrent List and the president’s assent is necessary to avoid repugnancy with the central law.

Notably, the governor had one more option given his powers under Article 200. At the initial stage, when the assembly presented the Bill to him for his assent, he had the opportunity to send it to the president. Had he exercised this option, the situation would have been different and the state government could not have built so much pressure on him. However, the Constitution does not prescribe any timeline during which the governor has to give his assent to a Bill passed by the assembly and using this lacuna, he can hold the Bill for an indefinite period. Some governors and a former president have used this power in the past. In political jurisprudence, it is called a pocket veto. No court of law can direct the governor/president to accord his assent to the Bill as this issue is not justiciable.

Apart from the constitutional issues discussed above, some legal commentators and political scholars are also questioning the steps taken by the Tamil Nadu government to scrap NEET. Several people believe that the move is politically motivated and if NEET is exempted, the level of medical education will deteriorate in the state. If today Tamil Nadu scraps NEET, tomorrow more states will follow. This trend will affect the interests of meritorious students and deteriorate the level of medical education in the country.

The national test for medical education was conceived as a way out of longstanding problems with the medical admission system in the country—from multiple entrance examinations to irregularities in the admission process. But NEET is also not far from controversies. Students have to spend lots of money to prepare for the entrance test. All of them cannot afford the high fees charged by coaching institutes. Therefore, states should explore some mechanism to provide free coaching facility to such students.

The Tamil Nadu government can also choose better options to encourage students to clear NEET. The government should invest more resources in the medical education sector and provide better guidance to the students who have to pass NEET. Exempting NEET will invite political interference in the medical education system. It appears the governor raised genuine concerns keeping in view all these circumstances. Now, the ball is going to the president’s court, who will take a call on the aid and advice of the Union cabinet headed by the prime minister. If the president accords his assent, the Bill will become a law and NEET will be scrapped from Tamil Nadu.

However, the affected parties and public-spirited citizens can challenge the constitutional validity of the Tamil Nadu NEET exemption law and the courts can examine the matter from the constitutional angle. No state can play with the students to build its vote bank. Merit should be the sole criterion for admission to higher educational institutions.

The Tamil Nadu government should not enact the laws in haste. In the insightful words of Dr BR Ambedkar:

“I feel that the Constitution is workable; it is flexible and strong enough to hold the country together both in peacetime and in wartime. Indeed, if I may say so, if things go wrong under the new Constitution the reason will not be that we had a bad Constitution. What we will have to say is that man was vile.”

—Lokendra Malik is an advocate in the Supreme Court and Balram Pandey is a 5th Year Law Student, Symbiosis Law School, Noida