With 45 million cases in various courts and heavy caseload, time-bound justice is a chimera. The bulk of cases have to be resolved through traditional legal procedure and a robust judicial workforce. 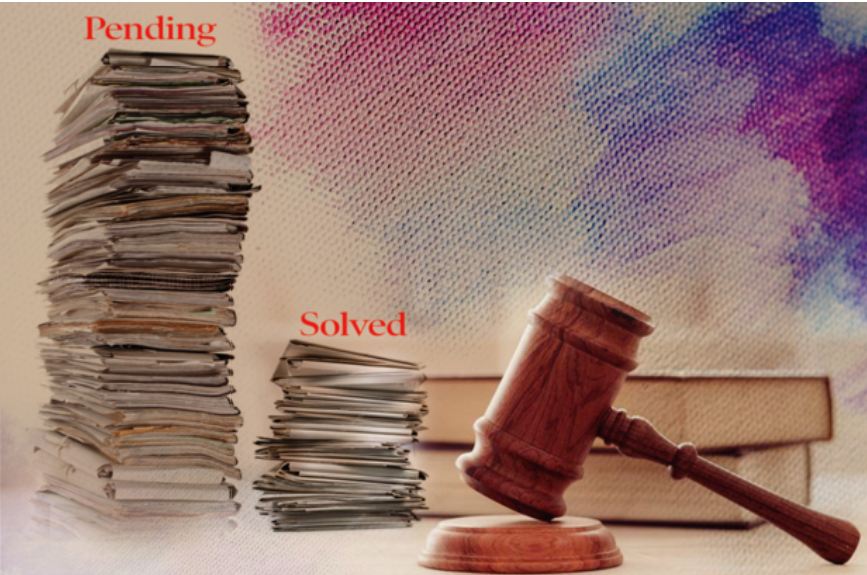 The backbreaking backlog of cases in courts has become a bane to the justice delivery system. The Indian judiciary is facing an ever increasing caseload and a large number of vacancies across all levels. Presently, about 24% of cases are decided within a year and 46% after three years. This has a cascading effect and is seriously impacting justice dispensation.

The pendency data is also daunting. According to statistics from the National Judicial Data Grid and the Supreme Court, there are more than 69,000 cases pending in the apex court, 58.5 lakh cases in various High Courts and 3.9 crore cases in district and subordinate courts.

Some time back, Chief Justice of India NV Ramana had cryptically remarked: “The often-quoted statistic that pendency in Indian Courts has reached 45 million cases, which is perceived as the inability of the Indian judiciary to cope with the caseload is an overstatement and an uncharitable analysis.”  Clearly, there is more to this than meets the eye and there are many factors which fuel pendency.

The rise in pendency has often been ascribed to the fact that there are not enough judges. In its 120th report of 1987, the Law Commission stated that 50 judges are required per 10 lakh of population. Currently, there are only 17 judges. If the 50 target is accepted, this works out to an additional 98,000 judges. If these vacancies in courts are filled, pendency could be curtailed and justice delivery would be efficient.

Shailesh Gandhi, former Central Information Commissioner and RTI activist, has done research on pendency related issues. He has proposed innovative solutions. Gandhi said: “Our study on all the courts was done using data from the Supreme Court website for the period 2006 to 2017. This showed that the average increase in pendency was about 2.5% per year. The sanctioned number of judges was about 18 per 10 lakh, but the average vacancy in judicial positions was over 21%. If the vacancy had been filled, pendency should have gone down each year by over 17%. We do not need 50 judges per 10 lakh people.’’

The resultant arithmetic indicates a negative balance. The system would then also be able to deal with some increases in new cases. By increasing the number of judges and reworking judicial work hours, a considerable breakthrough can be achieved.

Gandhi proposed: “The only shortfall could be of courtrooms. If we expect that there will be no courtrooms for the full complement of judges, about 6,000 courtrooms could function in two shifts as suggested by Justice Dhabolkar. Most of the contested cases, civil and criminal, take two to five years for disposal.”

However, Justice Narendra Purushottam Chapalgaonkar, former judge of the Bombay High Court, has a slightly different take on judges and pendency. He said: “It is true that if number of judges is increased, case disposal rate will also increase. However, it is a myth that by only increasing the number of judges, we can reduce the caseload. The case disposal rate is certainly not directly related to judges’ numerical strength. We need good judges who are strong in their homework and they must be given backup support like library and staff. Young people should join the judicial ranks and the more competent judges with expertise and specialised knowledge should be given tenure extensions.”

Normally, the judiciary is not proactive in initiating the selection process of judges. This results in lag between vacancy and recruitment. The process of selection of judges must be started a year before the anticipated retirement date of a judge and the collegium recommendations must be sent to the government three months before the vacancy occurs. There should be a similar approach for subordinate judges of ensuring that the selection process is finished in advance.

Gandhi asserted: “The selection of judges for the higher judiciary is done by the Supreme Court collegium which often selects them after one or two years of the vacancy arising. The responsibility of selecting judges for the subordinate judiciary is with the High Courts and state governments. The chief justices should accept the responsibility of ensuring that there are less than 5% vacancies and be held accountable for this.”

Another significant move has been in the direction of adopting digital solutions for disposal of cases. The Supreme Court has been implementing the e-Courts Mission Mode Project across the country, which is currently in Phase 2. As a result of this Mission, the number of computerised district and subordinate courts had increased from 13,672 to 16,845 between 2014 and 2020. Phase 3 envisions an infrastructure for the judicial system that is natively digital.

However, a hybrid system of hearing is currently best suited for hearings. The Covid-19 emergency plan has already laid the ground for hybrid processes.

It is suggested that courts must switch to the hybrid virtual mode immediately and start disposing cases at their normal speed. This will reduce costs for litigants and also give a fair opportunity to young lawyers from small towns. The required hardware is available in all courts. E-filing of petitions, affidavits, payment of fees—SOPs have been prepared and all equipment is available in almost all courts, as per Phase 2 of the e-courts mission.

CJI Ramana has identified procedural barriers as roadblocks in access to justice. He had said that simplification of procedures and a greater thrust on alternative dispute resolution methods should be part of the game plan.

While the Code of Civil Procedure was amended in 2001 and 2002, there is still scope for improvement in issues like written statements, costs, examination of parties, framing of issues, evidence on affidavits and exparte injunctions. As two-thirds of the backlog consists of criminal cases, amendments to the Code of Criminal Procedure and the Indian Evidence Act are also long overdue.

The backlog is equally alarming for both civil and criminal cases; the case ratio is 2:5. Currently, out of the 27.5 million cases pending in trial courts, only about 83 lakh are civil cases and 192 lakh are criminal ones. Most of the contested cases, civil and criminal, take two to five years for disposal. In some states and in some category of cases, the period of pendency may go up to ten years.

There are problems with lack of pre-trial hearings, service of summons, delays in supplying copies to the accused, delays in framing charges, repeated adjournments, non-availability of witnesses, lack of public prosecutors, etc.

Recently, the government had approved the continuation of more than 1,000 Fast Track Special Courts (FTSCs) as a Centrally Sponsored Scheme (CSS) for two years (April 2021-March 2023). But these courts are no panacea for quick delivery of justice. As of December 2021, the number of pending cases in Fast Track Courts (FTC) was over 10 lakh. This showed that these courts were not immune to the problems faced by regular courts. There are ad hoc appointments, funds crunch and no change in procedure tailored to the needs of FTCs.

In 2019, the National Crime Records Bureau report showed a pendency rate of 89.5% and a conviction rate of 27.8% for rape cases in FTCs. The NCRB report also showed that nearly 81% of all FTC cases took between one to 10 years to be completed.

Solving legal disputes through Alternative Dispute Resolution (ADR) is also the need of the hour. Arbitration and mediation are methods to resolve conflicts without going through arduous legal channels. If adopted correctly, it can go a long way in reducing pendency of specific cases.

Justice Chapalgaonkar said: “ADR has now become time bound due to relevant amendments in law. However, in mofussil towns, it is still costly as compared to what the apex court wants. The appeal against arbitration awards are required to placed before the district judge. Hence, the chances of cases lingering in district courts for long are still there. A quick disposal mechanism of appeals needs to be developed and adopted.’’

Clearly, the road to end pendency is not easy. Out of the box methods can be tried, but its success is not guaranteed. The bulk of cases have to be resolved through traditional legal procedures and a robust judicial workforce has to bite the bullet.

Did you find apk for android? You can find new Free Android Games and apps.
Share
Facebook
Twitter
Pinterest
WhatsApp
Previous articleLifting the Veil
Next articleSupreme Court says no bar on power of magistrate or court of session in summoning accused not named in police report