Incidents of unruliness inside the Houses are not new and lead to loss of work. Is it time to constitute a permanent panel which can make suggestions to safeguard democratic traditions and punish the perpetrators? 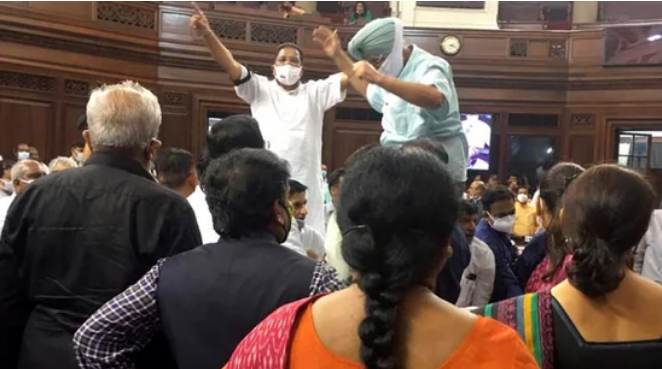 On August 11, 2021, both Houses of Parliament were adjourned sine die, two days before schedule after the Monsoon Session was continuously disrupted by Opposition protests over the Pegasus snooping row, farm laws, and other issues.

Vice-President Venkaiah Naidu, who is the Rajya Sabha Chairman, and Om Birla, the Lok Sabha Speaker, expressed anguish over the washout, with Naidu briefly breaking down in the House. Naidu’s outburst was directed at incidents of the previous day, which he called a “sacrilege” and a new “low” in the country’s “temple of democracy”.

During a discussion on farmers’ issues, Opposition members had climbed atop a table and some MPs were also seen squatting on the tables of the front-row seats, forcing multiple adjournments. During one such break, a member was seen throwing a document at the Chair, while standing on the table.  As Rajya Sabha TV did not telecast the protest, several Opposition MPs recorded the events and posted them on Twitter.

The uncouth dance of democracy, choreographed against the backdrop of Pegasus and demand for scrapping of farm laws, was rehearsed while literally throwing the rule book at the Chair and finally executed, ostensibly in protest against the passage of the General Insurance Business (Nationalisation) Amendment Bill, 2021.

During this Monsoon Session, the Lok Sabha (LS) reportedly worked for just 21 percent of its scheduled time and the Rajya Sabha (RS), 28 percent. Some of the precedents have been worse—for the 2010 Winter Session, the corresponding figures were 6 percent (LS) and 2 percent (RS); for Winter Session, 2013: 15 percent and 25 percent; and for the Winter Session 2016: 15 percent and 18 percent. Last year too, during the Monsoon Session, democracy had been “disrobed”, as the Deputy Chairman of the Rajya Sabha rued on September 20, 2020, following the alleged “illegal” passage of the farm bills.

The year before, Naidu had exhorted political parties to put in place a “Code of Conduct” for their legislators to ensure that they do not disrupt the proceedings of the House or resort to unruly behaviour, such as sloganeering or entering the well of the House.

On January 5, 2018, at the end of the 244th Session, his very first after assuming office, Venkaiah Naidu had observed:“It is unfortunate that despite discharging its responsibilities to a great extent, the august House ends up losing some degree of the esteem of the people on account of disruptions and substantial loss of functional time. Intense and passionate submissions and debates are the order of democracy, but disruptions are certainly not.”

In 2015, against the backdrop of the washout of the Monsoon Session, about which the media was full of scathing comments (“Deewana hua Parliament”; “An Unparliamentary Democracy”; “The politics of parliamentary paralysis”; “NGO urges S.C. to frame rules, end chaos” etc), a PIL was filed by Foundation for Restoration of National Values in the Supreme Court for laying down guidelines to allow smooth conduct of business in both Houses. The PIL alleged that over 2,000 hours of Parliament’s time had been wasted over the last two decades because of constant disruptions. It observed that the public at large and the exchequer should not be adversely affected on account of parliamentary proceedings being unreasonably and unjustifiably obstructed, stalled and disrupted by its constituents.

While dismissing the PIL, a Supreme Court bench headed by the chief justice of India, observed: “We have not kept our house clean, how do we tell others to keep their house clean. Should the court monitor proceedings of Parliament? We should know our laxman rekha and never cross it. The Speaker knows how to run the house. It is the Government’s and Speaker’s job to run the House. It is not our job.”

This saga of disruptions is not a new one. In the annual Conferences of Presiding Officers of the Parliament and the State Legislators, spread over more than 25 years, this subject has been discussed and debated, with increasing concern. Thus, in the Conference held in Gandhinagar in 1992 the first item on the agenda read: “Disorder and disturbances in the House at the time of Address by President/Governors and measures to curb them.” In Chandigarh (2001), the agenda crystallised into: “Need to evolve a Code of Conduct for legislators and steps to contain frequent adjournment of the legislatures on account of interruptions/ disturbances.” In Thiruvanathapuram (2007), it was even more stringent: “Indiscipline including disregard of Presiding Officers, disturbances, disruptions and other serious acts of misconduct in legislatures—Future strategies to improve the situation.” In Chandigarh (2008), there was no respite: “Need to evolve procedural devices and frame rules to control unruly behaviour of the Members, their entry in the well of the House, obstruction in the business of the House and ensure improved management”. By the time we come full circle to Gandhinagar (2016), the situation is somewhat facetious: “Measures to be taken for ensuring attendance of the Members during the sittings of the House and for improving quality of debate…”

On the occasion of the Golden Jubilee of Independence, political parties expressed their concern over the breach of discipline and decorum in our legislatures. A resolution was adopted unanimously on September 1, 1997, in the Houses of Parliament whereby the Members committed themselves to maintain the inviolability of the Question Hour, to refrain from transgressing into the well of the House or from shouting, and to desist from interruptions during the address of the president.

A composite reading of the Rules of Procedure and Conduct of Business in the Council of States and the Lok Sabha provides an imaginatively comprehensive list of 23 “Dos” and, mostly, “Don’ts”. Prominent among these, in the present context, is the exhortation to members to keep to her usual seat while addressing the House; to maintain silence when not speaking in the House; not to obstruct proceedings, hiss or interrupt; not to display any exhibits in the House; not tear off documents in the House in protest, among others.

These are further buttressed by listing of “Parliamentary Customs and Conventions” and “Parliamentary Etiquette” in the Handbooks for Members, issued separately by both Houses. The Rajya Sabha lists 14 customs and conventions and 42 items of etiquette. The figures for the Lok Sabha are 24 and 47, respectively. Gleaned from the debates and discussions in the Houses, there are also rulings and observations from the Chair on the topic of “Decorum and Dignity”.There are also provisions relating to withdrawal and suspension of the members, including “automatic suspension” (for coming to the well of the House), in case of non-compliance.

The Rajya Sabha Rules further have a section titled, Committee on Ethics (Rules 286-303). This Committee is required to oversee the moral and ethical conduct of members and prepare a code of conduct for them. This was duly done and adopted by the Rajya Sabha in 1999. It is a 14-Point Code, which has two omnibus and comprehensive provisions, namely: (i) Members must not do anything that brings disrepute to the Parliament and affects their credibility; (ii) Members are expected to maintain high standards of morality, dignity, decency and values in public life.

So why does the saga of disruptions and interruptions continue unabated? Members argue that it is done for “strategic” reasons. As far as the Presiding Officers are concerned, they have practical difficulty in implementing the rules. If one or two members create disorder, they can be named by the Chairman or Speaker for suspension. However, suspending a sizeable number of members for wilfully obstructing the proceedings of the House or abusing its rules is not possible because suspending so many may compromise the principle of participative democracy and cast doubt on the legitimacy of the debate. A Presiding Officer would, therefore, be hesitant to invoke the rules, particularly, when a large section of the House wilfully obstructs the proceedings.

The happenings during this Monsoon Session, particularly in the Rajya Sabha, perhaps amount to contempt of the two Houses. The official lexicon of the Indian parliamentary system does not mention the phrase “contempt of Parliament”. Article 105 of the Constitution, however, provides for “Powers, privileges, etc. of the Houses of Parliament and of the members and committees thereof”.

The Rules of Procedure and Conduct of Business in the two Houses use the expression “breach of privilege”, the cases relating to which are referred to a Committee of Privileges constituted by the Chairman of the Rajya Sabha or the Speaker of the Lok Sabha, as the case may be. The Committee is required to determine whether a breach of privilege is involved and, if so, its nature and the circumstances leading to it and make such recommendation as it may deem fit.

For all practical purposes, therefore, “contempt of a House” means breach of privilege of that House or its members. The power of the House to punish for contempt or breach of privilege has been described as the “keystone of parliamentary privilege” and is considered necessary to enable the House to discharge its function and safeguard its authority and privilege. This power owes its origin to the powers possessed by the courts to punish for contempt.  Without such a power, the House “would sink into utter contempt and inefficiency”.

The Parliament has powers to punish the contemnor for breach of privilege. In case where the offence is not very serious, the person concerned may be summoned to the bar of the House and admonished or reprimanded. Admonition is the mildest form of punishment, whereas reprimand is the more serious expression of the displeasure of the House. The offender can also be committed to custody or prison.  If the breach of privilege or contempt of the House is committed, two other punishments are available, namely suspension from the service of the House and expulsion. On most occasions, however, an unconditional apology during the proceedings of the Committee has proved adequate, unless the accusedrefused to modify his conduct.

The Committees of Privileges of the two Houses, in recent times, have sparingly recommended punishment, as it is considered infra dig for the House to use this device except in the rarest of rare cases, the time for which has perhaps come.

Addressing a press conference on August 13, 2021, Venkaiah Naidu said that the Opposition and the Treasury benches are his two eyes, which need to coordinate for proper vision. It is, thus, the collective responsibility of both sides to enable smooth functioning of the House. Om Birla too in his press conference on August 11 had underscored the need for “collective effort” to run the Parliament smoothly.

Naidu is contemplating action against “unruly” members of the Opposition. It is likely that the complaints received from both sides may be referred to a committee. There are three options available to the Chairman in this regard. First and foremost is perhaps a reference to the Committee of Privileges.  The second option is the Committee on Ethics.  Finally, there is also the option of setting up a special committee of the Council to deal with the matter.

Since, most of the time, both Houses are at the receiving end of such ungainly interruptions, it may be advisable to constitute a permanent joint committee to look into the matter and make appropriate suggestions from time to time to safeguard the democratic traditions of the country.   Stringent self-regulation, rigorously implemented, is the only way out of this impasse.