With several states breaching the 50 percent quota in government jobs, the apex court has issued a notice to them and Union Territories asking if this could be allowed as the limit was laid down by a bench in 1992. 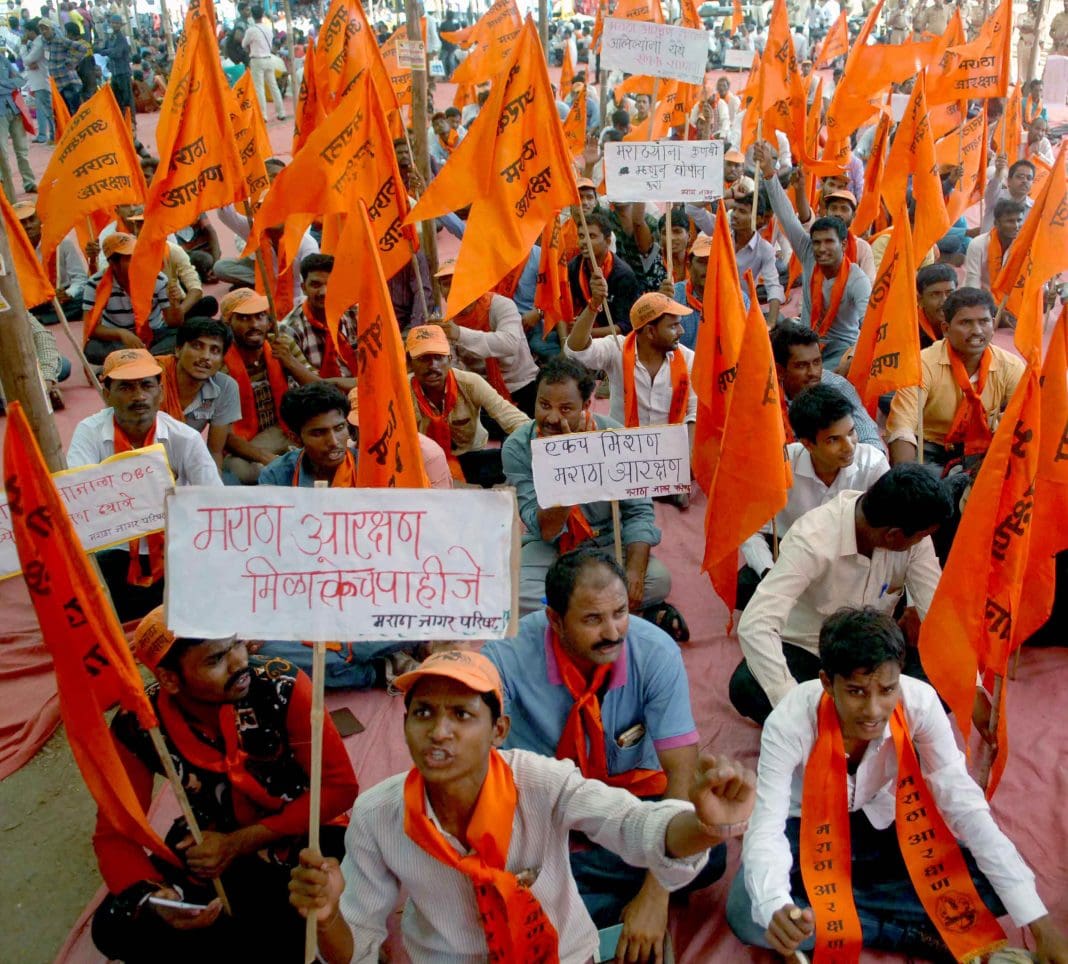 On March 8, 2021, the Supreme Court decided to examine whether its nearly three-decades-old judgment, prescribing a ceiling 50 percent on reservation for marginalised and the poor in government jobs and educational institutions, needs a relook by a larger bench.

The primary occasion was the hearing of a petition questioning the validity of the Maharashtra government’s decision to grant reservation to Marathas. The five-judge bench, headed by Justice Ashok Bhushan, decided to expand the ambit of the case by making other states party to it and inviting them to make their stand clear on whether reservation should continue within the 50 percent  Lakshman rekha.

The Maharashtra State Reservation (of Seats for Admission in Educational Institutions in the State and for Appointments in the Public Services and Posts under the State) for Socially and Educationally Backward Classes Act, 2018, as amended in 2019, provides for 16 percent quota for Marathas. This takes the total reservation in Maharashtra beyond 50 percent. Further, the 102nd Constitutional Amendment, giving constitutional status to the National Commission for Backward Classes, states that the president would notify the list of backward classes for all states in consultation with the governors.

This has raised a doubt whether states have the power to make inclusion in and exclusion from the list of backward classes.

The bench has accordingly formulated the following six questions for its consideration:

In the seminal judgment of the nine-member bench in Indra Sawhney vs Union of India, (also known as Mandal Commission judgment), the Court had held that reservation being an extreme form of protective measure should be confined to a minority of seats. Even though the Constitution does not lay down any specific bar, the principle of balancing equality ordains that reservation of any manner should not exceed 50 percent, it had observed. While doing so, the Court cited Dr BR Ambedkar’s observation in the Constituent Assembly that reservation should be “confined to a minority of seats”. The Indra Sawhney case has been upheld by at least four constitutional benches so far.

However, since that order of the Supreme Court in 1992, several states have passed laws breaching the 50 percent ceiling, including Andhra Pradesh, Chhattisgarh, Haryana, Madhya Pradesh, Rajasthan, Tamil Nadu and Telangana. Many of these laws have either been stayed or are facing legal challenge.  The Tamil Nadu law was included in the Ninth Schedule subsequently, placing it beyond judicial review, but has been separately challenged.

The decision would also have relevance to the legal challenge to the introduction of 10 percent quota for the economically weaker sections among those who do not fall under any reservation (103rd Constitutional Amendment).

Recently, another dimension to the issue was added by certain states coming out with legislations, executive orders and proposals to reserve employment for local candidates in their respective jurisdiction. Apart from Andhra Pradesh, Haryana and Madhya Pradesh, who have already done it, Chhattisgarh, Gujarat and Maharashtra are said to be in the pipeline. The DMK party in its poll manifesto for the up­coming assembly election has promised 75 percent reservation for locals.

One of the most abiding themes in the post-independence evolutionary history of the Indian Constitution, prompted by the relentless pursuit of the Directives Principles of State Policy, has been affirmative action, including a variety of reservations for weaker sections, often at the expense of the freedoms of equality and equal opportunity.

It all began with the Supreme Court judgment in State of Madras vs Smt. Champakam Dorairajan (1951) relating to reservation in admission to educational institutions. The case decided the question of supremacy between Fundamental Rights and the Directive Principles of State Policy. It sowed the seeds of a perpetual tug of war between the executive and the legislature aligned on one side and the judiciary on the other. The first amendment to the Constitution (1951) sought to negate several court judgments, including State of Madras vs Smt Champakam Dorairajan by amending Article 15, empowering the State to make special provisions for the advancement of socially and educationally backward classes of citizens.

In MR Balaji vs State of Mysore (1962), the Supreme Court had ruled that reservation being a special provision for backward classes, should not normally exceed 50 percent. The presumption behind the 50 percent rule was that equality of opportunity was the norm and any special provision for socially and educationally backward classes was an exception. However, in State of Kerala vs NM Thomas (1975), the majority of the bench disagreed with this proposition and held that special measures in favour of backward classes in Articles 15 and 16 were not exceptions to the rule, but an emphatic way of ensuring equality.

While the tussle between the Fundamental Rights and the Directive Principles of State Policy, buttressed by a tug of war between the legislature and judiciary, continued through the IC Golakhnath and Ors vs State of Punjab and Anr (1967), Keshavananda Bharati Sripadagalvaru vs State of Kerala (1973) and Minerva Mills Ltd. vs Union of India (1980), the reservation issue, in particular, came into focus again in M Nagaraj and Others vs Union of India (2006). This case dealt with a challenge to constitutional amendments (77th, 81st, 82nd and 85th) and aimed at nullifying the impact of Indra Sawhney and Others vs Union of India. The Supreme Court, apart from reiterating the ceiling limit of 50 percent and the concept of creamy layer also emphasised the need for the State to establish the existence of the compelling reasons, namely backwardness, inadequacy of representation and overall administrative efficiency, for reservation in each case.

As an interesting sidelight in the case of M Nagaraj and Others vs Union of India, the petitioners argued that Parliament has appropriated the judicial power to itself and acted as an appellate authority by reversing the judicial pronouncements using the power to amend the Constitution.  The counterpoint advanced by the respondents was that the interpretation placed on the constitutional provisions by the Supreme Court becomes part of the Constitution and, therefore, it is open to amendment under Article 368.

It is further to be noted that some of the periodic amendments relate to extending reservation of seats in the legislatures for Scheduled Castes and Scheduled Tribes (Article 334) every ten years, the latest being the 104th Constitutional Amendment (2019). It extended the reservation for SCs and STs in the Lok Sabha and state assemblies, which was due to end on January 25, 2020, for yet another period of 10 years. This was the seventh such 10-year extension given since the Constitution was enacted in 1950. Thus, not only the first, but also the 104th and the recent amendment to the Constitution, was about reservation.

There is no doubt that some form of affirmative action is necessary in a country where social discrimination is widespread. Nor can it be gainsaid that the reservation in jobs and educational institutions has helped those who had been poor and deprived over generations. On the other hand, improving the educational outcomes in government schools and imparting appropriate skills may give better and lasting results in the long run.

Moreover, in recent times, it is the private sector rather than the government that has taken the lead in creating jobs. Thus, reservation in government jobs is leading to shrinkage in the share of the excluded in available and often-declining number of opportunities. Further, indiscriminate increase in job quotas based on caste may address the issue of social equity, but may undermine the people’s faith in the system as a whole.

With the realisation that reservation in government jobs alone cannot satisfy the expanding expectations of the burgeoning population, certain states have taken recourse to the somewhat invidious device of reservation of jobs for locals in the private sector as well. This step is bound to create friction among locals and non-locals, as well as against the natives of that state in the other states. Again, these laws are against the spirit of constitutional provisions (Article 16 and 19) that provide fundamental rights to Indian citizens to work anywhere in the country. Further, a state, attracting and encouraging talent from other states, will be in a better position to become developed and promote welfare of its people compared to the one making the process difficult.

Moreover, in Dr Pradeep Jain vs Union of India (1984), the Supreme Court discussed the issue of legislation for “sons of the soil”. It said that such policies would be unconstitutional, but did not expressly rule on it as the case was on different aspects of the right to equality. Again in Sunanda Reddy vs State of Andhra Pradesh (1995), the Supreme Court affirmed the observation in Pradeep Jain case to strike down a state government policy that gave 5 percent extra weightage to candidates who had studied Telugu as the medium of instruction.

In 2002, the Supreme Court invalidated the appointment of government teachers in Rajasthan in which the state selection board gave preference to “applicants belonging to the district or the rural areas of the district concerned”.

In 2019, the Allahabad High Court struck down a recruitment notification issued by the Uttar Pradesh Subordinate Service Selection Commission which prescribed preference for women who were original residents of the state.

Is the relook, at Indra Sawhney, which is very timely as well as momentous, meant to reaffirm, revisit or rewrite the law? Will it also take a look at the new threat to constitutional unity and integrity posed by the reservation in jobs in the private sector for the locals?  Would limitless reservation be permitted to circumscribe growth?