While an investigation has been launched into the situation in Ukraine, the International Criminal Court must receive full support to give the world a robust and effective international criminal justice system. 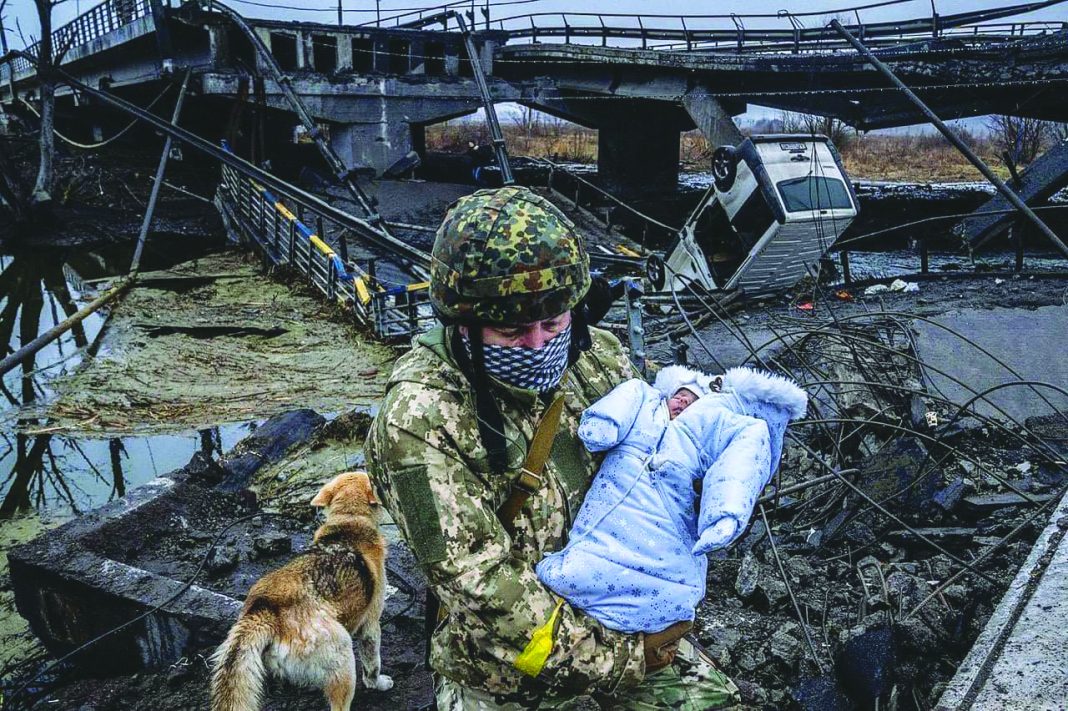 A bomb thrown in a crowded market or at a bus or an apartment block or a suicide bomber blowing himself up leaves behind a huge toll of human lives, suffering and devastation of property. Families are shattered, many men, women and children die. Media reports give all the gory details but the viewers will never know how the victims felt, whose loved ones were blown up or how the survivors limped back to continue their lives with a broken leg or an amputated arm. In a few days, the debris of the bombing will get cleared but the mental devastation and psychological fear in the minds and hearts of the victims shall remain, and they will need solace, healing and comforting. One way is, of course, to catch the people who conspired to throw the bomb and destroy innocent lives, charge, try and punish them. Such acts of terrorism must be strongly dealt with, through the process of law, and all this done quickly and impartially.

In the international arena, acts of invading armies cause huge destruction of buildings, bridges, roads and railways. In addition, invading soldiers loot, plunder, murder and rape the vanquished. Such has always been the reality of wars from time immemorial.

But things began to change after the Battle of Waterloo and defeat of Napoleon. The aftermath was dealt with diplomatically by chancellors and prime ministers, who met at international conferences to draft treaties and protocols. The most well known event was the Congress of Vienna (1815) which brought about comparative peace in Europe, although principalities of Germany united under Prussia making the former very powerful in Europe under Chancellor Bismark. If the object of the conference was to protect the Austrian Empire under the Habsburgs from collapse, this was definitely achieved by Count Metternich as the collapse was put off for another century. Peace was also maintained through a series of detentes and alliances, mostly open but with some secret clauses. Finally, on the fateful day in 1914, the Austrian crown prince was assassinated, peace broke down and the Great War followed.

When Germany was finally defeated at great cost, the German Empire dissolved, and so did the Russian, Austrian and Ottoman ones. The League of Nations was the result of the efforts of statesmen whose first priority was to maintain peace and security to ensure war did not recur. The victors did not foresee that the onerous terms imposed on the vanquished Germany by the Treaty of Versailles would lead to the rise of German nationalism under Hitler, and within 20 years, another European war would follow.

At the end of World War II, the League of Nations gave way to the United Nations. Gradually, many colonial empires also began to give way to independent nations who became a part of the UN, which now has 193 member states. After the fall of the Romanovs, their empire morphed into USSR till Gorbachev introduced perestroika (restructuring) and glasnost (openness). The Russian Federation of today is like the old Russian empire trying to reclaim its old lands. Ukraine is the prime target.

International war crimes are not a subject one deals with in national jurisdictions, though the principles governing trial and punishment for war crimes are not much different. Firstly, there must be a crime or an act which is punishable by law. This means that there must be a binding law which lays down which acts are crimes, what are the basic ingredients of the crime and the punishment for committing them. Then, there must be a procedure to investigate the crime and to try the people who have been charged for committing it. At the trial, judges hear witnesses depose and face cross-examination by the defendant before the verdict of guilt or innocence is pronounced.

The basic principles of law governing criminal trials are internationally recognised in Article 11 of the Universal Declaration of Human Rights (1948):

1. Everyone charged with a penal offence has the right to be presumed innocent until proved guilty according to law in a public trial at which he has had all the guarantees necessary for his defense.

Coming to grave national crimes like assassination of national leaders and widespread killings of citizens, every sovereign nation has the duty to conduct investigations, prosecutions and trials through its own agencies and own courts under its own laws. But sometimes some of these important cases have cross border ramifications.

The genocide of Bosnian Muslims by the Serbian army in former Yugoslavia was probably the first time that the international community recognised the urgency to take cognisance of war crimes and step in to punish the criminals. The Rwanda killings of Tutsis by Hutus was preceded by killings of the presidents of Rwanda and neighbouring Burundi, when their plane was shot down on April 6, 1994. During the three months period from April 1994, almost 8,00,000 people, Tutsis and moderate Hutus, were killed in this horrific genocide. The crimes committed in Sierra Leone by Charles Taylor, the former president of neighbouring Liberia, is another example of war crimes. In the assassination of former Prime Minister of Lebanon Rafic Hariri in February 2005 along with 21 others by a suicide bomber, the conspirators were from across the Lebanese borders.

International tribunals have better global acceptability, more than what most national courts seem to possess. International tribunals are not amenable to the jurisdiction of any national court. The International Criminal Tribunal for former Yugoslavia (ICTY) was the first United Nations court of law that dealt with war crimes that took place during the conflicts in the Balkans in the 1990s. During its mandate from 1993-2017, it irreversibly changed the landscape of international humanitarian law, provided victims an opportunity to voice the horrors they had witnessed and experienced and proved that those suspected of bearing the greatest responsibility for atrocities committed during armed conflicts can be called to account.

The International Criminal Tribunal for former Yugoslavia indicted 161 individuals, 91 were sentenced (the most infamous being General Mladic), 18 were acquitted, some had their indictment withdrawn and some were sent to national jurisdictions. Mladic was found guilty of 10 charges, one of genocide, five of crimes against humanity and four of violations of laws or customs of war. As a top military officer with command responsibility, Mladic was deemed by the Tribunal to be responsible for both the siege of Sarajevo and the Srebrenica massacre of 8,000 Bosnian Muslims.

The Rwanda genocide led to the setting up of the International Criminal Tribunal for Rwanda, established in November 1994 by the United Nations Security Council to try people responsible for genocide and serious violations of international law there or by Rwandan citizens in nearby states. The Tribunal consisted of 16 international judges who sat in four chambers, three for trials and the fourth for appeals. The court eventually convicted 85 individuals at a cost of $1.3 billion.

The Special Court for Sierra Leone was a judicial body set up by the government there and the United Nations to prosecute persons who bear the greatest responsibility for serious violations of international humanitarian law and Sierra Leonean law committed in the country after November 30, 1996, and during the civil war. Charles Taylor and others were convicted and sentenced for long terms for terrorising citizens, giving them collective punishments, murder, rape, sexual slavery, outraging modesty, physical violence and other inhuman acts. None was sentenced to death because under international humanitarian law, death sentences are not awarded.

The Special Tribunal for Lebanon had an international character but applied Lebanese criminal law to carry out the investigation and prosecution of those responsible for the February 14, 2005, assassination of Hariri. The Tribunal’s 11 judges, a combination of Lebanese and international judges, were appointed by the UN Secretary-General for a renewable term of three years. Unfortunately, the trial was held in absentia because the main accused were never produced at the trial.

As must have been noticed, all the above tribunals sat for a fixed term and were wound up when their judicial tasks were over. The International Criminal Court at The Hague came into existence under the Treaty of Rome as a permanent criminal court on July 1, 2002.

The International Criminal Court investigates and tries individuals indicted for the gravest of charges concerning the international community like genocide, war crimes, crimes against humanity and crimes of aggression. The Court may exercise jurisdiction in a situation where crimes were committed on or after July 1, 2002, and committed by a State Party national or in the territory of a State Party or in a State that has accepted the jurisdiction of the Court.

Neither Ukraine nor Russia is party to the ICC, but the ICC does have jurisdiction over this situation because Ukraine issued a declaration granting jurisdiction to the Court. It may be noted that India, the US and China are not parties to the Rome Statute which has 124 State parties. As Ukraine has submitted to the jurisdiction of ICC and 39 State parties of ICC have sent their referrals, the prosecutor has announced his decision to investigate crimes in Ukraine, which fall within the jurisdiction of ICC, from November 21, 2013 onwards.

Worldwide, cross border violent crimes will never cease. For this reason, there must be a permanent international criminal justice system to make perpetrators accountable for their acts, to investigate and prosecute them, to protect witnesses and compensate victims. And most of all, to hold fair and open trials.

The International Criminal Court is a step in this direction. But a long way has to be travelled before the system becomes truly effective all across the world. None of the major powers, the US, Russia and China, are party to the Rome Treaty. Statesmen, jurists and diplomats shall need to debate India’s position in this regard. May be at some later time wisdom shall dawn on India to support ICC and receive the many benefits which will flow from a robust international criminal justice system.