Protests by students over the hijab should be handled sensitively. It would do everyone good to read the National Education Policy which says that the aim of education is to develop constitutional values. 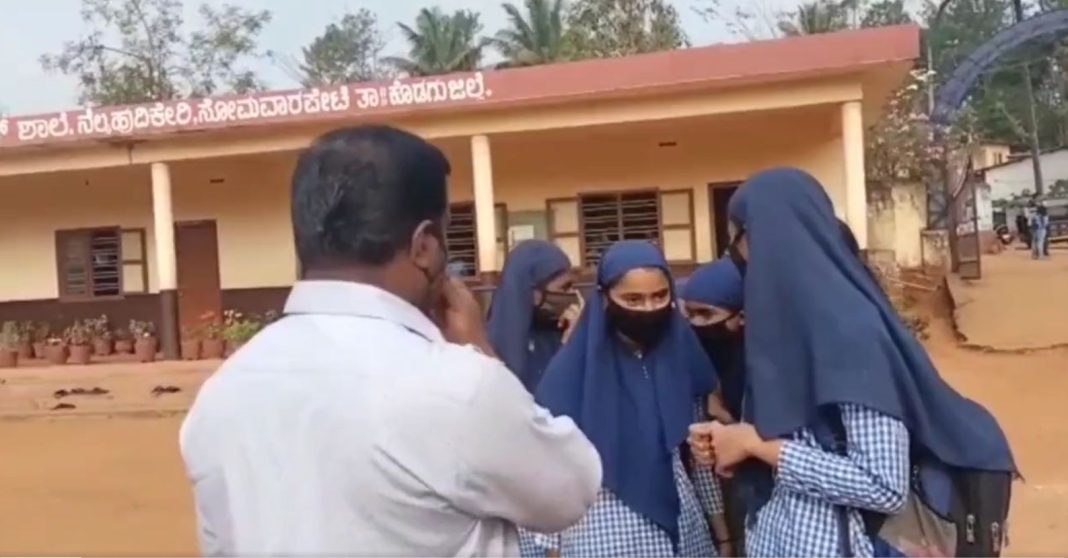 The hijab controversy is all of a sudden threatening to become a constitutional question because the discourse is slipping out of the hands of educationists and into the hands of activist lawyers. This is sad because the matter relates to school students whose education is the primary responsibility of their teachers. We must try and remain neutral in matters which concern the sensibilities of impressionable minds. Trying to legislate on the issue is not easy, but to adjudicate on rights needing protection can be fraught with unforeseen difficulties.

Parents send children to school to learn reading, writing and arithmetic. If this was not necessary for higher education, then parents may as well have kept them home. Higher education is necessary for school leavers if they want to find a job, to become gainfully employed, get married, raise a family and send children to school. This endless cycle goes on and on. And thus, the nation moves ahead by investing in education of its children.

When young boys and girls reach school, they have already learnt many things at home, but some of these they may have to unlearn. For instance, a school boy can no longer say that Emperor Akbar was the greatest king in the whole world, as learnt at home.

He shall learn about other kings of Akbar’s dynasty and many more kings of other parts of India and the world belonging to different periods. In senior classes, he may be helped to critically examine historical facts from diverse sources to compare different kings on the basis of the lands they conquered, the reforms they introduced and the peace they achieved.

Also Read: Teenagers involved in romantic affair do not fall under the ambit of POCSO: Allahabad High Court

The school student begins to gradually realise that there were other things he learnt at home which require to be re-examined and perhaps unlearnt.

This is where sensible teachers play a useful role. They know their students’ strengths and weaknesses and how to help them overcome their difficulties. Schools also teach rudimentary ethics and morals from where some students may begin to even question their own beliefs. Good teachers in secular schools tell students about the many religions of the world without emphasis on any one faith.

Meeting students from other faiths is itself a great learning experience and opens these young minds to new ideas and ways of thinking about their own faith. This helps to bring about transformation in the students, who begin to develop humanism in their own way of thinking. The students emerge from school with illumined minds and a strong belief in the universal brotherhood of man, but at the same time, keeping faith in their religion intact.

Therefore, protests by students should be handled with the sensitivity they deserve. School students are still in their teens and growing up, learning many new aspects of life. If we live by democratic principles, then there should be no place for protests by show of hijabs or saffron scarves. A good headmaster would have converted the controversy into a school debate and allowed everyone to present their views and then place the motion before the full house. This would have shown the strength of the education system and wearing a hijab would not have become a raging controversy.

Now after weeks of protest by girl students asserting their rights to wear the hijab to school, countered by other students wearing saffron scarves around their necks, the whole matter of what to wear and what not to wear in school should be considered by educationists in a holistic way. An educationist knows what is good for the school, for the education they impart, for the students and for discipline. They are responsible for the future mental, physical and moral growth of their students.

When this writer entered the portals of the United Nations, Judge Luis Simon from Uruguay, who had never met a hirsute sardar before, wanted to know the reason why a turban was worn and a bushy beard was maintained. His curiosity was genuine because in faraway Latin America, Sikhs were not that visible.

Later, another colleague, Judge Mark Painter from Ohio, US, described a case he had done about the right of a Sikh to carry a kirpan to his workplace. This US judge had in 1996 upheld an appeal against the conviction of Dr Harjinder Singh for carrying a kirpan. The reason for quashing the conviction was that the kirpan was carried as a religious article and not a weapon. In his opinion, Judge Painter confessed that he was amazed that a case like this would ever be prosecuted at tremendous cost to the state, the defendant and the legal system.

Likewise a turban is now accepted worldwide as a head dress which Sikhs wear. And Sikh boys are allowed to wear turbans to school. Sikh passengers are often asked to remove their turbans at airports by security officers looking for drugs or arms, but largely no one takes offence. It is worth remembering that Sikh soldiers defend the borders wearing turbans, they fought World Wars I & II wearing turbans. There is much better understanding worldwide about men wearing turbans. May be with time, there will be a similar understanding about women wearing hijabs.

A few words about secularism may help in better understanding peoples’ religious feelings. The secular doctrine means that the State shall not recognise any religion as the State religion and everyone shall be free to follow the religion of their choice. This is a wide definition even though the original Preamble to the Constitution did not contain the word “secular”. This made no difference because there were constitutional provisions which laid down the secular doctrine.

Before the Constitution came into force, India was governed by the Government of India Act, 1935 which was enacted by “the King’s most Excellent Majesty, by and with the advice and consent of the Lords Spiritual and Temporal, and Commons”. The noteworthy point is that the Lords Spiritual were 26 bishops of the established Church of England. The Supreme Governor of the Church of England was a position vested in the British Monarch. Therefore, technically speaking, the King Emperor of the Indian Empire was also the head of the Church of England, and for this reason, India was not secular. But there aren’t many instances of the British interfering with religious practices of their Indian subjects. In day-to-day matters, adherents of different religions were left at peace unless there was a clash between two religious groups, in which case action would be taken to maintain order.

When India became a republic, it automatically became secular without a statement of secularism in the Preamble. However, the secular doctrine was laid down in Articles 25-28 of Part III as a part of constitutionally protected rights. Interpreting the government order on school uniforms that “students should wear uniform in the interest of unity, equality and public order” is where some difficulty could arise.

A reference to the National Education Policy should cover points raised by parties on both sides of the hijab debate. Everyone shall benefit if the policy is carefully read and understood. It shall then be realised that there is really no controversy over wearing of the hijab. As long as girls attend schools and concentrate on their studies, schools would have done their duty to inculcate the right values in the students.

“The process and the content of education at all levels will also aim to develop Constitutional values in all students, and the capacities for their practice. This goal will inform the curriculum as well as the overall culture and environment of every school. Some of these Constitutional values are: democratic outlook and commitment to liberty and freedom; equality, justice, and fairness; embracing diversity, plurality, and inclusion; humaneness and fraternal spirit; social responsibility and the spirit of service; ethics of integrity and honesty; scientific temper and commitment to rational and public dialogue; peace; social action through Constitutional means; unity and integrity of the nation, and a true rootedness and pride in India with a forward looking spirit to continuously improve as a nation.”

Secularism is a constitutional value, developed in school classrooms when teachers follow the directions and guidelines given in the comprehensive policy for school education.

Did you find apk for android? You can find new Free Android Games and apps.
Share
Facebook
Twitter
Pinterest
WhatsApp
Previous articleThe right of noticee under SEBI regulations to disclose relevant material not absolute: Supreme Court
Next articleTeenagers involved in romantic affair do not fall under the ambit of POCSO: Allahabad High Court