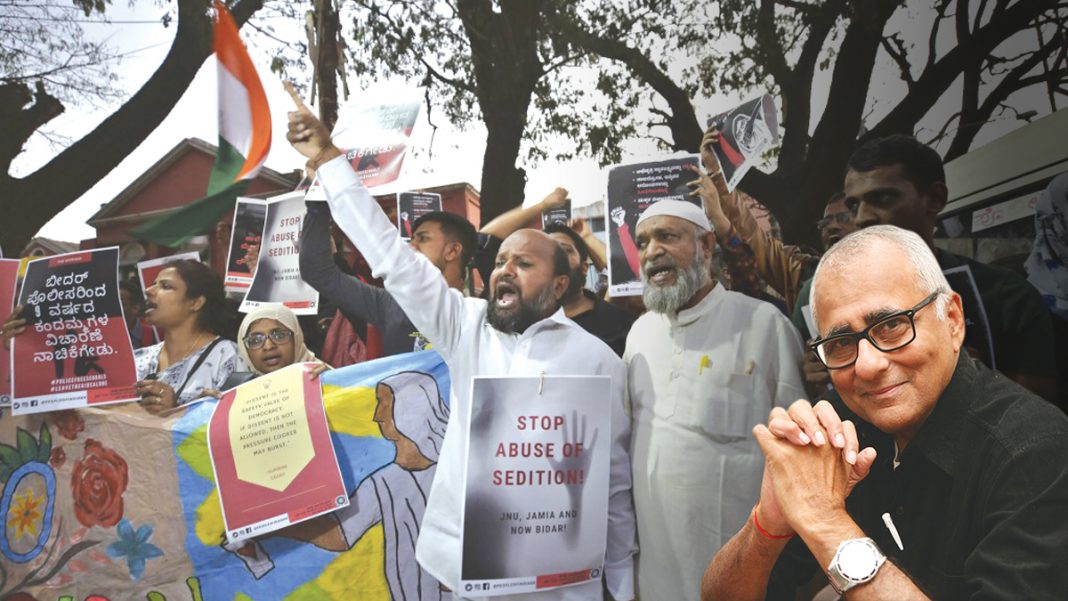 Here’s some really nourishing food for healthy, robust thought: A democratically elected government should be pleased when it faces dissent as this tells it what is going wrong with its administration and how to rectify wrongs. Handling it with an imperial heavy-handedness through the police is self-destructive and ultimately counter-productive.

This is not my pearl of wisdom but rather a distillation of a remarkable piece penned in this issue by the evergreen Judge Kamaljit Singh Garewal:- The rush to book people under sedition for plain dissent whose ceaseless outpourings of sagacity never cease to astound as well as to amuse me.

I have no idea why they retire judges of this calibre especially when age—as Ruth Bader Ginsburg demonstrated—may have little to do with insight, perspicacity and professional competence.

In the context of the ceaselessly burgeoning farmers’ agitation now enveloping major parts of India, with the mainstream media playing Cheshire Cat—now-you-see-it-now-you-don’t—“our very own Marie Antoinettes seem to be telling farmers they can’t have gur, but promise chocolates, and ask them to accept the farm laws”, Justice Garewal writes in his inimitable style.

On the other hand, “a child screaming for chocolate is given gur, his mother says he should eat something Indian and not foreign. The farmers are practical people, they know when they are being led up the garden path. The child does not understand the distinction. His screams become louder. In childish anger, he says he hates his mother, he shall burn the house down unless he is given chocolate.”

Justice Garewal continues relentlessly with his mercilessly elongated metaphor and mixes it at will with homespun Punjabi humour. He posits a situation in which a college student organises a strike against the canteen for not serving noodles. The principal objects because India is at war with that country where noodles are produced. And in the face of the farmers’ agitation, they are asking for gur-shakkar, but the government says they can have chocolate ice-cream.

The Judge sees this as a ludicrously analogous situation to the farmers’ protest who are asserting the agricultural rights of states in legislative matters and calling for repeal of farm laws as Parliament lacks competence. The centre sees this as promoting self-determination.

“Would any sane person,” asks Justice Garewal, “think that lovers of chocolate or noodles are guilty of sedition or the supporters of the farmers’ agitation are secessionists?”

He berates the police for failing to acquire what reasonable men and women aspiring to create a collective community based on differences as well as harmony should acquire in the course of educating themselves: “That  rare commodity called common sense.” They slap Section 124A IPC on chocolate lovers!

This crime (sedition) was introduced in 1871 in the aftermath of the great Indian uprising against the British Empire in 1857, and spruced  up in 1898 in the form we now know it.

Quips Justice Garewal: They still call up Winston Churchill for advice, and take all dissent as disaffection (disloyalty or enmity) towards the government. He recounts that Benjamin Disraeli had guided the Empire to its most glorious heights in the second half of the 19th century and crushed the spirit of India.

During the height of the colonial era, the present criminal laws came to be framed by Thomas Macaulay. These laws still govern us well into the 21st century.

The defenders of accused persons look up the Constitution to prepare their defence and find bold statements of constitutional values of justice, liberty, equality and fraternity. This gives them hope. But in independent India, most dissidents slapped with draconian charges travel hopefully than arrive. They fight for their rights on a wing and a prayer.

Judge Garewal’s passion for liberty and the remedies he suggests form the body of this splendid polemic which I would recommend all politicians and administrators to refer to before running to Churchill or Disraeli or McCaulay for help.

Nations don’t disintegrate that easily, and India won’t crumble just because someone shouts “Autonomy!” from a rooftop. But, as Judge Garewal notes, “the abominable crime of ‘sedition’ continues, without anyone understanding that it is completely at cross-purposes with our constitutional values. We aspire to become a world power, but our timidity in the face of dissent is truly astounding. Ours is a strange land of conflicting ideas and thought. Chaotic, confused and confounding”.