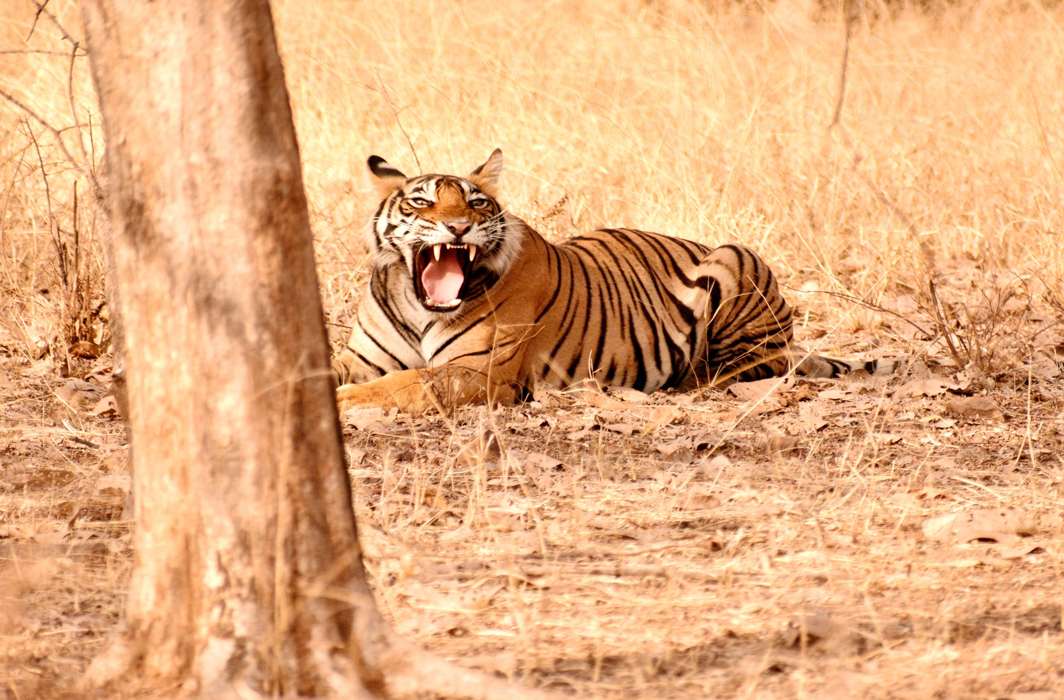 Above: Poaching and tiger attacks on humans are on the rise due to human habitation in the vicinity of the tiger reserves/Photo: UNI

At Ranthambore Tiger Reserve, he was the monarch of all he surveyed. Today, Tiger T24, popularly known as Ustad, is languishing in solitary confinement at Sajjangarh Biological Park in Udaipur. Ustad attained notoriety after he killed a forest guard on May 8, 2015. Tragically, it was human interference that made Ustad a man-eater.

This is a tale which is repeated in Rajasthan’s three major tiger reserves— Ranthambore, Sariska and Mukundra Hills. They have all seen an increase in cases of poaching and tigers attacking humans which, wildlife experts say, is due to human habitation in the vicinity of the reserves. In 2007, the state government decided to relocate villages which fall within the periphery of the sanctuaries. But till now, not much progress has been made. In March 2019, the Rajasthan High Court even issued notices to the state government and authorities concerned over their failure to relocate 43 villages around Ranthambore Tiger Reserve.

Given this background, the recent announcement of the state government that it was considering introducing tigers at nine locations has been met with scepticism by wildlife experts. State Forest Minister Sukhram Vishnoi told the assembly that the forest department was looking at the possibility of introducing tigers in forest areas such as Ramgarh Vishdhari, Shergarh, Kumbhalgarh, Rawli, Toadgarh and Jhiri in Dholpur district, Khetri Bansiyal in Jhunjhunu district, Sultanpur (Bundi) and Shahbad (Baran) over the next 10 years in an effort to reduce human-wildlife conflict and provide new homes for the big cats. He added: “A feasibility study in this respect will be conducted.”

Most wildlife experts say that in theory, the plan sounds good but its implementation will require developing huge infrastructure. Wildlife journalist Kartikey Dev Singh, who has extensively covered tigers, told India Legal that Ranthambore and Sariska have distinct issues. “Ranthambore has a high density of tiger population vis-à-vis land. According to a study by the Wildlife Institute of India, the territory for tigers here is less than the national average. This is the reason why many cubs don’t survive or sometimes move out of their core areas, where they are poached. But in Sariska, the problem is just the opposite. It is a very large area with fewer tigers.” This is the reason why eight tigers have been relocated to Sariska and four to Mukundra Hills Tiger Reserve to decongest Ranthambore.

Singh, however, said that the human habitation problem is common to both. “The rule says there should be no digging, construction or industrial activity within a 500-metre radius of the reserve. But due to the tourism boom, hotels have sprouted in close proximity of Ranthambore and Sariska. At Sariska, villages had to be relocated under the 2007 policy. But only four villages were relocated and in one case, the villagers returned,” he added. He said that relocation of villages had become more complicated after Project Tiger revised guidelines. According to the revised guidelines, critical tiger habitat areas of national parks and sanctuaries are required to be kept “inviolate” for the purposes of tiger conservation “without affecting the rights of the Scheduled Tribes or such other forest dwellers”.

In the revised Centrally Sponsored Scheme of Project Tiger (2008), under the proposed package for the relocation of villagers in the core tiger habitats, there are two options. In case a family opts for payment of the entire package amount (Rs 10 lakh per family), there will be no rehabilitation by the forest department. In case the villagers, through the gram sabha, do not agree to this, the other option is to provide two hectares of agricultural land per family. In case land is not available for this purpose, diversion of degraded forest land may be obtained after due clearance under the Forest (Conservation) Act, 1980.

Singh said the state government would face the same problems in the areas mentioned by the minister as they have extensive human habitation. Even Mukundra Hills Tiger Reserve, he said, does not fulfil these conditions. At Mukundra, at a cost of Rs 12 crore, a 10-ft-high concrete wall has been erected around an area of 80 sq km with a five-ft-high barbed wire fencing above it to prevent tigers from jumping out.

Wildlife enthusiast Deepak Chaturvedi, who recently visited Mukundra Hills Tiger Reserve, said it looks like a big cage. Moreover, he was shocked to see that a national highway and train track were passing through the reserve. “Apart from this, there are at least three to four villages in the reserve,” he added. Before the government embarks on the plan to relocate tigers, he suggested that it should improve the conditions in Ranthambore and Sariska. These sanctuaries are big revenue earners due to very high tiger visibility. Relocating tigers will impact footfall, which will ultimately affect the livelihoods of people.

“We have a limited number of cats and if they are scattered in different areas, apart from logistical problems, the transportation stress may cause an adverse effect on their physiology and behaviour. In this way, we are making them more vulnerable as seen in the death of a tiger which was shifted from Ranthambore to Sariska. The tiger was relocated in April 2019 to balance the sex ratio there but it died in June. Forest officials said that the cause of death was heatstroke but conservationists blamed it on an overdose of tranquillisers,” Chaturvedi said.

Dinesh Durrani, founder secretary of the Sariska Tiger Foundation, said relocation of tigers to new places will create another human-tiger confrontation. “Instead of looking for new places, the government should improve the existing habitats of tigers and resolve the problems faced by them. Take the example of Mukundra where they have released tigers but not made arrangements for their prey.”

On the issue of relocation of villages, he said that uprooting communities which have lived for three generations in a particular area is the most difficult task. “You need to understand the psyche of the villagers. Their ancestors lived and died in the same village. The emotional attachment to the land, which they and their ancestors tilled, is so strong that monetary compensation alone will not be enough to make them leave their village. The government needs to take a humane and holistic approach. The bigger issue is of livelihood. The government must have a dialogue with them and address their reasonable demands.”

Most wildlife experts say this plan of relocation is a non-starter. Today, William Blake’s Tyger is not burning bright but staring at a dark future.