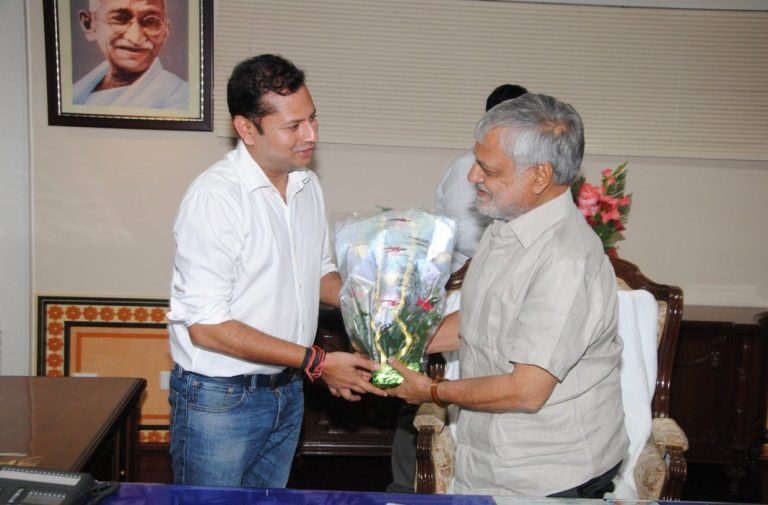 After his disastrous debut in politics, Vaibhav Gehlot, son of the Rajasthan chief minister Ashok Gehlot, is all set to begin a new inning in state cricket politics.

Vaibhav contested Lok Sabha election from his father’s citadel Jodhpur but got severe drubbing at the hands by BJP’s Gajendra Singh Shekhawat when he lost by more than two lakh votes and even lost in father’s assembly segment of Sardarpura.

But CM Gehlot, who has been hailed as the ‘Gandhi of Rajasthan’, has followed the path chosen by his fellow politicians in other states and launched his son into cricket politics.

First, Vaibhav was elected unopposed the treasurer of the Rajsamand district cricket association whose president is the current Rajasthan Cricket Association (RCA) chief C P Joshi, who also happens to be the speaker of the Rajasthan Legislative Assembly.

Of course, Vaibhav’s entry into Rajasthan cricket politics was no smooth as his election was challenged by none other senior Congress leader and a bitter foe Rameshwar Dudi, who was elected president of the Naguar district cricket association.

This brought the infighting in the Congress in the open. Joshi as RCA president refused to recognise Dudi as president of Naguar district cricket association as he had the tacit backing of Rajasthan Deputy Chief Minister Sachin Pilot and the Lalit Modi faction.

This triggered a battle of sorts with rival factions appointing election officers of their choice and challenging the voters’ list. Finally, the BCCI had to intervene and appointed RR Rashmi as the election officer.

On Tuesday around 2 am, Rashmi released the voters’ list, which clearly mentioned Vaibhav’s name and at the same time disqualified Alwar, Naguar and Sriganganagar associations for their links with Lalit Modi. With this unopposed election of Vaibhav as the president of the RCA has become a foregone conclusion. Election to various posts of RCA will be held on October 4.

However, what has baffled most political observers is a sudden change in Gehlot, who till now had an impeccable political career and unlike many other politicians, members of his family were always kept away from the political limelight, has decided to bring his son in the forefront.

They also question the timing of catapulting Vaibhav as the president of the RCA because CM Gehlot is facing two crucial by-elections which can impact his stature as the tallest Congress leader in the state.

Mandawa and Khinvsar, two Jat-dominated  assembly constituencies, are going  to polls on October 14.

Dudi, who is also a Jat, has come out openly against Gehlot after his nomination papers for the post of RCA president were rejected.

Dudi, launching a blistering attack on Gehlot, even compared him with Dhritarashtra of Mahbharata. “Putra moh mein Dhritarashtra ne ksa khel racha, Mahbharata deklo” (For the love for son, Dhritarashtra has created what game, see Mahabharata).

What was supposed to be a battle for cricket post has turned into Jats vs Gehlot as Hanuman Beniwal, chief of Rashtriya Loktantrik Party, also jumped into the fray and through social media urged his followers to support Dudi.

Incidentally, Beniwal, a Jat leader, who had joined hands with the NDA before Lok Sabha election, has vacated Khinvsar assembly seat after being elected MP.

The BJP keeping an eye on these two by-polls had appointed Satish Poonia, a Jat as the state president. Lamenting on factionalism and infighting in the Congress, Poonia said that if Dudi wants to join the BJP, he is welcome. “Our doors and windows are open for him,” Poonia.

Anil Sharma, a senior political analyst, said he was not surprised by the way Gehlot has gone to ‘adjust’ son Vaibhav as he is aware that this is his last term. “First, he got him Lok Sabha ticket from his home district Jodhpur, where he failed and now he is pushing Vaibhav into the state cricket administration,” he said.

The worst part, Sharma said, is the timing. “Gehlot has chosen a bad time to push his son into RCA because it going to have political fallout on two crucial by-elections.

A senior journalist, who has covered Gehlot extensively, said: “Since his return from Delhi where he was organisational secretary of the All India Congress Committee, Gehlot looks a changed man “.

He says Gehlot is aware that he is playing last innings of his political life and at this stage, he has started behaving like a ‘typical old Congress leader’ when he got Lok Sabha ticket for his son from Jodhpur where he (Vaibhav) failed miserably.

“Pushing Vaibhav into cricket politics is also on the same pattern. This is happening all over India where politicians are trying to get their kin elected to cricket associations,” he said.

He says the man (Gehlot), who is called Gandhi of Rajasthan, is going against the grain. “I am afraid that the phrase ‘For want of a nail the kingdom was lost’ should not come true in this episode.”