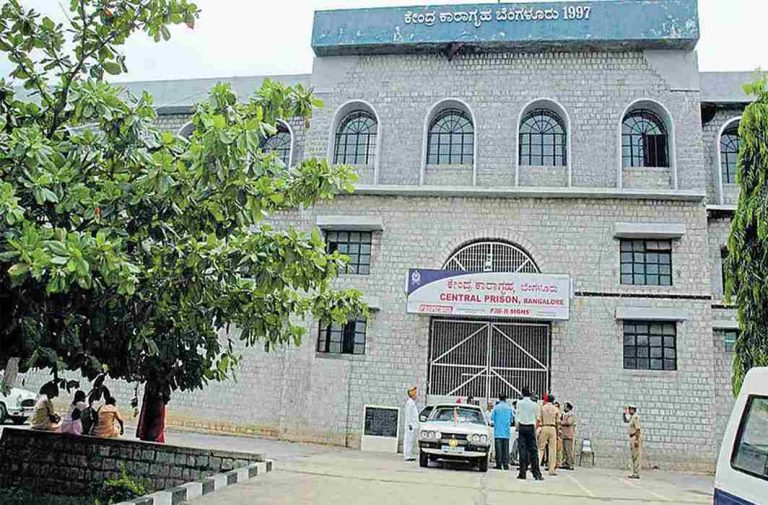 Above: Parappana Agrahara Central prison, Bengaluru, where Sasikala is jailed

India’s jails are overcrowded – anywhere between 150 per cent and 600 per cent of their sanctioned capacity. Adding to the woes of the country’s almost half a million prison inmates packed like sardines in a tin, 30 per cent of the nearly 78, 000 sanctioned strength is yet to be filled. And this anomaly, according to some retired police officials, provides ample room to exploit the system by inmates who have the resources to make themselves comfortable (read: receive VIP treatment) inside India’s nearly 1,400 jails.

In July 2017, within days of taking over as Karnataka Deputy Inspector General of Police, Prisons, Karnataka’s first Kannadiga woman IPS officer Divakar Roopa reported her observations from her prison visits to the state top brass in her department and the home minister. Just a few months earlier, in Feb 2017, the 40-acre Parapanna Agrahara Bengaluru Central Jail had welcomed three “VIP” inmates from the Tamil Nadu capital, Chennai, 350 km away.

On Feb 14, 2017, delivering a 560-page judgment, a Supreme Court division bench of Justices Pinaki Chandra Ghose and Amitava Roy sent Vivekanandan Krishnaveni Sasikala [or VK Sasikala] and two of her relatives to Karnataka’s biggest jail in Bengaluru. The two judges set aside an earlier order of the Karnataka High Court that had stayed the conviction of Sasikala and three others by a trial court in a disproportionate assets case.

Sasikala, 60, was the general secretary of AIADMK and a close aide of J. Jayalalithaa, the former Chief Minister of Tamil Nadu, who headed AIADMK from 1989 until her death in December 2016. Sasikala, with no political background, seemed to have learnt the art of making friends and influencing people early in life: her marriage to a government public relations official M Natarajan was presided over by DMK supremo M Karunanidhi, a known political rival of Jayalalithaa. Sasikala got to know an IAS officer, VS Chandralekha, who was very close to Jayalalithaa, and very soon threaded her way into becoming Jayalalithaa’s constant companion. Perhaps, the only reason why Sasikala didn’t succeed in her bid to become Tamil Nadu chief minister after Jayalalithaa’s demise is because the apex court nixed her chances by convicting her in the DA case.

The apex court had found Sasikala and her co-accused – Ilavarasi (her sister-in-law) and VN Sudhakaran (her nephew) — guilty of conspiring, laundering and amassing illicit wealth worth about Rs 66.44 crore in the 1990s in a criminal conspiracy, hatched along with Jayalalithaa. The three were sentenced to a four-year jail term.

Sasikala, who was denied special privileges by the court, slept on the floor the first night in her cell in the Bengaluru jail. Karnataka chief minister at that time, Siddaramaiah, had asked his officials to provide her a mat and a pillow if it was under the rules. He later clarified that he hadn’t sought special treatment for her or her aides.

A few months later, after IPS officer D Roopa, took over as DIG Prisons in Karnataka, she flagged the issue of Sasikala and her aides getting special treatment in the prison in her internal report in July 2017 to the home department and her main boss, Director General of Police [DGP] Prisons HNS Rao. Roopa’s allegations, based on her visit and interactions at the 2,000-capacity prison that was overrun with 4,000+ inmates, even though it was the largest in the state, got Rao’s goat because she had alleged that there was a talk of Rs 2 crore exchanging hands for Sasikala and her aides to ostensibly enjoy VIP treatment there.

An admirer of retired IPS officer Kiran Bedi, now Puducherry Governor, Roopa’s internal report found its way into the media forcing the Siddaramaiah government to transfer her and Rao out of the department and ordering a probe by a retired IAS officer, Vinay Kumar into the allegations. Rao, stung by the insinuations, slapped a Rs 20 crore defamation suit against Roopa. She, in her reply, maintained that she had named Rao as the recipient of the bribe. The government had also asked the Anti Corruption Bureau [ACB] to investigate and give its findings.  Rao, who has since retired, must pin his hopes on the ACB completing its investigations.

Although the one-man commission of Vinay Kumar had submitted its 295-page report in Nov 2017 itself, it is only now that excerpts of the report have trickled into the media since they were made available to an RTI activist by the home department. Kumar’s report alleges that prison officials had falsified several records for Sasikala and her sister-in-law Ilavarasi. Like an entire corridor with five rooms being left empty for Sasikala’s use, under the guise of providing security to her. Or how Ilavarasi had a visitor who stayed more than the permitted 45 minutes, violating Rule 601 of the Karnataka Prison Manual 1978. Or the presence of cooking vessels in Sasikala’s cell, though food was to be consumed from the jail kitchen. Vinay Kumar’s report is filled with “evidences” and “documentation” provided to him by Roopa herself.

Reacting to the media reports, Sasikala’s advocate A. Ashokan has been quoted refuting the allegations in the Vinay Kumar report shared by the RTI activist: “Sasikala has not violated any rules of the Karnataka prison’s manual any time. She is wearing personal clothes as per the prison rules. The allegations are all wrong.”  The advocate added that he would react after going through the official report.

With Rao retired, Roopa transferred out of the prisons department and the ACB yet to nail the person/persons linked to the Rs 2 crore bribery talk as alleged by the IPS officer, there is a need to urgently address the larger issue of prison overcrowding and quickly filling the jail staff vacancies on a war footing.

India has 33 prisoners for every one lakh population. While pre-trial detainees comprise about 67 per cent, female prisoners are around five per cent of India’s approximately half a million-prison population. Among the 1,400 jails in the country, there are only 18 women’s jails and 134 central jails.

In May 2018, hearing a matter regarding inhuman conditions of jails in India, a bench of Supreme Court Justices Madan B Lokur (now retired) and Deepak Gupta lambasted the state Governments and the Union Territories to fast track reforms to ensure prisoners are not kept in jail like animals.

“What is the point in talking about prison reforms when we cannot keep them in jail? We should release them, if you cannot keep them properly… It is unfortunate that the prisons are overcrowded. Prisoners also have human rights and they cannot be kept in jails like animals,” the two judges had said.

With a majority of the prison population comprising of under trials, the bench had said the high number showed the failure of the Under-Trial Review Committees [UTRC] which need to take their responsibilities seriously; inmates have got bail but cannot be released as they cannot furnish sureties. In some cases, people are imprisoned for petty offences under which they should have got bail long ago.

The UTRCs, set up in every district, deliberates and recommends the release of under trial prisoners and convicts who have undergone their sentences or are entitled to be released from jail on bail or remission granted to them.

The apex court had, through orders of May 6, 2016, and Oct 2, 2016, directed preparation of a plan of action by States and UTs to deal with the issue of overcrowding in prisons. The proposal was to be submitted by Mar 31, 2017. Not one State complied.  Even warnings of contempt notices to the top honchos in charge of prisons across the country did not elicit the desired actions in time.

The Vinay Kumar report, in addition to showcasing the malady afflicting the Karnataka capital’s main jail, could also help address the Supreme Court’s major concern regarding prisons in India irrespective of who the inmates are: Sasikala or thousands of less known folks locked up with no way out.